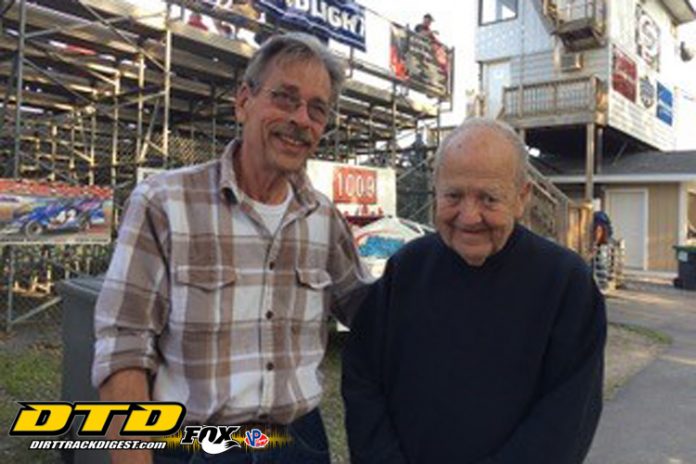 On Friday night at the Great Race Place we had the pleasure of sharing a special night with John Grady.  We have known John and the Grady family for many years and have many fond memories of John and his photos and stories of racing from across the country.  The Grady Vintage Photos trailer and tent were set up with many, many albums of vintage racing photos and many people came by to share their stories and memories of John.  John is currently suffering with dementia and did not know many of the friends that came by to see him.  It’s very unfortunate that this disease steals the memories of people like John who have so much to give from just their memories alone.  This did not stop John’s friends from sharing their own memories of John and his racing photography and his dedication to racing.

Dave Barton was just one of the many that had John Grady stories to tell and his was quite typical of many.  In the early seventies, Dave got the racing bug when he hung around a local garage with Jack Johnson.  His first car was a Late Model and he raced until he was drafted into the Army.  When he returned after serving he built a 1974 Tobias Modified from what was then a kit car and raced it occasionally at local tracks, when money allowed.  Dave’s memories of John Grady was that he would always come around the garage and talk with the young racers and occasionally Dave got mentioned in John’s auto racing column in the Schenectady Gazette.

“He always made you feel special, even though I was not a top runner,” said Dave.  “I will always remember that.”

Dave remembers Chris Grady also, when he worked the photo both at local tracks with his parents.  Dave was laid off from a job in the Capital District in the early eighties and decided to go to Charlotte, N.C., where he got a job with UPS Freight and drove for 37 years.  But he still keeps up on local racing through DTD and when he realized that he would be in the area in August he decided to stay one more day to make the trip to Albany Saratoga on Friday to give his thanks to John for his friendship in his early years. Friday turned out to be a night of memories. When we went to the tower for the nights racing we ran into Jerry Townley another area racing pioneer.  Jerry and Ed sat and reminisced over the Grady vintage photos that Ed had purchased earlier.  Also in the tower was Bob Hackle and Brian Ross who shared their memories of racing’s early days and the many tracks where they competed.  It was a great group of stories of traveling all over the Northeast to compete multiply nights of the week.  Bob Hackle became known as Mr. Mini Stock and said he had approximately 400 wins in his career, and this was only an estimate.  He never kept track.  Brian Ross was a winner and champion on asphalt and raced all over the Northeast at the asphalt tracks.

“We all knew each other,” said Brian.  “The dirt and asphalt racers kept track through the trade publications on who was winning and where.  The camaraderie among racers back then was strong.”

Earlier in the week we heard that Jim King was on his way back to his residence in Texas and would not be returning next summer as announcer in the area.  We called Jim to confirm and he did but also noted that if he did return it would be only to visit.  Jim King has been calling races at area tracks for 45 years.  He is probably best known and associated with Fonda and is known to many as the “Voice of Fonda.”  Jim has mentored many young announcers, many who are behind the mic today.  He and his wife, Joy moved to Texas a few years ago and took up residence there only returning to the Capital District in the summers where they stayed in their camper at Caroga Lake.  This years weather made it that much easier for Jim and Joy to decide that they had really become comfortable with the warmer weather in Texas and would not make the trip next season.  Ed spoke to several people at the Ridge on Sunday about Jim’s departure.  The head of the safety crew, Terri Morman, knew it was coming but didn’t think it would be this quick.  She said it will be a real void at both Fonda and Glen Ridge.  “He was every driver’s friend.”  Car owner, Tommy Spencer said it’s a loss of an institution at Fonda Speedway.  Jim has been one of our favorite people we’ve met in racing over the years and we were inducted into the Fonda Speedway Hall of Fame with Jim in 2015.  We will miss him and we wish him and Joy good health and good fortune in Texas. Sportsmanship is not dead.  On Sunday at Glen Ridge Pro Stock driver, Todd Hoffman stepped up to give fellow competitor, Dennis Joslin a ride this week after Joslin crashed his car last week.

This Thursday will mark the 41st running of one of the richest and longest running racing events in the area.  Mr. DIRT Track USA on the high banks of Lebanon Valley this year will run 101 laps and pay $17,500 to the winner.   Throughout it’s history the event has had 19 different winners with Brett Hearn winning over one quarter with eleven.  Kenny Tremont has four Mr. DIRT Track USA wins, Andy Bachetti and J. R. Heffner, three each and Billy Decker, Jeff Heotzler, Tommy Corellis and Merv Treichler each have two and eleven other drivers have one each, Les Alberti, Ed Delmolino, Mert Hulbert, Win Slavin, Donnie Ackner, Kenny Brightbill, Mark Fluery, Rich Ricci, Jr., Danny Johnson, and Stewart Friesen.  Last year’s winner was Matt Sheppard.  This year Sheppard comes into Lebanon Valley for this event with 32 wins on the season at ten different tracks.  Matt reached 300 career wins this past weekend.

An international note from this past weekend, Australian, Peter Britten won the Modified feature at Albany- Saratoga Speedway on Friday and then went on to Sharon Speedway in Ohio to pick up the win there on Saturday.