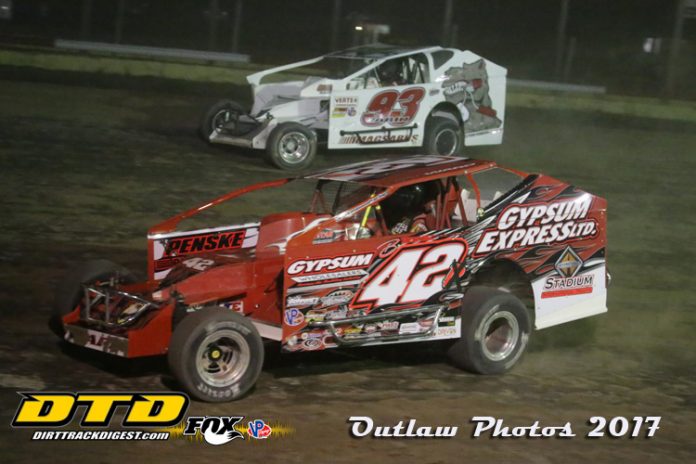 Okay so it was supposed to be a regular normal show at Utica Rome as the month of August came to a close.

It was one of those nights that it was simply fun to be at the Utica-Rome Speedway.

Larry Wight won at UR on opening night, but decided due to work commitments that Sunday night was simply too much for his schedule.

He drove into the pits in his red pick up truck and wasn’t even there to race.

Larry was on hand to crew chief for good friend Pat Ward as it appeared there might not be a crew. However, two of the guys showed up and Pat asked Larry to run the back up car to break in some new tires. So Larry borrowed one of Pats old driver’s suits and went racing.

A few weeks ago Larry raced in a benefit event at Frozen Ocean go kart track and fortunately he left a helmet, gloves and shoes in the pick up truck.

Well, what transpired was something totally unexpected.

It was the first time he had been back to the track since the Super Dirt Series show and ironically he lined up alongside the 9s on the start of the main. As the green came out Larry got a couple car lengths on Sheppard and it was fortunate as when the field got between one and two there was a jam up and Matt got into the back end of a slowing car and then got hammered in the rear end by Darwin Greene.

Sheppard went to the pits, returned 14th, and fans were ready for that patented run from the back. Matt did salvage fifth, but he has the track crown cemented.

By the midway point Wight had passed Danny Varin and was on his way to his second UR win of the year.

In victory lane starter Matt Burdick looked in the cockpit and was stunned. He said, “I thought Pat Ward was driving”.

Larry noted, “We saw 10 cars go out for hot laps and wanted to add a car to the field. Pat fired me as the crew chief and gave me a car to race.”

The win didn’t come without difficulties as he explained, “Around the 14th lap the right rear got full of mud and I had to be patient. I have old roots here at Utica Rome and it was cool to win in the 42P. The old car still works.”

Interestingly enough the ride might have come to an end and Wight’s win might never had happened. In his heat Pat Ward slowed suddenly coming off of turn four, pulled alongside the wall and coasted to the pits.

Later I was told he had no brakes and the guys were able to fix it to get that car back on the track and keep Larry in the back up.

Charlie Tibbitts has been driving Sportsmen for a while, but the 13-year-old eighth grader never experienced winning a Broedel Energy Sportsman main at UR until Sunday night.

The race was packed with surprises as rookie Jeff Taylor led early and chasing him were A.J. Miller, A.J. Filbeck and Tibbitts.

The 16-year-old Miller and Tibbitts were able to break away.

From there is was a solid clean side-by-side race that was simply fun to watch with Charlie winning by 1.8 seconds.

Tibbitts in victory lane simply said he couldn’t find words to describe how he felt and that he just hoped, “I didn’t screw up late in the race.”

He not only didn’t screw up, but became the youngest feature winner as the previous mark was held by 14-year-old Jessica Zemkin.

Jim Normoyle will soon be the father-in-law of A.J. Walters and with five laps into the Pro Stock main Jim was leading.

However, moments after taking the top spot Jim rolled off the bank between one and two and A.J. had the lead.

He held on to win his first feature event at UR in what was a night of firsts.

In victory lane A.J. was extremely emotional, but as soon as he hopped out of the car there was Jim Normoyle to lift A.J. up in the air in celebration.

A.J. noted, “We haven’t had a good season, but did okay last week in the KOD show and this is special.”

He thanked everyone and then everyone again as he was simply overwhelmed with the victory.

Interviews with first time winners are always fun and Charlie and A.J. will never forget those moments.

16 Mods, 24 Sportsman,12 Novice and 14 Pro Stocks in the pits. The numbers were low on cars, but action well worth the night at the track…

Sportsman added to the field included Tim Schneider Jr., Dorian Wahdan and Devin Willis moved up to the regular class…

Rogers was in the Tom Juno 25…

Tough break for Jeff Taylor as he was running fifth in the Sportsman main, but got the front stretch wall on the 16th lap ending his night. He noted he has been having steering problems, but felt they have been straightened out. He finished second to Chris Mackey in his heat…

Dale Planck was in the A.J. Miller pits helping out…

Mike Maresca was third with a season best run…

Pat Ward chased Maresca throughout the closing stages, but the 42P had to settle for fourth…

Attempts were made to reach out to Sheppard to see what happened to the car, but as of sending this for print he still hasn’t gotten back with any information…

Time changes hit Utica this week and the week after. The annual Labor Day weekend Empire Super Sprint visit will be on tap with Mods, Sportsman, Pro Stocks and Novice with race time at 6 p.m…

The following Sunday at 4 p.m. racing will start with the one division Ultimate Sportsman Shootout spectacular…

Any news or comments please send along to foley395@hotmail.com