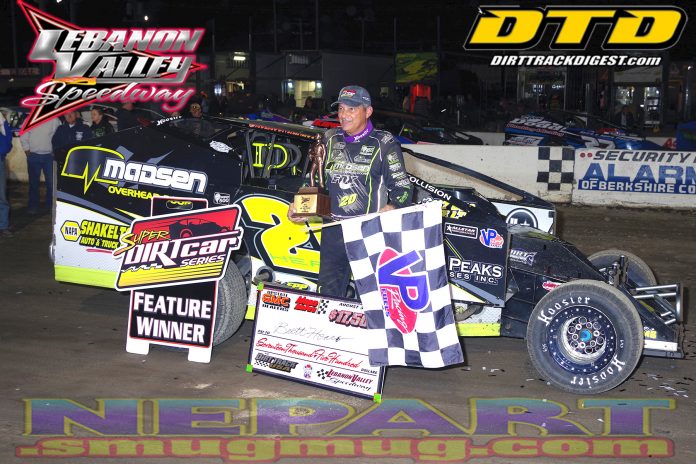 WEST LEBANON, NY- “We can cross that off the list now right?” said Hearn in his post race interview. Earlier in the day Hearn was asked if he was concerned with his long dry spell of not winning on the Super DIRTcar Series, Hearn summed it by saying succinctly, “It’s my race to loose.”

Hearn, who at the time of his win was 58 but as the clock struck midnight, he turned 59. A pretty special way to celebrate your birthday. Some might joke he had 17,500 birthday candles on his cake. Either way you slice it, Hearn not only is eating his cake, he made it, baked it and is spending the day blowing out his candles and opening the envelope which contained a rather nice birthday gift, $17,500. There would be no sharing of his “cake” for the other competitors in the field.

Keith Flach and Eddie Marshall, both Valley regulars, shared the front row of the star studded field of 30 drivers. With the drop of the green for the 101-lap feature event it was Richfield, Conn., Eddie Marhsall setting the early pace aboard his self owned Marshall Oil Company 98. A blistering early race pace allowed Marhsall to take early command of the race while Keith Flach settled in for 2nd.

Hearn, laser focused on ending his drought, started seventh and with the drop of the green he started is relentless assault on the field. Just four laps in he was fourth, and while Marhsall was out front putting some distance between himself and Flach, Hearn was on a mission and soon would let the leaders know he was coming to the front whether they liked it or not.


Chad Jeseo brought out the first yellow flag of the night on lap 14 when he got out of the groove in turns three and four while battling with Larry Wight. Jesseo smacked the rear of his car into the wall and then the front end slapped it. Suffering a flat tire, Jesseo came in and changed it but just a few laps later called it a night. Jesseo was running in eighth at the time of his accident.

Caution laps were counted until lap 75, so the field went back to work on lap 19 and Hearn took advantage of some track position and like a man with no fear, did a daring cross over move in turns one and two allowing him to go from third to first in a matter of seconds as the field exited turn two and charged down the backstretch.

As the lap counter hit 30, Tyler Dippel shredded a tire leaving a trail of debris down the front stretch bringing out the second yellow of the night. Once again the field regrouped and Hearn picked right up where he left off. With 50 laps in the books it was Hearn, Marshall, Friesen, Tremont and Flach were your top five runners.

With Hearn in another galaxy, the wick was turned up on Marshall for second. With 56 laps in, Stewart Friesen could draw in on Marshall but couldn’t pass the potent No. 98.

The real action in the race was coming from way downtown. Mike Mahaney who started 28th on the grid was marching his Buzz Chew sponsored Chevy to the front. With 71 down, he already climbed to 13th and was coming for more. With 80 laps of 101 in the books, Hearn was lapping cars at will. He held a nearly full straightaway advantage over second place runner Marshall. With 85 laps in, only 12 cars were left on the lead lap.

The last caution for the night would come out on lap 89 for Matt Pupello who slowed in turn one and two with a flat tire. With 12 laps left in the 101 lap affair, Mahaney was still charging to the front. With 92 laps in, Mahaney was now up to ninth and over the course of the last nine laps, he would pass more cars finishing the race with a stellar 6th place finish which eventually became a top five when Flach failed to make weight in the post-race.

On the front end though, Hearn took the restart on lap 89 and continued to pound the field into submission. He was never challenged for the lead after taking the lead on lap 18.

“This is a good win for the entire team” said Hearn. “When your hearing the talk of when is he going to win again on the Series, it’s no better time to end the drought than right here with the biggest paying show of the summer,” Hearn said. Hearn scored his 121st career Super DIRTcar Series win and added to his already overwhelming career stats with win number 903.

Second place finisher Marshall was slightly disappointed in his runner up spot. Earlier in the season at the Valley, Marhsall was involved in a crash that destroyed his car which forced them to go out and pick up another Teo.

“While this wont help fill in the hole with the budget this year, but he (Hearn) was really running. We got tight in the middle of the race and I was laboring with that. As the race wore on the tighter it got. I knew if I was dead on I wasn’t going to go by him too easy, he was the class of the field”.

It marked a career tie for second place in the Mr.Dirt event.

Third place finisher Stewart Friesen was happy considering all things. “To be the first outsider, I love coming here, love racing here and to have a top three with those guys is good,” said Friesen. “We were close there with Eddie (Marshall) but Brett (Hearn) was pretty much lights out. We are happy for the Halmar (International) team. We kind of righted the ship a little bit on the series here. We’ve been working really hard in the shop the last couple weeks. I think we are on to something, we got some grip. I’m looking forward to see how that works out on Monday at Weedsport (Speedway).”

While the streak was broken for Matt Sheppard at five in a row, Sheppard did bring the car that catapulted his late season charge in 2016 allowing him to win the 2016 edition of the Mr. Dirt event. He ran the same car that he brought here last year…

Mahaney, of Kings Ferry, N.Y., was the ultra bright spot other than the winner of the event Hearn. Starting in 28th spot, Mahaney drove his relatively new Bicknell Buzz Chew Chevy sponsored car to an incredible 5th place finish. (Originally 6th but Keith Flach was dq’d from 5th for being light allowing the field to move up 1 spot.).

“I need to do better at qualifying,” said Mahaney. “I have limited experience here so I was at a disadvantage. Plus when the sun was out my car felt like it wasn’t touching the ground. I felt I didn’t have any grip but when the sun went down and the track cooled a bit the car had bite and I could feel it in the seat that there was traction.”…

Elmo Reckner, who is barely getting by with the last weeks of the season due to engine troubles, is thinking of retirement.

“I run two body shops and to run two nights a week with two different cars and not enough help is straining me. Plus it costs a lot of money to race here weekly at the Valley. If anything I would consider running a 358 at Fonda but we need to see what the rules are going to be for 2018, but one thing is for sure we are probably going to cut back on our racing in 2018.”…

Kenny Tremont took possession of a new Troyer TD4 frame and body while at the Valley. Troyer’s Billy Colton brought the new chassis down for Tremont. It will be used for Oswego and Eastern States.

“I haven’t even laid on eyes on it let alone drive one yet,” said Tremont. Tremont has been a long time Troyer loyalist. In fact, Tremont said he had the 34th Troyer ever made early in his career. While in later years Tremont did switch to Bicknell, he’s now well entrenched in the Troyer camp again…

Lebanon Valley regular Wayne Jelly had a night to forget. He rolled over in his heat race causing extensive damage to the front end suspension. He didn’t race any further in the evening but was uninjured in the crash…

Ryan Godown was making a very rare apperance in Super DIRTcar Series action. The Ringoes, N.J., native was aboard a newly acquired ride that will be used only for Oswego and Eastern States. He was piloting the Dieter Schmidt owned, iconic # 5 entry. Godown made the feature but was never a factor and retired before race ended. Lebanon Valley served as a shake down test…

Tyler Dippel had a distributor issue in his heat race. He will race at Eastern States and World Finals. He was uninterested in running at Oswego due to the carnage that unfolded there last year…

Hearn is Unstoppable at The Valley

With the point chase ending this Saturday night, Hearn has already wrapped up another title so there will be no drama on Saturday night. 12th career track title, 101 career wins at the Valley.

“I hit my driveway at home at about 745am. I went in showered, changed and went to work and got there at about 11am. Then we went to Malta. I was able to catch about an hour of sleep there and then we raced and went home. Its a good thing I know the boss well,” said a smiling Flach.

According to Larry Wight, fellow teammate Pat Ward is looking fit and trim these days.

“He runs about three miles a day or gets on the stationary bike and rides about 10 miles a day.”

According to Wight, Ward has lost about 20 pounds since last winter.