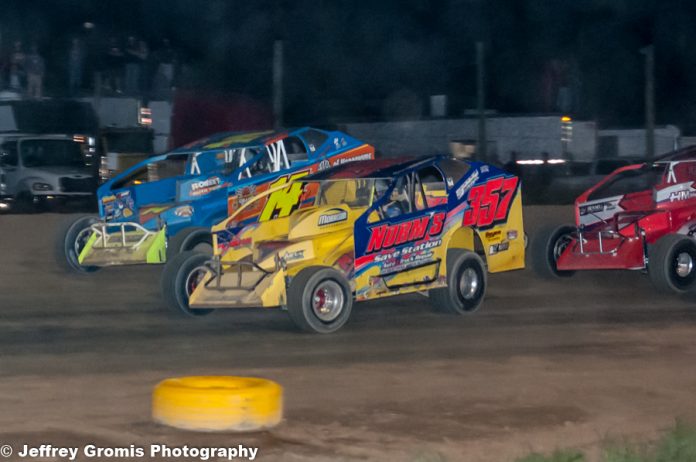 GEORGETOWN, DE – Duane Howard has won a lot of big races in his long career but the one thing he hasn’t done is win a race on the Short Track Super Series South tour. Howard has been a constant presence on the tour since its inception in 2015 missing only two races late in 2015. In 2016 Howard finished the season third in the season long point’s battle but hadn’t won a race. This year Howard been very consistent on the STSS South trail sitting in the top five in points going into the Georgetown race.

On Wednesday night Howard finally accomplished what he and his Norm Hansell #357 team had been trying to do all year by winning the 4th annual “Blast at the Beach” race. The Blast at the Beach is a co-promotion between Georgetown promoter Brett Deyo and ERK Steering Repair owner Eric Kormann. This year’s race was delayed a day due to heavy rain that hit the speedway on Tuesday but that did little to dampen the spirits of the fans and team going into to Wednesday.

After pole-sitter Danny Johnson was forced to scratch from the feature it was David VanHorn and Ryan Godown bringing the field to the green to start the 35-lap feature event. VanHorn got the early jump and grabbed the lead with Godown right in tow. The race was slowed early as the caution flag was displayed numerous times for minor incidents. As the race was about to get going again after just two laps had been completed starter Warren Alston was forced to throw the red flag when Brett Kressley bounced off the front stretch wall and ended up flipping his #19K. The Kressley car landed on its side and once it was back upright Kressley quickly exited the car and started the long walk back to the pits thankfully okay.

When the race resumed it was Godown getting the jump on VanHorn to take the lead. Sixth place starter Howard was on the move and started to put pressure on VanHorn for the second spot and within a few laps moved past VanHorn and set his sights on Godown. Yellow once again slowed the field and that proved to be the break Howard needed.


Howard timed the restart perfectly and jumped on the gas just as Godown put the hammer down allowing Howard to stay with Godown coming out of turn four and down the front. With Howard on his outside Godown couldn’t take the line he wanted going into turn one allowing Howard to use all the power his Morrison open small had to take over the lead. To add insult to injury, Godown washed up the track ever so slightly going through the apex of the corner allowing VanHorn and Watt to both get by the Ringoes, N.J., driver.

Howard talked about the restart and how he was able to get to the front.

“I was really good on restarts tonight. I took off on that particular restart and I couldn’t spin the tires if I wanted to. I knew if I could clear Ryan (Godown) getting into (turn) one with a nose in front I thought I would be able to roll one and two and I did. The key was getting a good run off of turn four and thankfully I was able to do that.”

Howard continued to lead with VanHorn and Watt battling behind the leader for second place. Watt was finally able to work his way into second setting his sight on the leader Howard. Watt was able to pull up to the leader but with the track was starting to take rubber down low rendering the outside pretty much useless for Watt to make a move on Howard unless the leader made a mistake which doesn’t usually happen when a driver with Howard’s experience.

I talked to Howard after the race in his trailer and the driver was very happy to get a win for car owner Norm Hansell and the entire #357 team and hoping it is a start for his team to get on a roll.

“It was a good win for this race team. I have been saying all along that we have a good race team. We’ve been finishing but we just can’t win, tonight we were finally able to do everything right and win. It seem like we’ve been fifth or sixth every time we show up at a race track but that’s not what I want, that’s not what Norm wants and it’s not what this team wants. Finally maybe we got this monkey off our back and we can carry this momentum into the some of these big races coming up in the next two weeks. We needed this win really bad. We’ve been in a win drought all summer. This Bicknell car that we have been using for traveling to these big races has been quick all year but we just can’t seem to be able to catch a break and some of that has been our own doing.”

I asked Howard about his teams plans for some of the season ending bigger races coming up in the next couple months and was told that the team wasn’t sure of what their schedule will be.

“We just want to get focus on these big races like the Coalcracker and the 76er and try to win them. After that we’ll see what we want to do. We have enough equipment sitting there so we can race elsewhere and it’s just a matter of where we decide to go.”

Another Georgetown Race, Another Second Place Finish for Ryan Watt

Watt keeps wondering what he has to do to finally get a win at the Georgetown Speedway. Watt has had numerous second place finishes over the last two years but just can’t seem to find victory lane at the Delaware facility. Watt ran another good race on Wednesday doing all he could to get past eventual winner Howard.  He just didn’t have enough on this night.

Watt who started the feature in the fifth spot challenged early in the feature before having a couple of issues dropping him back to the eighth spot. Watt being the competitor and veteran he is regrouped and gathered himself back in and went back to work to get him back into contention.

Watt talked about his early race issues and what caused him to fall back in the field.

“I just was in the wrong place at the wrong time there. The one lap there I was up on the top and the car in front of me slowed causing me to lose my momentum and a couple of cars got by me. I then went down into three there thinking I could use the outside to get a couple of spots back but the car sort of hopped on me and I slid up over the berm and lost some more spots. At that point I just had to calm myself down and start to pick them back off.”

Once Watt got going he started to make his mark on the race quickly getting by Von Dohren, Mills and Friesen to get back up into the top five. After the restart when Howard took the lead both Watt and VanHorn took advantage of a mistake by Godown to move up to second and third. Watt and VanHorn then waged a thrilling battle for the second with Watt eventually winning out to grab the runner-up spot.

Watt quickly moved in on Howard and started to pressure the leader but with the track starting to go away never was able to mount a serious challenge for the win.

“Once I was able to get by VanHorn for second I was able to close in on Duane but by then there wasn’t enough track left to pass him. The only way I was going to get by him is if he made a mistake but that is very rare for him to do. The only thing you can do at that point is stick with him and see if something happens but it didn’t tonight. I was hoping we would catch the lapped traffic before the end of the race because you never know what can happen with that. If we did get to the lapped traffic and he got slowed up on the bottom, I was definitely going to try the top but we never got there.”

Overall it was another good run for the Boyertown, Pa., wheelman who now has assumed the STSS South points lead by one point over Friesen who finished seventh on the night.

It hasn’t been the best of years for David VanHorn starting with a hard flip at the “Hard Clay Open” real early in the season but the veteran VanHorn has battled through it all and is steadily making progress as the season ending major races are about to thrust upon us.

VanHorn led at the start of the feature until getting passed by Godown on a restart dropping him back to second. VanHorn continued to run in the top five throughout the night as he diced with eventual winner Howard, Watt and Godown during the main event.

VanHorn would settle in running in third which is where he would finish the 35 lap feature.

VanHorn talked about his good run. “It was a good run for our team tonight. We were able to start on the pole because of Danny’s (Johnson) issue and get the lead early on. Then the track started to change and we got a little free. We had a good car but Duane was running real good and Ryan is always tough here. I ‘m happy with a third place finish, it helps us in the points and to get a third with the good field of cars that were here is a good deal. We’ll take it and move on to Bridgeport in a few weeks.”

It’s been a busy season for VanHorn not only racing but off the track as well. Earlier this year VanHorn left his job to start working for Vahlco Wheels leaving him with not quite as much time as he would like to work on his race car. Balancing a family, a new job and racing is not easy but VanHorn seems to make it work with the support of his wife and family.

They were 30 modifieds on hand for round #6 of the STSS South Series with Craig Von Dohren, Ryan Watt and David VanHorn. Each heat winner received a $200 bonus courtesy of Will Brown’s Truck Repair…

The points race in the STSS South Series is really heating up. After six events Watt has a scant one point lead on last year’s champion Friesen. Howard is close behind in third followed by Jimmy Horton, VanHorn and Godown who are all within 50 points of the leader…

The next event on the STSS South series will take place on the 5/8’s mile oval on September 30th. This will be race number seven on the series…