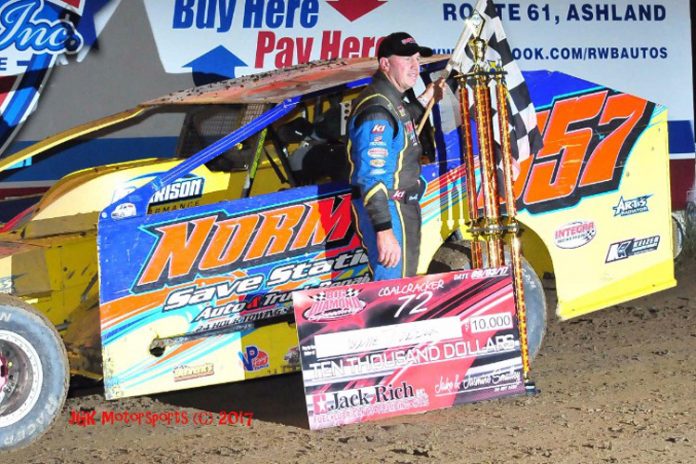 The 2017 racing season hasn’t quite gone like Duane Howard and the Norm Hansell #357 had it planned. Some drivers would be quite happy with the season Howard has had to date but the Howard/Hansell team expects much more. The team has won a small-block race in Delaware to go along with a big-block win at Bridgeport as well as two Thunder on the Hill shows at Grandview. The team is in the top five in points on the STSS South trail as well at both weekly tracks they compete at. But with the equipment the team has at its disposal both Howard and Hansell each expected more success and definitely more trips to victory lane.

But as the big end of the season money races approach us, it seems like the #357 team is finding its stride. Last Wednesday night at the Georgetown Speedway, Howard and the team dominated the second half of the race to win the STSS South “Blast at the Beach” race pocketing a cool $6510 into the team’s bank account.

Sunday night at Big Diamond Speedway, Howard once again drove his way to the front to capture the crown jewel of the Big Diamond season in winning the $10,000 to win “Coalcracker 72.”  It was seventh Coalcracker win for Howard and his first since 2010.

“The last time we raced here at the Prelude to the Coalcracker race we thought we found something in this race and we came back with the same thing and adjusted on that a little.  It worked to perfection. I could lay on the right rear like I like to.  It all worked out. This team is just starting to gel and I am really looking forward to the other end of the season money races.”


Howard steadily worked his way to the front from his ninth starting spot entering the top five on lap seven. Howard hung steady in the fifth spot until a lap 28 restart when he made a move and vaulted himself into third. With the fuel break approaching Howard was catching Pauch Jr for second and got by the second-generation driver with a move through turns one and two. Pauch Jr went into turn three hard to try and get the spot back and contact was made between the two drivers with Pauch Jr coming out on top relegating Howard back to third.

The yellow came out for the fuel break on lap 40 and after Howard exited his #357 he walked over to the #15 of Pauch Jr to express his displeasure with the contact that was made a few laps earlier. When the race resumed Pauch Jr grabbed the lead from Frank Cozze as Ryan Godown got by Howard for third. Howard never gave up and kept us his steady charge towards the front. First Howard bolted his way past Cozze for third.  After a couple of yellow flags he worked his way past Godown for second. After getting second, Howard started to rundown the leader Pauch and the two drivers were engaged in a hard-fought battle for the lead when the yellow again was displayed ending the crowd-pleasing duel.

Howard knew he had to make his move now. When the green flag came back out Howard did just that as he beat Pauch Jr into turn one to grab the lead on the outside. Once in front Howard took off looking like the Duane Howard of old that earned him the nickname “The Diamond Cutter”. Howard had to survive one more restart but it was no problem for the Oley, PA wheelman who easily sped off to take the big win.

“He (Pauch Jr) took my nose off of me going into the three and four early on there and I knew I had to beat that same car on the restart and we did. I was able clear him going into turn one.  I wasn’t about to let him push me up over the cushion. The restarts were tough all night and those two red cars were really getting physical with each other in front of me.  I just held back and let them play their cat and mouse game and let the race come to me.

“This team is a clicking race team right now, this team works really, really hard and the guys that go to the shop every night are the ones that deserve it the most. It means a lot to win this race. You know it’s the granddaddy of the Big Diamond season and along with the Freedom 76 race at Grandview those are the two big spec races around here and to win one of them is great. To win both of them would even be better.”

I asked Howard how it felt to win his seventh Coalcracker race of his career.

“It really makes me feel like I’ve been around a long time that’s for sure. For a while I didn’t know if I could win anymore but I got a lot of drive in me and I really want to win and we weren’t producing all year and I was getting frustrated. We could finish in the top five all year but that ain’t cutting it for someone like Norm who puts this car under me. He wants to win and I want to win and these are the races you want to win for sure. We seem to be riding a wave right now.  Let’s hope we can get some more before the wave crashes on us.”

The rivalry between Ryan Godown and Billy Pauch Sr has been well known over the years but with the two drivers not running against each other weekly this season the rivalry has been subdued. But never fear fans, the rivalry seems to have ramped up once again but only this time the son has taken over for the father.

Godown and Pauch Jr have raced together for two years at New Egypt Speedway battling for the track title each season. While I doubt there will be any Thanksgiving invites between the two drivers, they have done their best to respect each other on and off the track during the past two seasons. Sunday night during the running of the Coalcracker 72 the two drivers battled hard for the lead.

On two consecutive restarts on laps 50 and 52 it was Pauch Jr leading and choosing the inside putting Godown, who was in second, up on the outside. Coming down for the green both drivers were gunning for the lead as the sparks flew as the cars got together coming down the frontstrectch. Neither driver wanted to give an inch as they raced into turn one. Both times Pauch Jr was able to come out with the lead, but eventually Howard would get by both drivers to take the win.  Godown got by Pauch Jr to take away the second spot at the finish.

By virtue of both drivers finishing in the top three, they were forced to head to the tech shed after the race. The pair shared their displeasure with one another afterwards.

I spoke to both drivers afterwards to get their perspective on what happened.

Ryan Godown – “There’s just no respect out there on restarts. You start on the bottom you go to the bottom, you start on the top you stay on the top. Cozze had no problem with doing that, it seems like everyone else had a problem with it though. When you start on the bottom and go right across the track to the top you got to remember that. You have remember there’s a lot of big money shows coming up and it’s just not right to do that. We had a good enough car to win.  I was biding my time but when you get hammered like that and you get behind it’s hard to play catch up here. Luckily, we had a late restart and got by. But there’s just no excuse for that, people are better drivers out there than that. There are other people out there that ain’t happy with him either so it’s just not me.”

Billy Pauch Jr – “It’s just one of them deals. The restarts here are sketchy to begin with. Ryan was trying to pinch me down and I just took off. All I was asking for was for me to be able to control the race on the restarts. The restarts weren’t good all night I didn’t think. Like I said, it was sketchy out there. It’s just racing. I didn’t want to stuff him into the outside wall. I guess I got him in the corner but sometimes you lose track of where you’re at on these restarts. On the deal with Howard, I slid him there in three and four and kind of didn’t have him cleared and shouldn’t have done that so I was trying to be careful on the last restart there.”

Despite the incident with Pauch Jr, Godown was happy with this second-place finish.

Godown likes to win, make no doubt about that but after the issues the Searock #26 team has had at Big Diamond the past few weeks a second-place finish was good for the team and gives them some hope moving forward to the remaining 358 races of the season.

“We’ll take second, this car has been good all year but we’ve just had some stupid s**t happen that’s hurt us. I am very thankful to Steve and Diane (Searock) for giving us another opportunity to win the Coalcracker. We gave it our best shot and came up one spot short, second sucks but we were right there and we came from all the way back in eleventh.  I’m not sure anyone else came from that far back. On a track like it was tonight, that was tough. My car was the best in the middle of the race but towards the end we just got a little free and I had to keep shutting the right front brake off because it would get tight on the restarts on the top. The track was tough early on and we just held back there until the track came back to us. I thought if I could get out front in the clean air it would be our race to lose but we never got there. Hey, it’s depressing but we’ve been having trouble with this motor and tonight it ran great so we’ll move on to the 76er and try to win 30K there.” 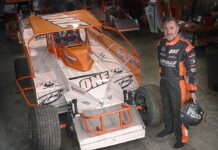 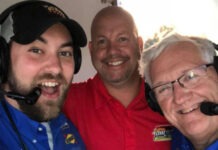 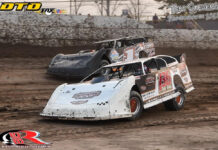