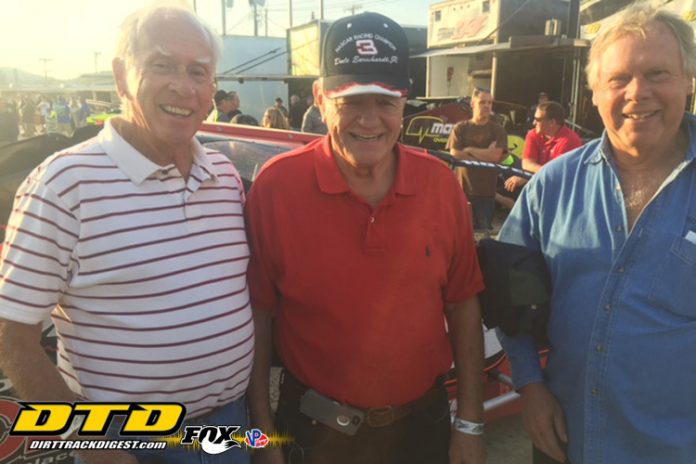 We started our racing on Thursday this past week at the 41st annual Mr. Dirt Track U.S.A. at Lebanon Valley. The DIRTcar event brought in many of the DIRTcar stars to take on the high banks. Before the evening started we got to talk with a few of the drivers that ran in previous Mr. Dirt Track events. Ernie Marshall and Barry Cone were the first two we ran into and we got this shot with Ed’s brother Rich. Veteran fans will remember both of these pioneers of the high banks.

Barry said “I don’t think people understand how much time and work goes into the sport.”

He said he had a measure he used that contributed to his exit from the sport at an early age. If you put 100% into something and only get 10% enjoyment out you should do something else. Barry did. He now enjoys the trains he has in his yard and the many people young and old that come to share that enjoyment. He has different groups of kids come several times a year to ride the trains and learn about them from Barry. We asked Ernie Marshall if he was taking out one of the cars and he said only if Ed rode with him. At the end of the night we saw Ernie after his son, Eddie came home with a second place finish and Ernie said he was tired.

“I drove every lap of the feature from the tower,” he said. During the night we also spoke with Win Slavin who had just celebrated his 80th birthday. Win won the Mr. Dirt Track event in 1980.

At the end of the night Brett Hearn added one more win to his career win list making the total now 902 and 102 Modified wins at Lebanon Valley. It was Brett’s 12th Mr. Dirt Track U.S.A. win. Our thoughts and prayers have all been going to the people in Texas this past week and on Thursday at Lebanon Valley Amsterdam Trailer Sales stepped up with $500 checks presented to Matt Sheppard and Kenny Tremont to be give to the Hurricane Harvey victims storm fund.

Friday night at the Great Race Place we were visited by the Patriot Guard Riders of N. Y. as part of Military Night at the track. All military were admitted free with proper ID. There was also a special ceremony with the No. 771 Street Stock of Jimmy Duncan. Duncan has the names of fallen soldiers displayed on his hood and he was brought to the front stretch of the speedway with the Patriot Guard Riders and the Gold Star Mothers of the fallen soldiers. Jimmy’s daughter Ally played the bagpipes and sang the National Anthem after a prayer by Pastor Ed. The Modified point battle at Albany-Saratoga came down to the final night with two drivers in contention separated by a mere 15 points, with Peter Britten leading. At the local level we seldom see an international battle for the points. Peter Britten from Australia went up against Keith Flach from near by Ravena, N. Y. Peter started in the 13th position and drove to the front and Keith finished just out of the top ten. Peter Britten’s record at the Great Race Place now shows five wins, 35 top fives and now one track championship.

Saturday at Lebanon Valley the Modified feature win went to someone we spoke with a few weeks ago. 74 years old Denny Soltis of Torrington, Conn. can now say, still winning. On Saturday Denny led every lap of the 30-lap feature and recorded his 15th win at The Valley. His first win came on July 12, 1975. Saturday’s win put him tied with Donnie Corellis, Chris Moore and Win Slavin for 20th place on the all time win list. The Labor Day holiday turned into a father and son road trip to Devil’s Bowl Speedway and the dirt track event that was rescheduled from Sunday due to rain. Once you are out of your car you can see nothing but the beauty of the Vermont countryside. One of the first things we noticed was how the facility is maintained. Mike Bruno along with family and staff have reason to be proud of all they have done.

It was the final night of points and the NASCAR champion on dirt was declared.
Going into the night seven time track champion Kenny Tremont, Jr. had a narrow lead of five points over Tim LaDuc. Points were awarded for the heat races and after completion of the qualifying, Tremont was ahead by only four points. Tremont won the 100-lap feature and LaDuc finished second giving the title to Tremont by six points. This was Tremont’s first ever NASCAR title.

There was a field of 80 racer on hand to compete and the fans came out for the holiday to cheer them on. Two young fans not unhappy with the result of the rain were Bayle and Cabrin who found entertainment in a large puddle in front of the grandstand. Their mom, Nadine Coates is a Mini Sprint racer at Devil’s Bowl in the No. 40. Nadine is in her second season of racing at the track and she is already looking forward to racing on the big track next season when it will be dirt.

Nadine said, “I am an adrenaline junkie.” She and her family are at The Bowl weekly and at home the kids are in the garage helping her with her racer. She has been around racing over 20 years and after losing her Dad in 2004 she decided to continue the family tradition of racing. Nadine is from Newport, N. H. and her dad, Dennis Coates raced at Thompson Speedway in Conn. Nadine is an engine machinist at R&L Engines, giving her the expertise to work on her own engines. On Monday she was leading the feature when the car developed a push from a competitor and Nadine ended upside down in turn two. Needless to say she was not happy with the incident.

As we close we send prayers to the people in Florida who are now facing the chance of Hurricane Irma hitting somewhere in the state this weekend. Until next week please send all news and/or comments to biittig@yahoo.com