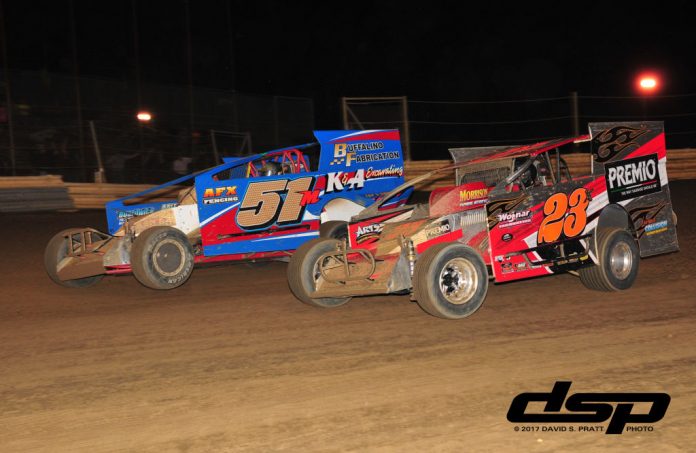 NEW EGYPT, NJ – Dominick Buffalino rolled into New Egypt Speedway on Saturday night and fabricated himself a huge $7500 payday in the Gres Paving Legends of The Fall 75 lap big-block vs small-block Modified event. Buffalino passed Rick Laubauch on lap 16 and though he endured what seemed like countless caution flags and a relentless attack for the lead from the 2017 New Egypt Modified champion Billy Pauch Jr., he held on for the massive payday.

24 modifieds made the feature event with a combination of open and ported small blocks and some big-block modifieds mixed in. Also, some had sail panels and others didn’t. 10 caution flags including one for a fuel stop plagued the 75-lap feature event.

Buffalino rolled into New Egypt on Tuesday night and picked up a seventh place finish. He was on hand to do some r & d work on his Pat Michaels owned entry. It was just the recipe that Buffalino needed to come in and pick up his biggest win of the season. Earlier this year, Buffalino also picked up a win at New Egypt in The Garden State Gun Fight.

With some of the competitors on alchohol, a pit stop was held on lap 39. The race officials had set a mark of 70 total laps of green and cautions to determin the pit stop mark. It was originally scheduled for lap 40 but Rocco Infante ran out of fuel on lap 38 and hung on to bring out the caution on lap 39 which allowed him to stay on the lead lap causing the field to be frozen for the fuel stop.

The drivers were not allowed to change tires, or make any mechanical adjustments to the cars except tear offs, hydration and fuel without giving up their current running spot.

Rick Laubach decided to gamble and went pit side and put new rubber on the Doug Flurer owned small-block. Laubach finished 6th in the feature.

Laubach will be going to Oswego as part of Super Dirt Week with a new car and a new number. Full details to be relased at a later date at the request of the team. Look for Laubach to wage a full assault on Eastern States for the 200. Additionally, Laubach may change his Friday night home for 2018. A decscion has yet to be made but is under consideration.

Young speed merchant Brandon Grasso is logging some miles this week. On Monday the teenager raced on the dirt in an ARCA series car for famed car owner Ken Schrader. He finished fifth in the General Tire Grabber 100 at the DuQuoin Illinois mile. He would finish fourth in the 75-lap affair at New Egypt.

While running in the top three, New Egypt regular Ryan Godown dropped out of the feature. He had raced his way to third after starting 14th in the feature. When reached by phone on Sunday as to what happened, Godown succintly put it “the car broke”.

Billy Pauch Jr. confirmed his plans to run the Eastern States 200. There are no plans to run Oswego in 2017. Billy will be in attendance at Bridgeport for The King of The Big Blocks on 9/23.

Finishing his second year in the 323 Fred Vahlshing owned entry, David VanHorn finished the 75-lap event in third. VanHorn, a former regular at Orange County Fair Speedway in Middletown, N.Y., is trying to work out a way to race in the upcoming Eastern States 200. There are no plans to race at Super Dirt Week in 2017. VanHorn is now working full-time for Vahlco Wheels. Vanhorn finished fourth in the points in the recently completed 2017 season at New Egypt.

If your a Modified, Sportsman racer or Sprint Car team looking for a good deal on wheels please reach out to David at Vahlco Wheels. Vahlco.com

Black Flag- Danny Bouc and Steve Davis were both tossed out of the feature after running into each other under yellow for over aggressive driving. This year Steve Davis made the move up from sportsman to the modified division.

New Egypt will be back in action again on October 21st with a 60-lap big-block vs small-block event. Stay up to date on the happenings at New Egypt Speedway by checking out their website newegyptspeedway.net, twitter @nesspeedway and on Facebook.com/newegyptspeedwayofficial