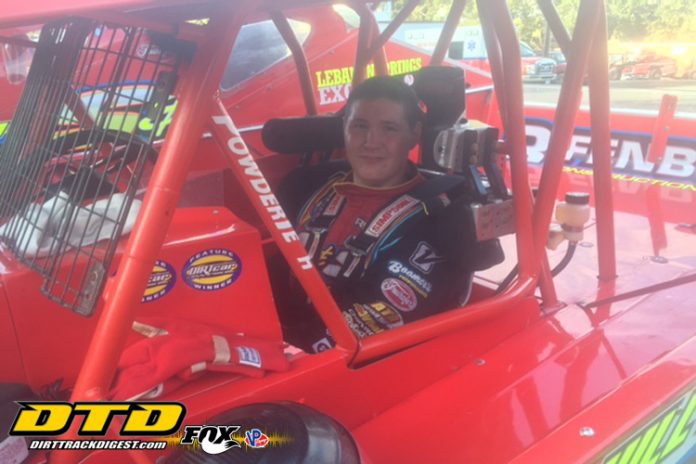 It’s hard to believe the season is coming to a close at our local tracks. Most tracks settled their point battles last weekend. This time of the yer we see tracks run different special events to close out the 2017 season.

Friday night the Great Race Place events brought out a great field of racers to run more laps for more money. 30 Pro Stocks ran a STR Series event of 50 laps and $2500 went to the winner, Nick Stone. The King of Dirt Sportsman Series event, the Northeast Crate Nationals consisted of 61 Sportsman competing in a 100-lap event with $2225 going to the winner, Rocky Warner. 24 competitors were on the track for the 40-lap Tom Clothier Trucking Suicide Awareness 358-Modified event. Winner was Ronnie Johnson taking home $2500.

When we first walked into the pit area we noticed two No. 115’s in the Tremont pit. When we spoke with Kenny he said he brought a second racer so his 15-year-old son, Montgomery could make his first ever appearance on the racing circuit. We watched as Kenny set aside his racer hat and put on his parent hat. Kenny said he had promised to let his son take out one of his racers before the season ended and all of a sudden the season was wrapping up and Montgomery was still waiting. His patiences paid off and on Friday night Montgomery Tremont took to the track at Albany-Saratoga for the first time. As Montgomery sat in the car taking in the last minute instructions from his dad he was listening intently.

Kenny said, “I told him to drop back to the rear, run a few laps and then pull into the infield.”


And that was exactly what he did. For all of those in attendance we may have seen the future of Tremont Racing.

During this past week a story broke about the end of a race team that was only together for less than two seasons. It seems that Jake Spraker and Ronnie Johnson decided it was time that they go their separate ways. Friday was the first night that Ronnie ran his familiar No. 2RJ and the Modified No. 1J of Jake Spraker was wheeled by champion Sportsman driver, Rocky Warner. Many people have been waiting to see Rocky make the move to the Modified division. Rocky averages about 30 wins per season, many of them being high paying events along with championships and series championships. Rocky won the KOD Sportsman event on Friday and then ran in the 358-Mod event, starting from the rear. Rocky came home with a ninth place finish, showing everyone he could make the move up and look impressive. The Modified feature went to Ronnie Johnson in his own racer giving him his second win of the season at the Malta oval. This season we have written about race track concessions and one many reason is, if you spend the time we do at a track you are interested in the food and the people that serve it. On Friday we snapped this photo of Rocko and his boss, Gabby in the coffee concession. Rocko is a young man who is so very polite and courteous when dealing with the people and Gabby says we are here to make our customers happy. The attitude these two have are a great example of how it should be done and we think when things are done right it deserves to be recognized. The title of Great Race Place has been brought to life by Lyle and Marcie and the entire staff. Well done! Friday night at Albany-Saratoga we ran into one of the pioneers of our sport. George Proctor, just celebrated his 80th birthday and we found him busy working on his son’s car in the pit area. Remarkable how those who forged the paths for today’s racers still want to be active in the sport they love.

With the season coming to a close, The Ridge and its new promoters Mike Parillo and Ray Sefrin who took over halfway through the season are putting the finishing touches to their first season. With 79 cars in the pits on a night when there was big shows at tracks up the road it would appear that The Ridge is building on their base and that fans and racers alike are willing to give the new guys on the block a chance. We snapped this shot of the fan grandstands showing that the fans are returning to support their effort.

Jim Becker was at The Ridge on Sunday shaking down the car he plans to run on Sunday, Sept. 24th at the track in the special Run Whatcha Brung show. In years past Jim and crew have put a sprint car wing on the front of the car and the roof, this year its much different.
Ivan Joslin made in three in a row at The Ridge on Sunday when he picked up his third win in the Pro Stock feature. Rocky Warner made the trip to Utica Rome on Sunday for the special Ultimate Sportsman Showdown paying $5000 to win. It paid off for him.

Until next week please say a prayer for the many family and friends we all have in Florida. Send all news and/or comments to biittig@yahoo.com