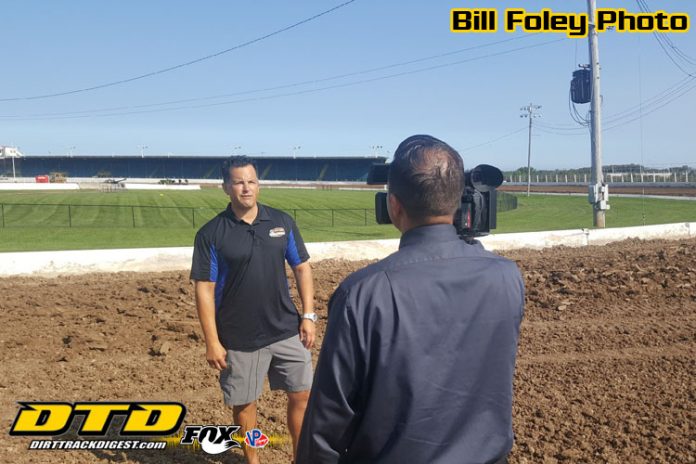 Jeff Hachmann, Director of DIRTcar Events, has taken up residence for his six-week stay in the Port City in expectations for preparing for year two for Super DIRT Week at the Steel Palace, Oswego Speedway.

Earlier this week Hachmann stood in turn three of the track as clay was being applied to the surface.

Asked if he is breathing easier as this is the second year he quickly answered, “I won’t breathe easier until October 8 when it is over.”

DIRTcar had a monumental task in shifting the Moody Mile extravaganza 38 mile north to Oswego.


Jeff said, “Last year there were challenges as the governor announced the fact that the show would be at Oswego just 80 days prior to the event. And that was the first of three pieces that we had to be concerned with.”

Continuing he said, “Secondly it was a scary challenge of how to put a 44 year event that had been in a facility of 150 acres into an area of 55 acres and not lose the mojo of the event.”

Then he concluded by saying, “I used to fill out a two page request form and send a $150 check to the State and here there was so much to do. There were so much offsite things that needed to be done at Oswego. There was security, health department, police, services and so much more. We did it.”

However, he was quick to note that “Mother Nature and the track” were initially problems in year one. The flooded campgrounds didn’t help much either.

Reflecting on the track which broke up he said, “People kept working on the track. People that use to work for Dirt, people from other facilities and just people who wanted to help rallied together along with our own people and worked on the track all weekend long.”

This year the team hoped that they caught a break.

Hachmann explained, “We got the track two weeks earlier than last year and I feel we have the best guys doing it for us with Larry Fink and Eric Kingsley along with John Wight and Gypsum. We have the pieces to the puzzle and just need to execute it.”

He noted, “Last year there were a lot of unknowns that are now knowns. As golfers would note we got a mulligan and this year we have no mulligans left.”

As the second week of September neared an end he said, “Thus far 95% of the clay is on the track. “

They were able to get right on the track as Hachmann explained, “I feel we have a three headed monster working on the track with Larry Fink who works for us and Eric Kingsley along with John Wight. Larry and Eric are the gurus of track preparation and all of the equipment and tools to support them is John Wight’s.”

Explaining the dedication of individuals to get this project the way they want it he noted, “John Wight was running the excavator on the first day and the next day was driving the trucks dumping the clay on the track.”

Continuing he said, “Larry Wight raced in Quebec on Saturday night and got back home at 3:30 in the morning. However, by 10 he had delivered a piece of equipment that was needed for track prep to the speedway.”

There is no doubt that there is a desire to have things right this year.

One of the first thing you notice in standing in turn three is that looking down the backstretch there is no jersey barrier jutting out near the back stretch pit entrance.

Jeff noted, “That barrier may go back in as it was meant for blending for cars coming off pit road, but there are individuals who don’t know if it is needed. We are still addressing that.”

Jeff talked about Tom Deery, the President of DIRTcar, already in Oswego working with fencing companies, involved in moving official trailers and helping to establish the final construction of ticket booths.

He noted “It’s important. In fact so important that the President of our organization is here working to make certain things are correct.”

Other Changes In Store

Gate Two, at the base of Albany Street, has been shifted to the Oswego Christian School parking lot and will provide additional services to the fans.

Gate 6, just off of City Line Road, will continue to be a main entrance.

Hachmann noted, “There is some shift in the midway. We will still have a midway in front of the Speedway on Albany Street (road will be shut to public October 2-9), but there will be a midway along the backstretch stands as Jimmy Phelps, Stewart Friesen and Brett Hearn will have their t-shirts there and probably more vendors will be added there. We also plan an additional concession stand in the area between tech and the media tent off the third turn.”

Well, the work continues toward the latest addition of Super DIRT Week.

Hachmann, however, still remembers something a driver said to him after last year’s event.

Jeff said, “Tim McCreadie said he understood the challenges we faced, but that there was more passing in Oswego than there was in the last 20 years at the Mile.”

So there is a foundation and expectations (and hopes) are that year two at Oswego will be a success.

Focus is on the 2017 Super DIRT Week at Oswego and genuine efforts are underway to make this event that is not only memorable to the fans and drivers, but the officials of the organization.