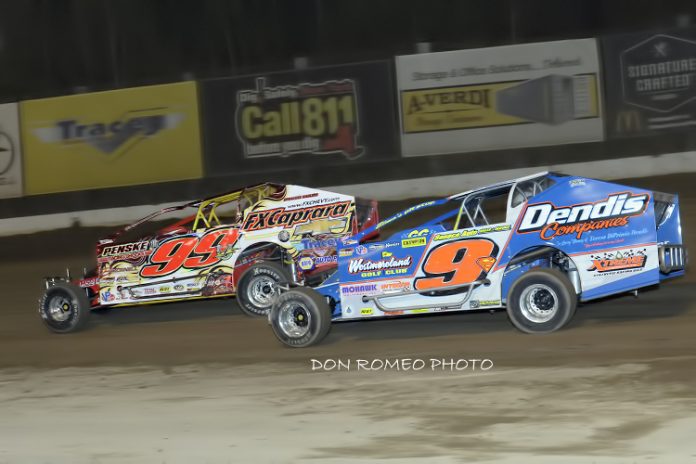 Just seven races remain on the 2017 Super DIRTcar Series (SDS) tour, and the points battle is getting even closer now with Matt Sheppard collecting his ninth win of the season on Friday night at the Brewerton Speedway for the “Duel at the Demon 100.”

Prior to Friday, Sheppard was only 76 points behind leader Billy Decker and three behind runner-up Larry Wight. The oddity in all of this is found in the “starts” column, with Decker and Wight now having 20 races completed and Sheppard with only 18. The next closest driver, before Brewerton, with less than the 19 prior events completed was Peter Britten in ninth-place, 364 points out of first-place. “Super Matt” has made up a lot of ground since serving his two-race suspension back in July and will surely be a contender for the points championship at the World of Outlaws World Finals in November.

Sheppard was third-quick in time trial group two and went on to finish third in his heat race behind Tim Fuller and Tim Sears Jr. That was good enough to put Sheppard in the redraw, where he pulled the number seven, placing him right alongside Tim Fuller.

For the first 50 laps, the Dendis Companies 9S stayed comfortably outside the top five spots. Then came lap 72, where Sheppard made a move on Pat Ward to break into the top three. Seven circuits later, Sheppard overtook Billy Decker for the second spot – a pass that turned some fans’ heads and ignited a bit of disagreement at the end of 100 laps…


Sheppard and Decker were racing very hard all race-long, making contact at various points on the track. Decker would finish fifth, but it was the contact made during the pass in turn three on lap 79 that had him heated after all was said and done.

Sheppard appeared to have seen an opening under Decker going into turn three and tried to take the space to make his pass, but made significant contact in the process. Decker’s car got catawampus exiting turns three and four while Sheppard continued on his charge for the lead.

“I kept getting a run off of [turn] two and couldn’t quite get in there, couldn’t quite get in there and then I got a really good run,” Sheppard said. “We hit together into [turn] three and I’m just really surprised he couldn’t see me underneath him. I’m pretty sure I was pretty much nerf-bar to nerf-bar with him, I can’t get any further in there than that and I don’t think I can go any lower on the track. I certainly wasn’t trying to make contact with him or anything, but I really thought he would have saw me there.”

The incident didn’t matter, however, as Sheppard made the move past Larry Wight for the lead on lap 89 and drove away in traffic to win his second-straight Duel at the Demon 100.

“Our car was glued to the bottom all night and it just seemed like it took 70 laps for the other cars to slide-up off the bottom,” Sheppard said. “Finally, when those guys couldn’t hold the bottom anymore and started sliding around and I could roll right around the bottom, that’s when we really started making our move.”

Second-place finisher Larry Wight swapped the lead back-and-forth with Pat Ward in the early going before jumping out to a good advantage in traffic. He would lead until Sheppard got underneath him in the late stages, which Wight said may have been because his car was better early than later on.

“I was able to just kind-of ride around for the first 60 laps and I think we were a little too good too early, and once that track started to blacken-up and slick-off, we just couldn’t quite stick the right-rear,” he said.

Coming into Friday, Wight was 73 points behind SDS point-leader Billy Decker. With seven races remaining, Wight knows that it’s all about posting good finishes in every race left if he expects to be there at the end.

“Hopefully we don’t have any bad luck. If Billy has some bad luck or Matt has some bad luck, we can capitalize on it like we did at Granby,” he said. “Really, it’s just going to be survival of the fittest and making sure we finish every race.

“This has been a really good year for me. We’ve had some misfortune but we’ve got a lot of wins this year,” Wight continued. “I’ve got a baby on the way, me and Brooke do, so to get a championship would be icing on the cake.”

Jimmy Phelps completed the podium in third with a solid run inside the top five all night. He seemed to maneuver through traffic well, using multiple grooves to make his moves and stay up front.

Tim Sears Jr. posted a solid fourth-place finish, staying inside the top 10 throughout the race. However, it was some good moves on the bottom of the track within the final 10 laps that moved him from a sixth-place spot to a fourth-place finish around Pat Ward and Billy Decker.

“We were getting faster at the end, just unfortunately ran out of laps. The track changed a lot in the last 25 laps, it was pretty quick up until like 80. Then it started to slow down and started to get some black streaks around it. We just stayed steady right around the bottom, kept it straight and drove off.”

The Super DIRTcar Series is back in action tonight, September 16, at the Mowhawk International Raceway in Akwesasne, New York.