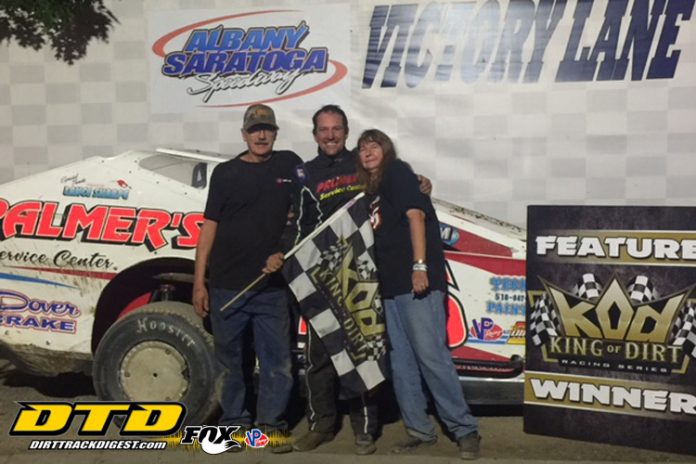 Friday evening we made our final trip this season to the Great Race Place the Albany-Saratoga Speedway.  The night featured the King of Dirt small-block Modified event along with a special Street Stock race paying an added purse plus lap money for the leader of each lap.  Also on the racing card were the track’s other divisions plus a visit from the Sling Shot division. Before the show got underway Mia Mangino (Marcy’s daughter) was on the starter stand doing an interview with last week’s feature winner, Ronnie Johnson.  Mia did a great job asking the questions fans were glad to hear answers for.  Ronnie spoke of starting his career at Albany-Saratoga and was glad to be back in victory lane.  He said it was the first race in his own car this season.  Mia did well with the interview.  In addition we want to congratulate her on recently becoming a licensed cosmetologist.

One driver we’ve been watching each week is second generation driver Neil Stratton.  Neil’s dad, Hector hung up his helmet at the end of last season so that he could dedicate his time to Neil’s racing efforts.  Neil said his season racing a small-block against some of the most winning drivers in the big block division at first gave him the sense that there was only one position he could finish in; he finished seventh five times this season.  This prompted us to look at his season at Malta and we found that he ran in 19 features and came home with 13 top tens.  At the end of the point season he was eighth in Modified points at the track.  This young driver placing in the top ten in points was a great showing when you see that at least 72 different drivers made an appearance at Albany-Saratoga this season.  Going into Friday’s event Neil was second in the King of Dirt Small Block points. When you bring a series  into a track you get a mix of drivers that make the show very interesting, drivers that are not there every week.  The King of Dirt did just that on Friday and the fans were treated to one great finale to the 2017 season.  The winner of the small-block Mod event only races Albany Saratoga at special events.  Watching the 40-lap feature we saw some great side-by-side racing without contact and we’re talking about side-by-side and passing showing great respect for each other and their equipment.  The winner at the end of the 40 laps was Bobby Varin who was in victory lane for the second time of his career at Albany-Saratoga.  His first win was the Super DIRTcar Series Big Show IV promoted by Brett Hearn.  Bobby was victorious in the Alton and Carole Palmer No. 76.  He also took the Palmer car to victory on Saturday at Fonda.  Bobby Varin now has 141 career wins at 10 different speedways from the fastest quarter mile, Glen Ridge to the former, New York State Fairgrounds oval.  At the end of most features the winner is of course happy and many times from second on back the celebrations are a bit less.  On Friday the second and third place finishers, Demetrios Drellos who finished second and Jeremy Wilder who was third had great words for their fellow racers and how the three of them had a great time racing each other without issue, the way it should be.  We commend the drivers for their professionalism.

Sunday was the final night of points at Glen Ridge and to add to the excitement it was double points.  Going into the night in Crate Modifieds Chris Curtis had a hefty 37 point lead over Harry Shaffer II and a 38 point lead over Alissa Cody and Brian Calabrese.  At the end of the night, Curtis took home the title.  Limited Sportsman drivers Mikey Jackson and Dave Richer were separated by four points with Kathy Bellen out of first by 15 points.  When Limited Sportsman finished racing Mikey Jackson was the track champion.  Pro Stock contenders Luke Horning and Ivan Joslin were separated by 16 points at the beginning of the night; Horning took the title.  Chris Andrews had a 14 point lead in the Cruiser division and went on to win the event and the championship.

Important change to the schedule at Glen Ridge.  There is NOT a Run Watcha Brung show at The Ridge this Sunday, Sept. 24th  Instead there will be racing for all regular division plus 358 Modifieds and an Enduro.