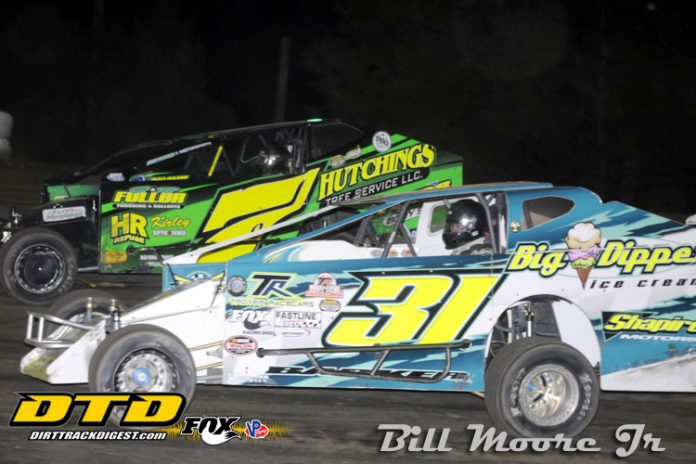 It has been over three weeks since I’ve submitted anything to DTD for you. Let me catch you up. Labor Day Weekend I spent every night the weather cooperated chasing the Lucas Oil Empire Super Sprints. That took me to Brewerton and Fulton before the rain washed Utica Rome’s hopes away of running ESS there. That Monday I was at Weedsport.

By now our readers already know by other reports that each and every show was great at each of the tracks I was able to attend.

Last Friday I was at Brewerton for the Super DIRTcar Modified and Sportsman race. That was also a great show all around.

Since I’m so late getting anything results related out to you, I want to run with a few observations I’ve made. The 602 Crate Sportsman division is the bread and butter of most tracks today. The car counts have been great everywhere I’ve been on a weekly basis. There’s some buzz about “cheater motors” separating some drivers from others, but every time two of the winningest drivers are teched they come out smelling like roses.


This is a class so equally matched that setup and driver are all that lands someone in or separates someone from victory lane. I’d say it’s arguably the most competitive class in the north east right now. It reminds me of our quarter midget days in a class called Senior Honda. The motors were all so equal that one miscue by a driver, or the slightest oversight in set up was the difference between hero and zero.

Two driver’s teams have been making strides all year to find the missing link between “up front” and “out front”. Nick Krause has been right there since after the first month, but waited until the final point races at Brewerton and Fulton to win back to back features. Corey Barker was a late season shoe, with two in a row at Fulton late in the year. His most recent win came in a spectacular way Friday at Brewerton as he earned his first ever DIRTcar Sportsman Tour win.

Another thing I’ve noticed is the level of aggression I’ve seen as point chases were winding down. This resulted in some of the most exciting finishes and races I’ve seen all year. However, there is a fine line between hard racing and endangering a competitor. I’ve witnessed highly skilled drivers crossing that line a few times more than I care to this year, only to play it off with the media, or in victory lane had they won.

The seeds you sow will surely grow. That’s a biblical promise found in Paul’s letter to the Galatians in Chapter 6 Verse 7. My idea of a great driver is one who races as hard as they can with respect for other driver’s equipment, and celebrates victories as if each one was their first. Greatness isn’t a measure of someone’s accomplishments. It’s a passionate pursuit of character that results in success with integrity.

As we approach some of the highest paying races the North East has to offer, I encourage every competitor in every division to consider the wisdom of Solomon, who’s proverbial advice says

“He who walks with integrity walks securely, But he who perverts his ways will become known. Proverbs 10:9 NKJV”

In this perspective, nothing you do or say is hidden from the only eyes and ears that should matter, God’s. He spoke this very thing through the Prophet Jeremiah

Don’t misunderstand what I’m driving at here. The sport has many great drivers, and those who aspire to be like them or exceed their accomplishments. It’s far better to build your character as you build your resume so you have the integrity to uphold the attention that comes with the recognition of your accomplishments. Peter exhorted us to

“Keep your conscience clear. Then if people speak against you, they will be ashamed when they see what a good life you live because you belong to Christ. Remember, it is better to suffer for doing good, if that is what God wants, than to suffer for doing wrong!
1 Peter 3:16b-17 NLT”

I know a few drivers like that. I’d like to see more and more of them as the seasons roll on. We have a great sport to enjoy. Let’s work to make it greater.

On another note, our deepest prayers and most heartfelt condolences go out to the family, crew, friends, and fans of Ted Christopher. He was a true wheelman on the asphalt, and we’ll miss his colorful presence among us.

Until next time, if you need us for anything email me at flchaplain@windstream.net, or message us at our Facebook page at Finish Line Chaplain.