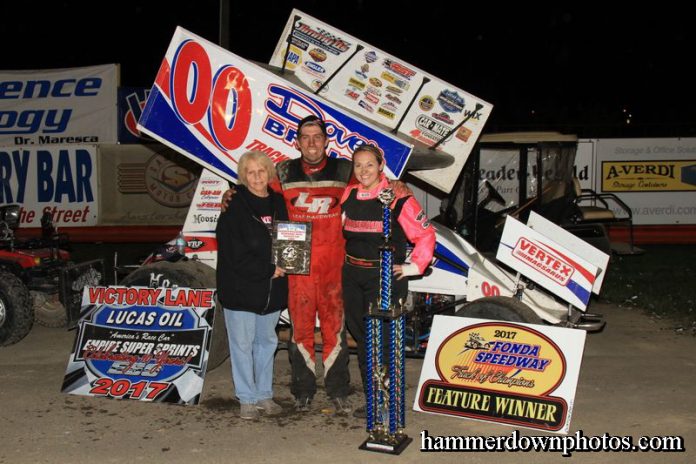 Posting good finishes in every race is what all drivers aim to do, week-in and week-out. For some, it’s hard enough to do that against the regulars at their home track, let alone a full field of competitors chasing a national tour points title. But to put two different cars on the podium in two different tour races on the same night is something dirt racing fans rarely get to see. In the early Sunday morning hours at the Fonda Speedway, the father-son combo of Bobby and Danny Varin did exactly that, sweeping the weekend’s main events in both the modified and sprint car divisions.

Bobby won the King of Dirt 358 modified race on Friday night and went on to win the 100-lap Super DIRTcar Series (SDS) big-block modified event, which started around 11:15 p.m. on Saturday and went well into the first hour of Sunday morning, finally concluding around 12:30. After a wild race that saw many right-rear Hoosier tires shred to pieces under green, Bobby was able to scoop-up the lead from a slowing Tim Fuller on the last lap when he blew his right-rear in turn one. Bobby led the field around to the checkers, while Danny moved up to the second spot when the whole field drove by Fuller.

That made three modified victories in a row at Fonda for Bobby, as he also won the big-block feature on the final points night last Saturday, Sept. 16. Danny also finished runner-up in that race, and would wrap up his year at Fonda with a win in the sprint car challenge race at around 1:30 a.m. Sunday morning.

The 25-lap feature event, which was made up of 27 cars from the Empire Super Sprints (ESS), the Partiot Sprint Tour (PST) and the United Racing Club (URC), was led by a Varin every lap. Bobby started on the pole and led the race until lap six, when he appeared to slow coming out of turn four and down the front stretch, just enough for Danny to drive around him to take the lead. Coming from the fifth starting spot, Danny was able to hold off Friesen through a few restarts and major lap traffic in the closing circuits for his fifth win in a sprint car this year.


“We knew what we were getting into come the feature. We loosened it up and just tried to wing- it and go for the win,” Danny said in victory lane.

The move to get by his father was a little gutsy, but Danny knew he had no time to waste in getting to the lead with Friesen right behind him.

“For a minute there, I think he just checked up. He knew not to get out of the rubber, I mean if you were out of the rubber you were done,” Danny said. “He was just trying to maintain and stay behind the lap cars, and I just threw it in there and tried not to wreck both cars.”

What a day behind the wheel of a racecar it was for Stewart Friesen. The Varin duo may have pulled double-duty on the dirt, but Friesen somehow managed to fulfill all three of his racing duties on Saturday. He posted a fifth-place finish with the NASCAR Camping World Truck Series at the New Hampshire Motor Speedway in the daytime, and made the trip back to Fonda by the evening to jump in his modified, only to have tire issues near the end of the race that set him back to a 24th place finish. His luck would turn out to be far better in the sprint car, however, as he ran top-five the whole race and ended up second.

“That last restart, I just about rolled-up next to [Danny] in [turns] one and two, but then I got in the rubber. It was weird, rubbered in some spots and slick in others,” Friesen said. “He got us there on the original start, got some good track position and that was it.”

As one would expect, Bobby Varin was quite the happy camper celebrating in victory lane with son Danny at the conclusion of the race. A shower of water thrown on his son’s head, a big smile on his face and a third-place finish with the sprint car was the perfect end to the Kramer Williamson Memorial challenge race.

Bobby has a lot of faith in his son, and Danny sure has been delivering with the sprint car this season. Five wins and a heap of other successes with the Dover Brake team this year, dad is very confident of an even brighter future for Danny.

“The kid has worked hard and he deserves everything he gets with this sprint car outfit,” Bobby said. “Good things are happening for him and hopefully, one of these days, he’ll land a really big ride and maybe move on with his career.”