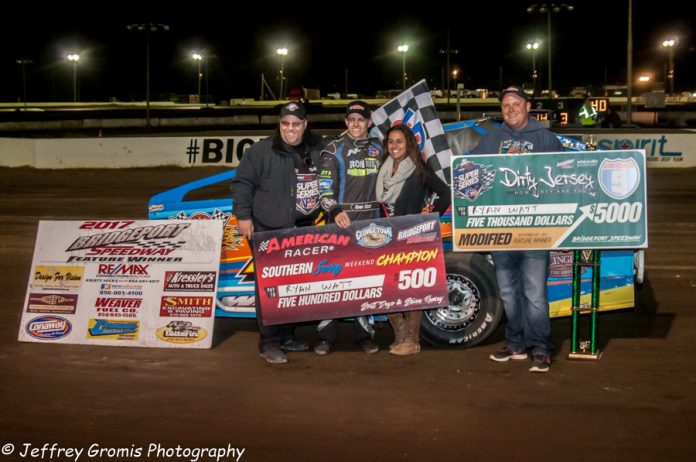 What else can you say about Ryan Watt and his winning ways this season at Bridgeport Speedway? Watt has been dominate all season long at the South Jersey oval and last night proved to be no different as Watt led wire-to-wire to claim the $5,000 first place prize in winning the Brett Deyo promoted Short Track Super Series South Region race at the speedway. This came a week after winning last week’s King of the Big Block race which paid a cool $10,000.

Watt started out the night winning his heat race by a large margin. When Watt’s son Logan picked the pole starting position for the feature you could hear a collective sigh come over the crowd who knew that without a problem it was Watt’s race to lose at that point.

Most fans think when a driver gets to start the race on the pole and it can be but if you ask most drivers they would prefer not to start in the first position.

“Well, two of the best things happened with that deal tonight. Starting on the pole is bad because you don’t know what’s going on behind you and where guys are running but you have clear track in front of you, so that’s a good thing. The other thing good that happened is that (Craig) Von Dohren picked twelfth. Craig is pretty close to what we have right now in times and stuff like that and the fact that he had to come through the field like that helped because we didn’t have to use up our car battling with him.”

When the green flag dropped Watt did what everyone thought was going to happen when he immediately jumped out to the lead. Watt went on to lead all 40 laps and honestly was never challenged. Each and every restart Watt just motored away from the field. Watt had his Ron Roberts Racing Bicknell Chassis/Enders powered car on a rail.  It was his ninth win of the season at Bridgeport and twelfth overall on the season.

I talked to Watt afterwards to get his thoughts on the season he is having in 2017.

“This car amazing, that’s for sure. Right out of the box it has been and I hope it keeps going. Last year we were kind of getting closer and closer and we had some good runs toward the end of the year and picked up some wins with this coil car. We put this Bicknell car together at the beginning of this season and put the Enders motor in it’s just been really strong. We had our Morrison motor in before this and we had three wins and three seconds with that motor. I don’t really know, everything is just working together and I’m comfortable with the car. I’ve been driving it for two year like this. I got a good feel for it. Other guys have tried it and they’ve gave up on it and some of the other guys didn’t want to try it. It’s not for every track and it’s not for every driver but it works for me.”

ANOTHER Second for Von Dohren at Bridgeport

You would think that finishing second in three high paying races in a row would be a good thing, but not if your Craig Von Dohren. You see, Von Dohren races for a living and even though finishing second three weeks in a row pays good. It definitely doesn’t pay as good as winning.

Two weeks ago at the Grandview Speedway in the Freedom 76 Von Dohren finished second to Jeff Strunk losing out on a $30,000 payday. Last week at Bridgeport Speedway in the $10,000 to win King of the Big Block race Von Dohren had the lead only to lose it late in the race to Watt to once again settle for second. Last night Von Dohren was looking to reverse that trend and take home the $5,000 first place check. The night started out great for Von Dohren as he easily won his heat race putting him into the redraw for the 40 lap feature. However, Von Dohren’s night took a turn for the worse when his crew member drew the worst possible starting spot he could get in twelfth.

Starting in the twelfth spot, Von Dohren had his work cut out for him, especially knowing how fast Watt has been at Bridgeport this season and where he was starting. Von Dohren was patient early on letting the field settle in before starting his charge to the front. Just past the halfway mark Von Dohren started to kick it in gear and was consistently running the fastest laps of the race at that point. The only problem for Von Dohren was the lack of cautions during the middle portion of the race. Without the yellows Von Dohren was forced to have to run down every car in front one at a time. Von Dohren finally got the break he needed when on lap 35 the yellow was displayed for a slowing Richie Pratt. Running in the fourth spot at the time, this was the break Von Dohren was looking for. When the green flag came back out with five to go Von Dohren immediately went to work on third place Ryan Godown and second place running Sammy Martz. Von Dohren was able to move past both drivers and into the second spot but by the time he was able to do that Watt was long gone. Von Dohren gave it his best shot but once again had to settle for a disappointing second place finish.

“It was frustrating but we’ll take it I guess. It was tough racing out there tonight.  It was pretty dirty out there tonight and hard to see but it was the same for everyone. It’s a tough deal when you don’t draw well, starting spot is so crucial here but it is what it is you know.”

Von Dohren and his Dick Biever owned team have just started working with their new coil over suspension Bicknell chassis and have been fast, but just seem to be tick behind in speed compared to Watt who is running basically the same chassis.

Von Dohren talked about his new coil over car and how it is to drive.

“It’s a whole new deal for us.  We are trying some things and it’s getting better. This car definitely reacts different and it‘s a handful to drive for sure. Ryan (Watt) been using this set-up for almost two years there and is pretty good with his.  We’re pretty close for only being a month into this deal. We keep making gains on it and we just have to keep racing with it. It’s a tough deal only racing it here a couple of times. If we were here every Saturday night I think we could get a better handle on it. It’s a good piece; the motor we have from Morrison is good so we’ll just keep working on it to get it better.”

Martz Puts Tough Season Behind Him with Solid Third

It has not been the best of seasons this year at Bridgeport for veteran New Jersey driver Sammy Martz. Always a crowd favorite Martz has seemed to have had nothing but troubles throughout the 2017 season. With many mechanical breakdowns and being involved in accidents not of his doing. Martz and his family owned team really needed a good race to get some confidence back before heading north in a few weeks to compete in the Eastern States 200.

Martz was fast all race long and was never out of the top five all night as his car seemed to get stronger as the laps clicked off.

“We got stronger as the race went on.  We got into the right rear a little heavy there at the end but we’re happy with a third. We are gonna head to Middletown in a few weeks so this is good for moral before we head up there.”

It was a happy Martz standing beside his car afterwards behind the grandstand as he greeted his fans and signed autographs who explained his season of frustration and how it felt to get a good finish.

“We’ve had a lot of breakdowns this year; it’s been all kinds of different stuff breaking. Nothing really motor wise, it’s just been different parts on the car that have been breaking.  It’s been a lot of weird stuff breaking that we’ve had no control over and finally tonight it frigging held all together and we showed what we can do when we’re out there on the track. It’s tough to do anything out there on the track when you are not on the track.”

It was really great to see Sammy run up towards the front again. The Martz’s are the definition of a family team with wife Christine, daughter Angelica and son Sammy doing everything they can to help behind the scenes to make sure the car gets to the track each and every week along with the help of a very dedicated crew.

There were 32 Modifeds on hand for round seven of the eight races that make-up the Short Track Super Series South region. Ryan Watt, Craig Von Dohren and Anthony Perrgo won the three heat races with Billy Pauch Sr taking the consi…

Huge heartbreaker for Jordan Watson who had a very fast new coil over Bicknell chassis and was running second to Ryan Watt when the motor broke, ending his race…

Ryan Godown, who usually has some of his crew on hand to help prepare the Petruska & Sons / Atlas Paving #66 for the night’s events decided to leave them home yesterday to finishing preparing the teams cars for their busy assault on Super DIRT Week. Godown’s plans for SDW are to compete in all of the week’s 358 races with the Searock Fabrication #26 and also in the big block portion of the week in the Dieter Schmidt owned #5…

Jimmy Horton and his crew had a busy Saturday they certainly didn’t plan. Horton’s plan was to run his Halmar International #43 on Friday night at Georgetown and then on Saturday do a quick look over and load it back up for Bridgeport and continue working on the new Bicknell chassis he is preparing for SDW. Well Horton’s plans changed when on Friday night the motor went bad forcing the team to have to change motors on Saturday. Arriving just before warm-ups started, Horton had a solid sixth place finish in the feature…

With Stewart Friesen missing last night’s race out racing the Halmar Int’l #52 in the Camping World Truck series race in Las Vegas, the point championship is now Watt’s to lose…

Watt has a commanding 52 point lead over Duane Howard in the chase for the Bob Hilbert sponsored STSS South Region title after last night’s race. Jimmy Horton, Ryan Godown and David VanHorn round out the top five…

Watt was also the winner of the two race series championship consisting of Friday night at Georgetown and Saturday at Bridgeport over Anthony Perrego. Watt and his team collected a $500 bonus for their efforts…