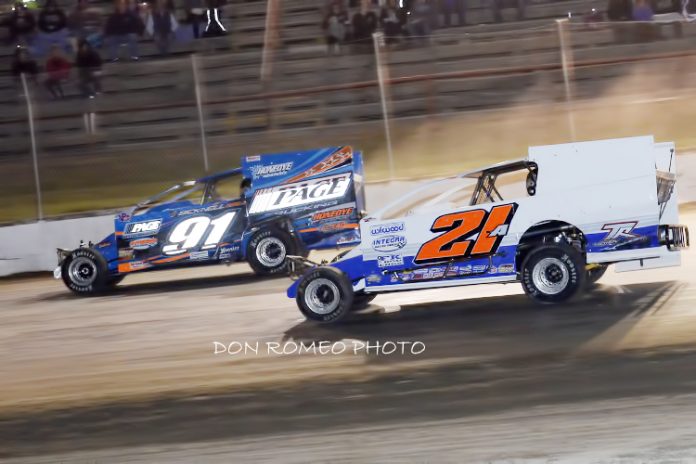 The phrases “you can’t win ‘em all” and “we’ll get ‘em next time” typically follow an event of bad luck or excessive frustration. These seemed to be the takeaways for some drivers on Sunday night, as the heavy, bothersome lapped-traffic, inconsistent restarts and a near-asphalt racing surface proved to be the main culprits in what Peter Britten said was a “frustrating, just really frustrating” Outlaw 200 at the Fulton Speedway.

68 Modifieds (some small-blocks, most big-blocks) packed the pit area on a sunny Sunday afternoon and awaited the Sportsman consolation events to conclude. Everyone knows how slick Fulton’s racing surface can get at times, but the Outlaw 200 always gives new meaning to the word “slick.” The next closest comparable substance to the entrance of turn one after the heat races would be ice… Not the ideal track condition for Britten, but he made the most of it.

“Batman” lined-up eighth out of eleven cars in heat race number four and posted a third-place finish, good enough to put him in the 200-lap A-main event with a 16th starting spot. Right from the start, Britten appeared to have quite the competitive ride underneath him, as he climbed into the top five just before the quarter-way mark.

The Queensland, Australia, native made up a lot of ground on eventual winner Billy Decker within the next 25 laps, taking second around the lap 65 mark. However, his progress stalled a bit after some contact with a slower lapped-car coming out of turn four. Britten saved his car from spinning all the way around, but he lost a considerable amount of ground.

“I about got turned around by a couple of them. They’re racing for position, but it’d be nice if some guys could hold their line a little bit better,” he commented. “You’ve almost got to keep an eye out for what guys are doing and anticipate that they’re going to screw-up. But that’s all part of it, everyone’s got to deal with it. That’s what makes the race kind-of interesting.”

He was able to catch back up before the halfway-mark, though, as Decker was having a tough time getting through wave-after-wave of traffic. But this momentum, too, was again halted, as Britten and Decker came together on a lap 98 restart that ended up cutting Britten’s right-front tire down. This put him back to ninth at the halfway caution flag.

“We were able to come back, luckily we slipped back to ninth, which wasn’t too far,” he said. “We were able to get back to second there at one point, it’s just the rubber-racing isn’t exactly the easiest thing either.

“We felt we were pretty good, just a minor change. We definitely weren’t anticipating it rubbering, so if we had known that was coming we probably would’ve done something else,” Britten said about his changes to the car during the break. “Once the rubber kicks-in, there’s nothing you can do. That’s it.”

Britten was able to rebound again after the 15-minute break in the pits, climbing all the way back up to second with around 40 laps-to-go. However, misfortune would strike the 21A again as he punched the throttle for a restart on lap 167, only to see the car push way up the track and lose four spots in the process.

“It was one of those moments where I probably could’ve just tried to tuck-in and smash the guy underneath me and get back to the bottom like everybody else was doing,” Britten said. “I tried to go for the win and unfortunately just pushed. I don’t know whether the right-front just got in the dusty stuff and the left-rear was in the rubber and just pushed up the track, it just wouldn’t come back.”

Britten slipped back to sixth after the yellow came out on that same lap and, this time, was unable to regain the spots he lost. He lost one more spot in the closing laps to Pat Ward, leaving him with a seventh-place finish.

“When you’ve got a car to win and you can’t seem to quite get to the front, it’s always aggravating,” Britten remarked. “Seventh isn’t a bad place to end up, I just couldn’t seem to get any luck to go my way.”

It may not have been his best night of racing, but Britten knows he’s still got a good opportunity about 20-minutes down the road in Oswego at “The Clay Palace” for Super DIRT Week XLVI next Sunday, Oct. 8. Last year, he got caught-up in an incident that retired his car to the pits, and walked away with a 20th-place finish. He is hoping to have a much better fairing in 2017 in the Billy Whittaker Cars 200.

“We’ve got a lot of momentum, we’ve got a really fast car and we’ve been running really well, just not getting the results,” he said. “Maybe that’ll be the time where it turns around.

“I think the whole event is going to be good up there once they figure out the track surface, hopefully it’s a little better this year,” Britten continued. “The only downer to me [last year] was the track surface – it was horrible. Everybody knows it, so there’s no point in harping on about it.”

After Super DIRT Week, Britten plans to finish-up the 2017 racing season with the Super DIRTcar Series at the Brockville Ontario Speedway on Oct. 13 and The Dirt Track at Charlotte for the World Finals on Nov. 2-4.