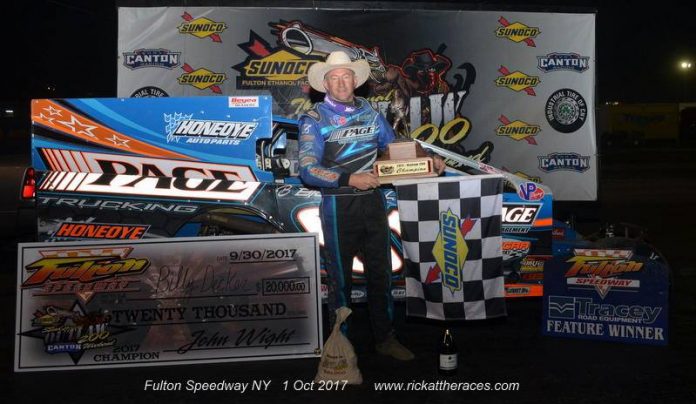 Billy Decker continued to add accomplishments to his historic Modified career on Sunday evening by dominating the Outlaw 200 for the $20,000 paycheck at the Fulton Speedway. Although Decker is a multi-time winner of the event, he gave car owner Mike Payne his first ever triumph in the event formally known as the Victoria 200.

“I’m already thinking about what I’m doing when I get home for this week,” stated a still shocked Payne afterwards. “It just hasn’t sunk in, probably won’t sink in. Honestly I couldn’t tell you when it will sink in. It means a lot that my family is here. My wife has supported me, my kids, my dad is here. It means an awful lot. (Dan) Titus is off on a work program and couldn’t be here, but he wanted to make sure he is here for next week for DIRT Week. I already talked to him. The Page Trucking guys will be super jacked tomorrow. It’s going to be a good deal, but I’m glad it’s over. I couldn’t handle much more.”

It was Decker’s second high dollar win of the season at the facility after he also captured the Super DIRTcar Series event back in April. He was pleased to get the win for Payne while also seemingly getting the team back on track as they head into the most important part of the season.

“We are really starting to gel this year,” mentioned Decker. “Last year was a struggle and I really don’t know why. I felt like we were better than that last year. We gave it another shot this year. We lost some speed through the summer, but hopefully this is a sign that we are gaining some of it back toward the tail end of the year. It’s important. The guys work really hard and it’s nice to give dividends now and again. I feel fortunate to be able to do that for them and happy at the same time.”


Decker’s veteran composure was necessary throughout much of the 200 lap event as he started the race from the 13th position after missing out on the redraw in his heat race. He navigated around the slick track to move into the top five during the first 25 laps. By lap 36 he was into second before finally take the lead from Tim Sears Jr., just after lap 50.

Upon taking the advantage Decker had no time to rest as a hard charging Peter Britten began working him over. Britten even managed to take the lead away from Decker before a lapped car got into him causing him to nearly spin out. He regrouped and came after Decker again.  The pair came together on a late restart which caused Britten to get a flat tire.  He faded before the halfway break.

He regrouped after the stop and once again worked forward to challenge Decker. Eventually a late restart watched him fall back through the field, but he gave Decker a run for his money.

“I saw him a couple times, but I don’t know what happened to him,” commented Decker of the battle with Britten. “I had to move on them restarts and the one time we got into each other. I guess he got a flat right front. The guy was racing me clean. They said in the pits the guy was really good. I had to hold my line there and do my thing. I knew he was really good. I think he had a couple of unfortunate restarts there, but he had a good race car.”

After the mid-point pause, Decker held his lead while also pulling away. A few some major concerns arose for the Unadilla, N.Y., driver as the track began to lock down on the bottom. This made things more challenging as he also had to figure out a way to negotiate through traffic as they also worked the same lane.

“A few guys race you harder than you would like,” cited Decker. “One thing I would like to see change is the lap flag. They don’t use it in the 200. It’s one thing when the track is real wide and you can go where you have to go, but when it gets narrow like this I think it needs to be used because people need to get out of the way.”

He especially found it more challenging later in the race.

“We run up onto lapped traffic so quick,” he said. “At that stage it was my race to lose so I can’t get out of the rubber. The only thing you fear is that you’ll get hung up quite slow behind the lapped car and somebody rolls you. Then they are able to pitch the guy off so they can pass. It’s not fun. You are trying to protect all the grooves and you can’t get out of line.”

Although he was able to keep his car glued to the quick lane in traffic, Decker and his car owner Payne were happy to see some late yellows clear the track to open the way for Decker. Restarts were tough, but not as tough as battling traffic.

“I was very grateful the cautions came out,” stated Payne. “I knew in clear track we were very good. I knew he was conserving. He was just making sure we had tire left until the end. He is just really good. When we give him a good race car it makes his talent shine. Fortunately it all came together today.”

With $20,000 in their pocket, attention now quickly turns to Super DIRT Week and their battle for the 2017 Super DIRTcar Series title. Payne knows that they have to continue to work hard to earn strong finishes. His thoughts are already looking to what’s ahead and how they are going to hold off a hard charging Matt Sheppard in the final month of the season. It’s Payne’s first opportunity to score the coveted title as this is the best position he’s ever been in so late in the season.

“The Mr. DIRT championship (Super DIRTcar Series), that has been the goal the whole time,” mentioned Payne. “I’ve never been in a position like this so late in the year. We are going to give it our all. We got someone that is real, real hungry chasing us down. Hopefully we can stay focused and do what we have to do. I think we learned some stuff today. We’ve been trying some different stuff, trying to figure out a little bit better balance. Hopefully today we found something.”

For Decker the win was a nice boost, one he hopes to ride through the conclusion of Super DIRT Week.

“We are going back racing Wednesday,” commented Decker. “It’s nice. The nice thing about this is it gets everybody’s elbows up and rejuvenated. Hopefully we can carry this into Super DIRT Week and continue to have fun.”

If Super DIRT Week goes as well as Sunday night, there isn’t any reason to believe that both Payne and Decker won’t be able to “continue to have fun.”