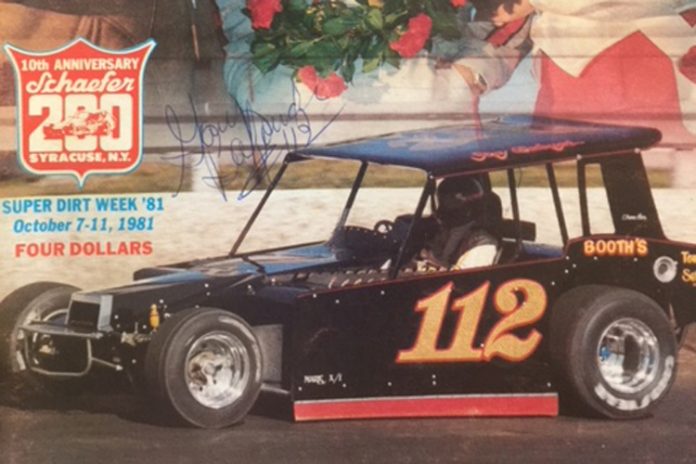 As we sit down for this effort we realized that Wednesday we will be in Oswego at the Oswego Speedway for the second time World Racing Group will run Super DIRT Week events at an asphalt speedway resurfaced with dirt specifically for this occasion. Last year was the first and considering all that needed to be done and that it was the inaugural attempt things went fairly well. Maybe not everyone feels this way about last year but we’ve seen many changes since our first Super DIRT Week and we hope to see a few more no matter where WRG decides to take the traditional Northeast racing event.

Last week we looked into our Super DIRT Week history collection and gave you a few tidbits on the first two events. This week we continue with the 1974 running of what by then had become a fall tradition at the New York State Fairgrounds oval in Syracuse. The event was scheduled for September 27, 28 and 29 with the first two days being registration and time trials and a non-qualifier race. The Schaefer International 100 was run on Sunday. The fastest car in time trials was driven by New Jersey’s Billy Osmun, in the Statewide No. 3. For the first time in the running of the event rain came during the Schaefer 100 and Promoter, Glenn Donnelly called for the caution flag to fly on lap 86. The cars ran under caution until lap 95 when the event was checkered and Osmun was the winner. The 1975 Schaefer International 100 was to be September 26, 27 and 28 and with 200 drivers in the pits on Friday the rain moved in and everything was moved to Saturday. Grabbing the pole was famous car builder Dick “Toby” Tobias from Pennsylvania. His time was 35.872 around the Moody Mile. At the end of the event Tobias would be the second driver to win the event from the pole. Donnelly estimated the crowd at 27,000.

In 1976 another day was added to the event beginning on September 30th and continuing to October 1,2,&3. The Modifieds were joined by U.S.A.C. Champ Cars that ran a 100-mile championship race on Saturday. The Schaefer International 100 winner started in the fourth position and at the completion of the 100-laps another Floridian stood in front of the huge crowd. The U.S.A.C. event was won by Duane “Pancho” Carter of Indianapolis, IN.
It wasn’t until 1979 and the running of the then Schaefer 200km (125 miles) event that New Yorkers could lay claim to an event run at their state fairgrounds. At the end of 125 miles the popular driver from Duanesburg, NY, Jack Johnson would reign supreme at Super DIRT Week. Johnson led from lap 101 to 125 for the richest payday of his career. Johnson drove a car owned by the late Bob Deming of Cobleskill. Finishing second was Will Cagle another one of the Florida drivers that came north yearly to run the dirt tracks of the Northeast.


The 1980 running of the Schaefer 200 was one for the books and is still talked about today. Car builder, Kenny Weld and driver Gary Balough teamed up to bring an unbelievable creation to Super DIRT Week. What would be nicknamed the “Batmobile” was fast from the time it made it’s way to the track and it became what many would try to duplicate the entire week. It couldn’t be duplicated but many tried to adjust to and add to their cars trying to keep up with the black No. 112. At the end of the day no one had anything for Balough. We know that after the event officials made sure this would not happen again as the rules were rewritten. What do you think? If the “Batmobile” was back on the track would it still win? It’s great to see one of our veteran racers do well and this season Jimmy Horton returned to Orange County Fair Speedway and took home his third title at the track. His first Orange County Modified championship came in 1976, he won the Sportsman championship in 1974 driving his Dad’s No. 43. Horton was Orange County champion once again in 1996 and now in 2017. Horton has titles at other tracks also; at Bridgeport Speedway in New Jersey he was nine time champion, 1975 was the first then 1977, 80, 82, 83, 97, 98, 2003 and 2014. He claimed two New Egypt titles in 2004 and 2006. Horton turned 61 years old on July 3rd and we look for him to do well for the remainder of this season.

As we close we look forward to a trip to Utica-Rome on Tuesday for the kick off to Super DIRT Week with the running of Tuesday Night Thunder, Super DIRTcar Series 358 Modified event, the Broedel Energy DIRTcar Sportsman and the 360 Sprint Car Cole Cup. On Wednesday morning Ed and his brother Rich will head out early for Oswego looking forward to this year’s parade at Noon on Wednesday. See you at SDW.