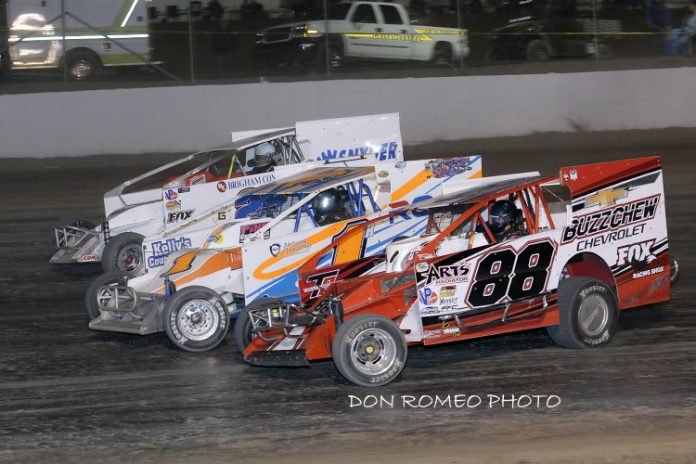 For the second year in a row Mike Mahaney ended his day one spot shy of the ultimate goal in the Outlaw 200. The King Ferry, N.Y., driver came up just short to eventual winner Billy Decker. This year’s run was impressive as Mahaney drove from 37th to finish in second.

“We were second last year with this car,” mentioned Mahaney. “My Buzz Chew Chevrolet team did a great job again. We just struggled in qualifying. It was a fun night coming up through the field. This race is really fun when it gets real slick. When you can come from 37th to second, that’s pretty cool. It was a good night.”

Mahaney had some luck along the way, especially in the second half of the race. Over the first 100 he was able to make his way to eighth. He stayed in the top ten for the second half using a couple of well-timed restarts to pick off more cars. He got lucky that he seemed to end up in the bottom lane for the green. It was the lane you had to be in after the track took rubber.

“Midway through the second half it starting rubbering up,” he said. “At that point you needed to be on the bottom. A couple times I got stuck on the outside and got passed but luckily at the end, when it really mattered, I was on the inside every time. That was just what it took.”


Although he fired on the bottom, the preferred lane, things got dicey as everyone fought to get to the inside lane as quickly as possible. Mahaney ended up getting in a jingle during one of those battles which damaged his No. 88.

Larry Wight started dead last in his heat. He missed qualifying from that event before starting mid-pack in his consolation. He also failed to qualify from there as well. At that point was required to use a top five in points provisional to start the 200. He made the most of the provisional to end the day in third.

“We struggled a little bit in the beginning of the night with starting last in our heat,” Wight said. “We just weren’t able to make up any ground and that killed us. We ended up chasing our tale the whole night.”

Wight was finally able to get things rolling during the first 100 laps of the feature. He made it all the way up to seventh from his 45th starting position before the break.

At the break the team made a few adjustments to the car, unfortunately those changes didn’t get him all the way to where he needed to be.

“We made too many adjustments to the car for the second 100,” stated Wight. “We pulled a lot gear out of it and a lot of throttle out of it thinking that it might not rubber up. Then about lap 20 it felt like it rubbered up. After that it was keep it straight, keep the tire under it and wait for everyone else to slide up.”

Ultimately Wight was happy with the finish, but a win in the 200 continues to elude him.

“We’ll take it,” he said. “We’ve been on the podium of this race too many times and not been at the right part of it. We’ll get there.”