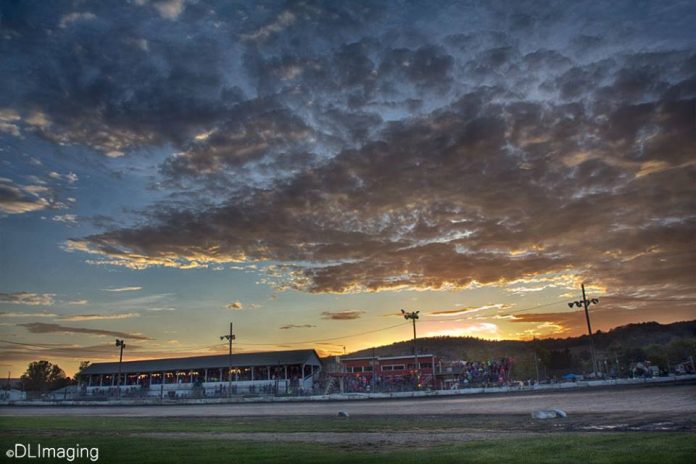 As Super DIRT Week continued to unfold with all its hectic peace, it was nice just to get away from it all and travel down to Afton Motorsports Park for the Short Track Supernationals, held this past Saturday, October 7.

The track is located at the Afton Fairgrounds on the outskirts of the town, a quiet village within Chenango County, formed in 1857, and is just 132 kilometres from Syracuse. This small sleepy town was about to host one of the best short track racing series in the country. With over 60 Modifieds checked into the pits along with a banner field of IMCA Modifieds, Street Stock and the Vintage Class, the 128-year-old Afton Fair grounds were about to come alive with the roar of the big-block Modifieds, duking it out in the 10th annual “Working Man’s Race.”

For Rusty Smith, it would be a day of redemption. For the past several weeks, Rusty, along with wife Julie, has been discussing that, “all this hard work we are putting into our dirt car race program is just not paying off.”


But that would all change as the race day unfolded.

The 34 Team was on the mark from the drop of the first green of the day and would take home the win over some very tough competition.

“I knew after the redraw we had a good combination for the feature. It ended up being really good,” Rusty explained during the post race interview. Along with the excellent redraw, Smith would also move up in the start grid as pole sitter Duane Howard was forced to the back of the field in his back-up car after his primary car was damaged during the American Racer Cup one-on-one match races held earlier that night. All in all Rusty Smith had a banner day of racing and a well-earned victory. Smith was not the only one to visit victory lane. Ryan Watt, who failed to qualify for the main 50-lap Modified event, would take home the American Racers Cup Champions Challenge, worth $2,000.

The Short Track Supernationals were definitely a pleasant change from Super DIRT Week and well worth the drive down through the rolling hills of New York State. The Afton Motorsports Park team put on a spectacular show on the historic fair grounds, thrilling the capacity crowd with some of the best racing of the season — a nice way to cap off the year