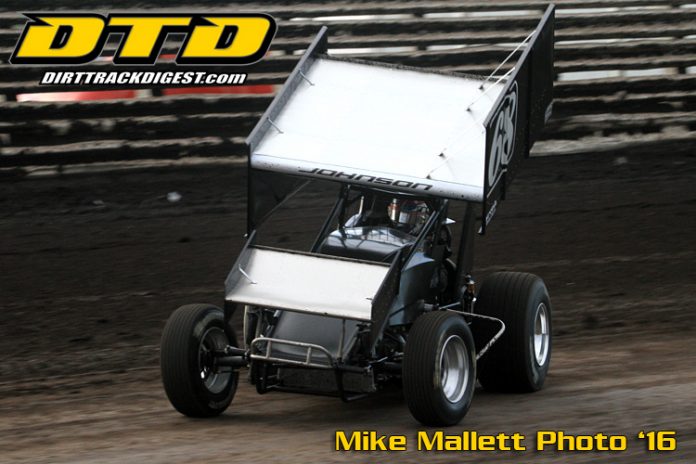 I really hate to keep blatantly hyping this seasons King of the West-NARC championship battle …, but man …, it’s been one of the best ever. Its had its fair share of twists, turns, drama, and after our October 6th race at Ocean Speedway, some heartbreak. Unfortunately, the heartbreak honors slide-jobbed their way right into the Cory Eliason/Antaya Motorsports camp – and not by their choice. After winning the season opener at Kern County Raceway Park, this team has been smack dab in the middle of the championship hunt with Gio Scelzi, Bud Kaeding, and DJ Netto. And they have worked hard along the way. They’ve had some rough nights mechanically, but always managed to find a way to bounce back. This time there wasn’t any bounce in the bounce back.

After qualifying fourth quick, Eliason experienced some serious vibration which was diagnosed as an U-joint issue. The Antaya team rolled up their sleeves and rolled in the dirt to get it done, like they have done all season long. Before they were done, just about everything bolted on behind and under the driver’s seat was replaced. It appeared everything was good to go until Eliason took a couple of test laps before the semi. As luck would have it, the U-joint shattered into pieces. Done for the night, do not pass go, do not collect 10,000 championship bucks. Before their Good Guys Rod & Custom Association tow rig pulled out of the Ocean Speedway pit area, the team had dropped from just six-points off the pace to 34 points behind the leaders. At this point, unless something dramatic happens between Gio and Bud, Cory get’s the play the role of spoiler during the final two events.

Speaking of rough nights, the DJ Netto and the Tri-C/Netto Ag team also experienced one at Ocean– except theirs involved a lot more parts and pieces. DJ took a wild ride with two laps remaining, after battling eventual winner Shane Golobic for the same piece of real estate in the first corner. The famous “3C” catapulted high over the first turn berm and it appeared the throttle stuck wide open until the car finally smash landed on its lid. Then a full second later, the spurting oil tank ignited in a fireball that made everyone’s heart skip a beat. Luckily, DJ climbed out of the car under his own power, only to collapse to his knees a few feet away. After a few minutes of sitting in the ambulance to let the adrenaline subside, he was fine. Not that we are keeping track of this, but it was the worst crash since Bobby McMahan’s tumble at Tulare, or your choice of the eight or so at the Bradway race.

And since heartbreak and tough times seems to be the theme here today, it’s not hard to look out the window and see a smoky haze. Collectively, all of us diehard racing enthusiasts have connections to a huge “racing family” in the Napa Valley – the same Napa Valley that is literally burning to the ground. It’s so bad that the evacuation “safe zone” of the Napa Fairgrounds and Calistoga Speedway is being evacuated. On the other side of the hill, Petaluma Speedway promoter Rick Faith and his family were forced out of their home. Announcer Ron Lingron finally got his wife Margaret home from the hospital after a three month stay – only to have to evacuate to another location. Many others are still at home with no power (Sparky Howard), or have their cars loaded and ready to roll at a moments notice (Chase Johnson & Family.) The bottom line is we all know someone in the racing community who is, or will be, effected by this tragedy. Reach out and find out what kind of help they need. The racing community has a reputation for taking care of its own. Let’s keep it going.


MORE OCEAN SPEEDWAY NOTES: Bud Kaeding led Gio Scelzi by five points entering the event. By their own high standards, both teams struggled. Kaeding started ninth, but a late race 360 pushed him to back of the pack. He rebounded to finish 13th. Scelzi started 11th and ended up ninth. He also scored a couple of qualifying points. According to the official King of the West-NARC calculator, Scelzi is now back on top of the standings by a slim 798-797 margin over Kaeding with only two races to go. … By the way, there have been four lead changes at the top of the point standings this season. Eliason (Race 1), Kaeding (Race 2-6), Scelzi (Race 7-8), Kaeding (Race 9-13), and back to Scelzi (Race 14). The spread between first and second (and sometimes third) has never been more than seven points. You can’t make this stuff up! …

… Kurt Nelson put together a very impressive performance in the “OB1” ride. He finished seventh, ahead of Kyle Hirst and Gio Scelzi. … Jarrett Soares won the 12-lap semi, but got beat up at the start of the feature with a flat left rear. … Dominic Scelzi’s runner-up finish was his first KWS-NARC podium finish of the year. … Justin Sanders is always a frontrunner at Watsonville. In three events, he was the quick qualifier twice and score two runner-ups and a third in the features. His third place finish on Saturday wasn’t helped by the “9” pill he pulled in the dash inversion draw. The only driver better in the three Ocean Speedway features would be Shane Golobic, who walked away with two victories and a third. ,,,

NARC NOTES: The KWS-NARC championship banquet will take place on Saturday, December 16th in Santa Cruz, CA. Information will be sent out in the next couple of weeks. We will be distributing $62,000 in championship point fund money to the top 15 teams. … What is the secret to winning a King of the West-NARC Fujitsu Racing Series main event? Based on statistics, we probably wouldn’t recommend winning the Hoosier Tire’s Dash. Of the 14 dash winners this season, only one driver has gone on to win the headliner. Who would’ve guessed that? … Who has the most podium finishes this season? Kaeding and Eliason (6), Gio Scelzi and Shane Golobic (5), and DJ Netto with (4). This is a tough circuit! …

… KWS-NARC recently announced the addition of a new associate sponsor. PSC Industrial Services piloted their first event at Ocean Speedway. The most common question I was asked was, “what do they do?” Everyone is expecting that PSC is attempting to sell a product or service. In reality, they are actually using our races as employee recruiting events. They are a nationwide company with 40 offices in California and – like most companies – are looking for a few good men (and women) to hire. So, if you are looking to upgrade your career and land a job with great compensation and benefits, you need to visit their booth at Stockton on November 4th. By the way, to find out what they do, go to pscnow.com. You can apply for a job right on their website – and tell them that the King of the West-NARC sprint cars sent you! … The KWS-NARC sprint cars will be racing at Kern County Raceway twice in 2018. … Everything else you could possibly want to know about the King of the West-NARC series can be found at NARC410.com

And finally, you don’t want to miss Saturday’s (October 14th) Penny Newman Grain Cotton Classic at Keller Auto Speedway. After all, it’s bring a friend to the races night. Well, not exactly, but you should be bringing your friends to the races every weekend anyway. #justsaying Let’s pack the place and finish the season strong. After that, it’s the big KWS-NARC – SCCT season finale at the Stockton Dirt Track on November 4th. Tickets are on sale for that event now.

Coming to you live from Auburn, CA. See ya!