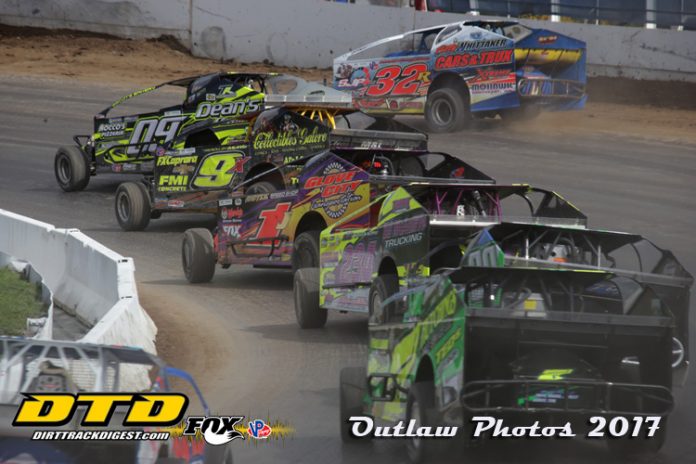 I had a good feeling about this year’s Super DIRT Week.

After all my father always told me, “Once is a mistake. Twice is stupidity”.

There is no way the track surface was going to be as horrible as the debut race. Sure they had more time to lay it out, but when I heard Larry Fink and Eric Kingsley were involved for the ’17 edition I figured this would be okay.

The Internet trolls refused to give anyone a chance and had nothing but critical comments leading up to the event. Well, where are they now?

Seriously, these guys and their team did a hell of a job. Maybe the track wasn’t as racy as everyone hoped on Saturday afternoon, but as Billy Dunn noted, “It was typical day time conditions.”

Sunday was just the way everyone hoped it would be, but it took a bit of time for the track to allow for solid racing. Once the planets fell in line it was one great show with the win decided with just a half lap to go.

Who knows, but hopefully soon so at least we can stop the Internet threads about the race being at CNYRP, Rolling Wheels or at a track being built by an unknown person.

Alan Johnson has been at Super DIRT Week for as long as I remember. This year car owner Mark Spoor and Alan came to Oswego ready to go again.

For decades he or his car owners have spent time, money and effort to race here.

So what does he get for it…someone decides to steal over $2,000 in t-shirt money that Alan’s daughter, family and friends helped sell during the weekend.

I hope this scum isn’t a member of the racing family and is just a person who figured he or she was going to steal something. Alan certainly didn’t deserve this and we all know drivers don’t get rich on t-shirt sales (unless you are Kyle Larson at a short track), but that money probably goes back to buy more merchandise and maybe a bit back into the team.

Race fans are loyal and supportive and I know folks are sending a little bit here and a little cash there to either Mark Spoor’s address or to Alan or his daughter Danielle.

Alan Johnson didn’t deserve this. He’s a legend and he and his family have given so much to this sport.

My stomach turns in today’s world with people who simply steal because they can. This isn’t just a one time situation that Alan Johnson’s team faced. It is becoming the norm. It seems all right for people to simply take what isn’t theirs. So much for respect and decency.

As a reporter everything I needed was made available by the folks in the media center. Christina, who appeared to be in charge, did an outstanding job. She was quick distributing the information and reacted to the needs of the reporters. One of the outstanding things she did to help us old guys who still like to interview podium finishers was to change what the earlier decision was. Apparently there weren’t many of us around earlier in the week when the decision was made not to bring the drivers to the media center. I found this out just before the Saturday 150 and Christina said she would arrange for the top three to be there after the race. She accomplished that and much more during the week.

There are some “opportunities” for the DIRTcar folks for 2018. The lines to the grandstand on the initial wave of fans were simply too long in the backstretch. There was only one entry gate open and even though there were two turnstiles usually only one was manned. Fans tried to go through the second turnstile only to have the guy collecting tickets stop taking tickets and send those other folks back out in line. It took way too long to get inside.

Oswego Speedway concession stands weren’t open. Some say it was a result of the late payment by DIRTcar to Oswego. However, fan comfort and convenience seemed to be missing on this one. Certainly there were many outstanding vendors along the backstretch (never got to the front), but many certainly weren’t ready for the number of people who were buying. Great products to buy, but some seemed to fit more of a church bazaar than a race that attracted thousands.

While addressing opportunities you have to take care of those who take care of you. The drivers, crews and photographers were held hostage in the infield during lengthy periods whether it be practice or racing. However, there wasn’t any sort of concession stand. They needed to stay hydrated (not a common problem in October), but even if a stand only sold water it would have helped. There was a concession stand right there, but it was owned by the speedway and closed.

For the first time in many years I didn’t attend many of the satellite shows. I was announcing Utica-Rome with Mike Mallett, traveled to Weedsport in the rain on Wednesday and took the rest of the nights off. However, one thing I hear over and over again is that with so many cars during SDW there needs to be a way to streamline the satellite shows. Fans really don’t like getting out close to midnight for the small-block/Sportsman combo shows. Maybe timed hot laps would be better for at least the Sportsman.

Was I the only one who feared a follow the leader race on Sunday? Saturday wasn’t pretty and the more I see that type of racing I would love to see the major races under the lights. However, Gary Tomkins said, “Do you think those people at Fulton tonight (Saturday for Outlaws) feel that way?”

It took Peter Britten a while to get to the media center for the post race interviews, but he showed up. I’m not sure I would have. He was genuine, honest and forthcoming despite being heartbroken and devastated. Peter answered every question and stayed until the final reporter had asked the final question. Classy is a word to describe him. If the Ray Graham-Peter Britten combo is together next year it could be interesting. Troyer fans were mighty happy with the performance.

Am I the only person who would love to see the Silver Crown or Sprint Cars on the Oswego surface?

I had hoped that maybe the clay would stay down over the winter for an early season DIRTcar show in the Spring of ’18. I can hope can’t I?

I wanted to do a story with Dave Rauscher, Jeremy Pitcher and a few others, but the Sunday schedule got compacted due to the early day rain and never able to get it done. So sorry.

Fields of cars were more than respectable. I can’t believe some of the Pro Stock guys who arrived on Tuesday and really didn’t see the track for days, but they just wanted to be there.

Rob Yetman and Dave Marcuccelli are the class of their divisions.

That Ryan Godown hit on Sunday really scared me. The sound of his car slamming into the third turn steel with a huge crunch was something Oswego veterans don’t like to hear.

Many thanks for the patience and cooperation of all of the drivers, crew members and owners this weekend for taking time to talk with me. I attempted to keep the fans informed as I know many folks were unable to attend. I tried to provide the feel and information of what was going on. I’ll try to do the same at Charlotte in November.

To Kyle, Don Davies and Darren Forbes thanks for the ride to and from the media parking lot. Gotta talk DTD into renting a golf cart one year for the old guys like me.

Maybe it isn’t Syracuse, but you know what it is becoming like it. There is the mud bog for the campers, music went to the morning hours, party beverages flowed and unlike Syracuse the racing was much, much better. The race cars came out in all four classes for competitive fields.

Still love the idea of the parade through town with race cars and pace cars on Wednesday. This year folks were lined up throughout the route and the entire student body from Fitzhugh Park Elementary School sat along Route 104 as the parade powered its way up the hill back to the track.

The Oswego community has bought into this and it would be nice if the city could find a way to tie in events and get the campers downtown. A race night on Thursday would be fun for those fans who don’t head to Brewerton. Thursday is usually a farmer’s market night so it would be great to modify the event for racers. Bristol does this and it use to be outstanding. Also campers need a way to get downtown. Oswego has much more to offer than it use to.

By the way, if you are in Oswego at the corner of West Eighth and Bridge Street is Greene’s Ale House. They have some wings that won National honors at the Buffalo Chicken Wing Festival. Stop in sometime and tell them you read about it on DTD. DTD and Greene’s supplied DTD writers and photogs with several of the flavors on Friday night. Thank’s guys as it helped keep me going. Nourishment…what better than chicken wings?

Well, for another year this is the final story on Super DIRT Week. Hopefully, you enjoyed at least one of two pieces that I wrote during the marathon and it is a pleasure writing for the fans.

For those folks who stopped and talked to me thanks for the comments and suggestions. Any other comments or thoughts can be sent to foley395@hotmail.com.