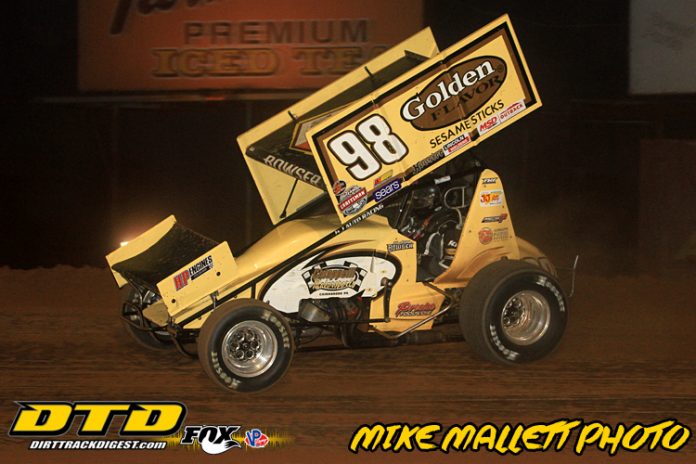 It took him multiple tries, but Carl Bowser finally broke through for a win in the 410 Sprint Car portion of the Steel City Stampede at the Lernerville Speedway. The 30-year-old driver has finished in the runner-up spot more times than he can count, but on Saturday night he refused to be denied the win in the one of the biggest non-sanctioned events in Western Pennsylvania.

The win scored Bowser a $3,000 payday for his efforts in the 25-lap A-Main.  He got it done behind the wheel of the Tom and Fran Chiappelli owned No. 98.

“This is a big win out here,” commented Bowser afterwards. “It is particularly one that has eluded me out here. I’ve run second here four or five times and could never seal the deal. It’s really good to do it for Tom and Fran, my new cars owners this year. That means a lot.”

Bowser stared from the fifth spot with his Golden Flavor Sesame Sticks sponsored car. He quickly found the top lane which allowed him to track down early leader Jack Sodeman Jr. Sodeman was working traffic on the bottom of the track when Bowser flew by on the outside on lap eight. He was never challenged from there.


“He gave me the top,” said Bowser. “I knew when I got to him that I was probably better, but I knew with a guy like Jack (Sodeman), he’s the veteran in the area, if I showed him the top he would get to the top. He was in the middle to bottom. I was biding my time and waiting. We got to traffic. When he ducked to the bottom I got him on top and kind of set sail.”

The win draws to a close the season for Bowser after his first full year with the Chiappelli team. Bowser’s enjoyed having the opportunity to work in conjunction with them.  It took a few years to get done, but now that they are together things have been going well.

“It’s great,” he said of the new relationship. “I’ve known Tom and Fran for a really long time. We tried to make some deals in the past. When I talked to them last fall everything fell into place. It’s a whole partnership. It’s kind of the best stuff from our team, the best stuff from their team. They are nice people. They’ve gotten the short end of the stick a few times with drivers in Central Pa. They are great people that love racing. There is no limit on what they want to spend to have a competitive race car which is really nice.”

Over the course of their first season together they’ve experienced some hard times as they adjusted to working together. Once they got comfortable, things started clicking with the team capturing multiple feature wins during the second half of the season including the Stampede feature.

“This is a really nice boost,” he said. “We didn’t how many growing pains we’d have this year with the new team. We found out there was a few of them. We did a lot of traveling, which is something we haven’t done in the past. There was some stuff to learn and grow that way, but ever since the middle of July we’ve been clicking. Clicking as a team and it’s really showed up on the race track.”

As mentioned, Bowser got his first taste of steady action against the tough Central Pennsylvania competition at Williams Grove Speedway and Port Royal Speedway. He also competed with the All-Star Circuit of Champions. Although their results were hit or miss, the experience was more than rewarding as help improve the team overall.

“It is a lot different,” cited Bowser about his Central Pennsylvania experiences. “I don’t know how many times we were at Port (Royal), 12-14, so it was a lot. The competition in Central Pa. is so tough. We ran a lot of All-Star (Circuit of Champions) races there and at the (Williams) Grove, a ton of Port. You can learn. The reason we went there is because you can learn in two laps what you might learn in a whole night in Western Pa., show because the guys do it professionally. That is what really shows up at the end of the year. We learned a bunch, a lot of ways we can change a race car and make it do stuff and it’s been clicking.”

With the Stampede now complete, Bowser and company are also concluding their season as they look ahead 2018. Bowser said they are in the final stages of making some “big plans” for next year.