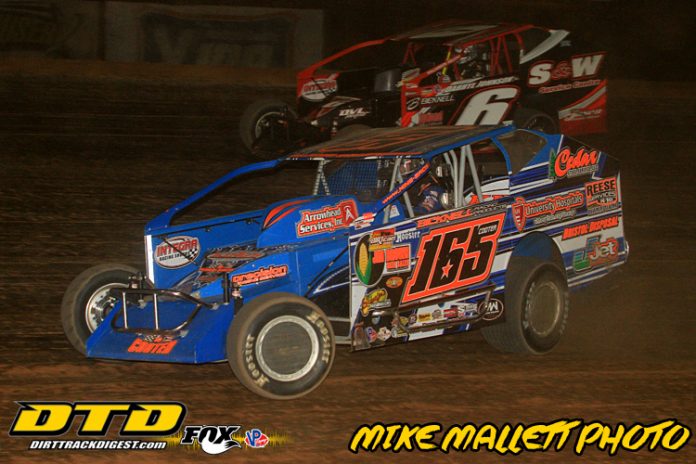 It came down to the final turn on the final lap, but Rex King Jr., did something that not many people can say they’ve done this year. He held off Mat Williamson at the Lernville Speedway. Williamson threw everything at him on the final lap only to come up just a few feet short at the line. It was King’s night to take home the $3,000.

“Dumb me I didn’t even know that it was the last lap, honest to God,” said King. “He (Williamson) slid me going down into one and I thought it was pretty early. I thought we were going 40 laps. We came around and I thought he had me. There was just enough in three and four to get him back. We came to the checkered together. That was awesome.”

It was race between two good friends. They pitted together, race together during the season while King helps Williamson at other races during the season. That made the race even more fun because King could trust him to race him clean.

“We are good buddies,” mentioned King. “I helped him all last week at Super DIRT Week with the 358 car. I know I can race with him. You get with some guys and they are a hammer.”


King, a former winner of the event, worked the high-side of the ultra-slick racing surface right on the edge. A few times he even put his right rear Hoosier tire over the berm only to regroup and keep Williamson at bay.

“I’d run in there and get a little snug,” mentioned King. “The way the track was tonight you had to be out of control if you were going to run up there or he was going to pass me on the bottom. We had to put it where we needed to. Luckily it paid off.”

The race featured multiple cautions setting up side-by-side restarts between King and Williamson. Each time King elected to use the outside lane and then fire through the middle coming off of turn four. He was able to keep Williamson down far enough each time to keep the lead for all but one time, but he was fortunate that the caution came out to negate the pass.

“I was pretty happy,” stated King about the yellow that saved the lead. “I was going to be more concerned if he was the leader and what lane he was going to choose. I was restarting good, firing real well. I was little worried, but luckily the yellow came out and it played in our favor.”

As for the other restarts, King was strong each time in the preferred lane.

“I knew he would leave me a lane coming off the corner because we race so good together,” stated King.  “I knew he wouldn’t stuff me in the outside wall so I chose the outside. I was pushing him down a little bit so I could get where I needed to be to fire and it worked out for me.”

That is King’s final race of the season as he said, “I’m going out on top.” He’ll head down to Charlotte to help his brother Russ in the Late Model division.

Williamson nearly pulled off the shocking victory on the final lap only to come up a few feet short. It was a battle right up until the final lap with Williamson finishing a close second.

“This is the story of my life the last week,” cited Williamson after his second place Saturday and last weekend in the 358-Modified portion of Super DIRT Week. “We were good. Cooter (King) had the advantage on those starts and he had the preferred line. I just couldn’t get by him. I had to slide him on that last lap and I knew he was going to slide me back. I tried to cross him up and get a run. I don’t know what the margin of victory was, but it was close. Hat’s off to them guys. They are great to race with.”

Williamson has dominated Lernerville Speedway all season long winning another track title while scoring seven victories. He has yet to win the feature during the Steel City Stampede.

“We’ll have to try again next year,” he said. “This is the one race I can’t win. We’ll win nearly every race here all year, but I can’t win this one. It’s the one that keeps eluding us. I wanted the belt buckle and the big check. We didn’t get it tonight.”

In his pursuit of the win, Williamson tried every lane. He worked low, middle and the top. It seemed like the only place he could make up any ground was right on the top of the speedway.

“We tried the bottom a couple times, but we just couldn’t get by him,” commented Williamson. “He had a pretty good car. I messed up in turn four there and hit the wall and had to gain the 10 car lengths back that I lost. It seemed like he was getting nervous at the end. We were coming, if he kept missing it we would have been alright.”

Jeremiah Shingledecker came from the eighth position to third. The Polk, Pa., driver admitted that his car was lacking a bit during the 25-lap feature. He expected the track to have a bit more bite than it did.

“We were still a little bit off tonight,” mentioned Shingledecker. “We thought with the moisture in the track we were going to have a little more bite in it. We kind of adjusted for that and it turns out we needed a little more side bite.”

Shingledecker had his own intense battle with Garrett Krummert during the race. The pair lined up next to each other multiple times for restarts. They passed each other several times during main-event. A lot changed depending on what lane they restarted in.

“There was enough momentum and bite on the top that it was hard to roll through the middle and keep pace,” stated Shingledecker. “It seemed like whichever one of us started on the outside had the advantage.”

At one point during the feature, Shingledecker closed in on King and Williamson in traffic. He was able to find some open spaces to pull up to their back bumpers. He lost that advantage after a caution slowed the pace of the feature.

“I would have hoped that the green stayed out a little bit longer,” he said. “They were not only trying get around the lapped cars, they were rubbing doors and slowing each other down a little bit as well. I was hoping that would work out for me. Good for them, they finished a really good race.”

Shingledecker will now get ready to head south for the World Finals in Charlotte at the beginning of November.

Steve Feder started near the back of the back on Saturday after problems sidelined him in qualifying. He moved forward to end up 15th at the conclusion of the event…