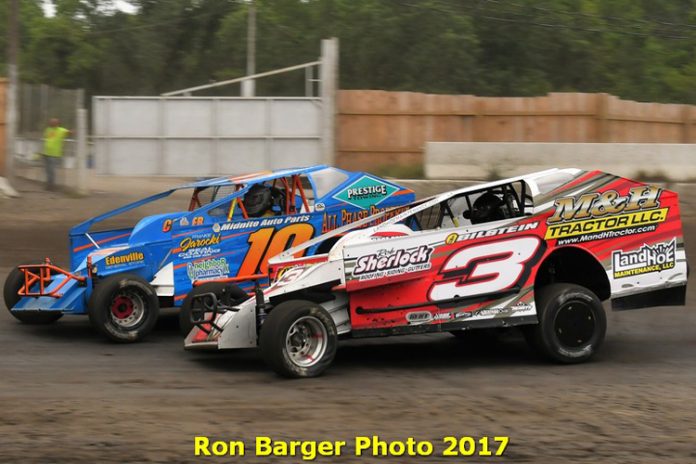 MIDDLETOWN, NY – With Eastern States less than a week away, the competitors from all forms of racing gathered on Saturday night to shake down their equipment and try to get a baseline for the upcoming Eastern States 200 weekend. Drivers shook down big-blocks, small-blocks, Sprint Cars and Street Stocks.  They wanted to find out if they had all the bolts tight, scuff tires in and check various shock packages for drive-ability and tire wear.

Brett Hearn rolled into his former weekly stomping grounds for a test session. Hearn had traveled overnight back to his shop in Sussex, N.J., from his race at Brockville Ontario Speedway. Car owner Brian Madsen had a pleasant surprise when he was informed that Brett was guaranteed the 8th starting spot because of his win at the Lebanon Valley Mr. DIRT event held in late summer.

“You just made our whole weekend a lot better,” said a beaming Madsen.

“I get those press releases,” said Hearn. “I don’t remember seeing that but that’s probably true since they did it last year.”

Hearn, who had his Lebanon Valley big-block and another car that had a small-block in it for a test session was his normally confident self after the tests.

“I got a few guys on what I call IR (injured reserve) but my crew has lots of experience and I have complete trust in them.”

Hearn also followed up on his shockingly poor qualifying performance at Oswego.

“We had our tires and stuff in another location and didn’t get to them. It’s not that my crew or myself weren’t prepared.”

Of peculiar interest was Hearn’s use of Integra Shocks during Super DIRT Week.

“We were searching for something but there is nothing to read into this. We are still on Fox and its a dead issue,” said Hearn.

“We have seven cars in the stable right now. We need to get down to about three or four cars. So we are going to have a tag sale here after Charlotte. Wheels, tires, shocks, springs, cars and probably this hauler and truck. We have a new one for 2018 coming and we have some new cars we are building so it will be a busy off season for sure.”

When pressed about Hearn’s racing plans for 18, Madsen said, “We have to sit down and discuss a lot of things. Nothing is off the table. If I had to be pinned down I would say at a minimum you would see Brett at Lebanon Valley.”

Hearn will not be entering the Thursday night STSS event.

Hearn will have a car on display at the upcoming PRI Show. It will be the car he won his 900th career win in. As of now Hearn doesn’t plan on having a car at the annual Motorsports Expo in Oaks, Pa., in January.

Hearn will open his 2018 season at the Volusia County Fair Speedway in Barberville, FL for the annual Winter Nationals in February.

Danny Tyler is out of the Bill Pascual owned modified. Danny Creeden will pilot the car in the 200.

Pascual said, “When I build a car I get the best of everything. I have new motors coming from Bedell for ’18 as we went through a series of engines here this year. Who ever I decide to put in the car for ’18 has to be 100% committed to the team.”

Pascual also noted, “Danny sat on the outside pole here and won a feature race for us and was involved in a couple of jingles that weren’t his fault but I decided to make a change. I am still friends with Anthony Perrego too. I understand why he decided to leave us after the engine problems we had. He has to race for a living. At the end of the day, I put nothing but top notch stuff in my cars and I expect a certain result. I don’t want the driver to say I didn’t give him every tool available to be successful and I don’t want to not give a driver everything we need to be successful.”

Eddie Marshall and Paul Gillardi both stopped in for a big-block hot lap session. Did you know Eddie Marshall is an avid skier both in the winter and during the summer.

“During Super DIRT Week when I was home I was out on the lake skiing and Ill be on the lake tomorrow morning at 830 a.m.,” said Marshall.  “I got to get in all the skiing I can on the water now before it turns cold.”

Gillardi was all smiles about racing in the 200.

“I live very close to here and racing at Lebanon Valley each week and going fast it gives you a certain bit of calm to come here and get after it. While this place is fast as is the Valley, there is no banking here its a fun event to race in.”

Joking with the ambassador of speed at Middletown, Richie Eurich, I quipped that he was like the Wayne Newton of Orange County. Eurich, with his electric smile said, “I don’t have the money he has and if I did I wouldn’t be here.”

Eurich also noted that he feels great and approaching the 200 as “just another race.”

Eurich was testing out two cars that had two different shock packages on them. One on Billsteins and another on Integra.

Craig Mitchell was testing a car he hasn’t run since the last Deyo show at Orange County.

“We are scuffing some Hoosiers and some (American) Racers for Thursday night. Once we do that we will load up and go home.”

Super Models Get Dirty Too

Earlier in the evening Winter Meade was seen scraping mud off her sportsman car without a crew member in sight. “If I don’t do it, whose going to do it” said a smiling Mead.

Changes In The Wind

Tim Hindley will be piloting the No. 300 car he had during the nostalgia night this year. Also, Hindley indicated that if there wasn’t changes in management over the winter that he would be taking his act to a new facility in 18.

“I’m too old now not to have fun. If I am not having fun than its time for a change.”

Hindley had a falling out with management at the mid way point of the season at Orange County. Instead he went to New Egypt, Albany Saratoga and was going to make an appearance at Bridgeport in mid September but his car owner decided to prepare for an all out assault on the 200.

Tommy Meier’s dad celebrated a birthday recently. According to him he’s only 32.

Longtime crew member and former co-owner of Tommy Meier’s small-block, Jerry Kurz has a fresh outlook on things in life. On October 9th Jerry suffered a heart attack while working on Tommy’s car at the shop.

“I had this pain in my shoulder and then by lunch time it went to my chest area so I had someone take me right to the hospital to get checked out. I was diagnosed with some clogged arteries and they put a stent in it. It was a widow maker type of heart attack.”

Matt Schultz, son of long time Orange County competitor Chris Schultz, is going to try and qualify for the small-block 100 for Saturday in addition to the Sportsman event.