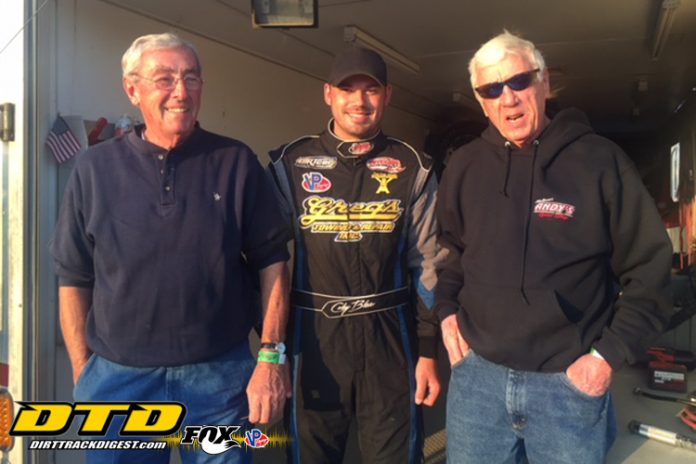 After a two week break Glen Ridge returned to action with a first attempt a Saturday night racing under the Parillo/Sefrin regime. Both racers and fans seemed to make the transition, the car count was about the same and the stands showed a typical crowd. According to Parillo and Sefrin when we asked, they are planning to run the next two weeks. Look on their website or Facebook page for details. On Saturday a few non-regulars made the first trip to the track and what they found was a slick fast track showing that much work had gone into preparing the track surface. One outsider, Nikki Ouelette of Westfield, Mass., was taking the night to shake down a car she recently purchased and will be repainted during the off season. Nikki is a regular at Lebanon Valley in the Sportsman division and at The Ridge she raced in the Limited Sportsman division. She was glad for the chance to see how the car would handle on a race track.

The racing at Glen Ridge on Saturday was good in all six division in competition for the night. The Four Cylinder division winner was P. J. Bleau. The combined Sportsman/Modified Vintage class raced with honors going to the No. 62 of Rob Sanford (Modified) and the No. 99 of David Charczuk (Sportsman). Mike Block won the Limited Sportsman division feature in the No. 2. The Pro Stock feature was action packed with the checker falling on veteran Jimmy Normyle, Sr. in the No. 7N. In the combined Slingshot division the senior portion was won by veteran racer, Danny Ballard in a familiar No. 22m and Matthew Backus was the winner in the junior portion in his No. 52m. Rocky Warner was the Crate Modified feature winner in the Jake Spraker No. 1J. It was great to see Danny Ballard in the driver’s seat of a race car once again. Ballard is a familiar member of the Grand Gorge Gang even though he lived in Roxbury, NY. During his time in the Pro Stock division at Fonda he accumulated 17 wins and was Pro Stock Track Champion in 1994. Danny then moved into the I.M.C.A. class and picked up 20 wins at Fonda and was I.M.C.A. champion in 2002, 2004, and 2006. Danny is currently a rookie in the Slingshot division but now that he has a win under his belt maybe he will be looking for another title.

Rumor mills are just that and we do our best to talk to the people involved to get all sides of the story. This may not always be the most interesting because we sometimes find that all the drama is for nothing. During the week stories that the Laudy Hoyenga owned team seemed to be parting ways, that he had picked up all his equipment and cars at the Shaun Pangman owned shop where the team worked and that things were up in the air. By Saturday at Glen Ridge when we spoke with Laudy he said they were working things out leaving us to believe that the owner was willing to negotiate. We spoke with one of the drivers that drives for Hoyenga, Cody Bleau and he said that all he needed to know was where he was going to be. On Sunday night we spoke with Shaun Pangman the other driver on the team and he said pretty much the same and that the team is working things out, moving forward cautiously. The team made the trip to Oswego for SDW and had some bad luck against some of the best in the business. So as for the rumors about the team, they were true at the beginning of the week, have changed and things are being worked out and we all know how the racing silly season goes, this could all change by the time this gets to print.

At Glen Ridge on Saturday Cody Bleau was driving the Gregg’s Towing No. 173 Crate Modified. Throughout his career Cody has driven for a few different owners and seems to be able to adjust his racing style in each case. We snapped this photo of Cody and two of the racing fraternity who have been involved in racing for a combined total of 120 years. Laudy Hoyenga as a driver, owner and Marty Beberwyk as a driver, official, track manger and Hall of Fame member. I guess we could say that these two have seen many changes in local racing and it’s not over yet. After a hectic week at Oswego we took a few minutes to check on what we may have missed last week in getting everything together. One was a photo that we shot last week of N.E.S.C.O.T. Treasurer Rich Carpinello who was at Oswego selling the groups calendars. As past president of N.E.S.C.O.T. Ed knows just how much Rich has put into this organization and sometimes we don’t always thank the people for all the hard work they do. Rich is not a talker, he is a person that gets things done. Thank you, Rich.

Next we checked on a possible new record of Modified wins in a season. With his wins at Oswego during SDW, Matt Sheppard raised his single season win total to 39 wins but Matt will have to go much further to beat Bob McCreadie’s record 47 Modified wins in a season for 1994. It’s hard to compare both records because we have less events in a season today.
We will be at Eastern States Weekend and that could end our season until The Gobbler on the Saturday after Thanksgiving.