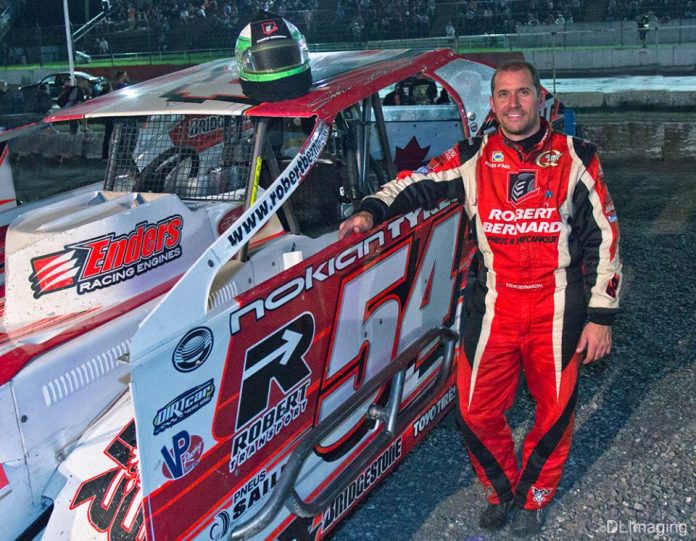 This past weekend saw two DIRTcar champions crowned as they competed in the 9th Annual Brockville Fall Nationals.

Steve set his eye on the overall 358 DIRTcar championship back on August 11 at the Granby Speedway, the first of the 358 DIRTcar series races.

Talking to Steve back then about the series and who would be his main rival, he stressed the point that Chris Raabe, a fierce competitor, was definitely one of his main concerns as the series moves forward. He also pointed to his close rivals in Quebec, David Herbert and Mario Clair, both formidable opponents, but it was veteran driver Lance Willix that would take the early lead in points after two races.

Things would all change when the 358 series returned to Quebec in late September with Bernard picking up victories at RPM Speedway on the Friday, September 22, and at Drummond Speedway the following night, adding to his early win at the Mohawk Speedway the week before.

DIRT week was not so kind to Steve and team 54, with an up and down week of racing, leaving a mere 27 points lead over Raabe going into the Brockville Fall Nationals. The Fall Nationals were not a given for Bernard as Raabe was more familiar with the tricky 3/8-mile track.

Steve would start the 100-lap feature final race mid pack. As the race unfolded with a series of yellows, Steve would be relegated to the back, not once, but twice. In the end, the hard charging Quebecer would finish in seventh place, just three spots back for Chris Raabe.

The 358 championship was not the only title decided at this year’s Fall Nationals. Dave Marcuccilli of Montezuma, N.Y., clinched the DIRTcar Sportsman championship during the first of two nights of racing. Marcuccilli, who has been on a tear for the past few weeks, had just come off a dream run at DIRT week, picking up his second Super Dirt week win. Dave came into the Fall Nationals with a slight lead in points over Rocky Warner and Ron Davis III and was looking forward to the challenge of the 50-lap feature.

With Rocky Warner a no show at the Nationals, this left Ron Davis III, the only challenger capable of over taking Marcuccilli. Dave had an uphill battle during the 50-lap feature race as he was caught in traffic the entire race. A bit of luck crept in the race for Marcuccilli, as Davis III was also caught up in the same traffic. This allowed Davis to finish only two spots ahead, giving Marcuccilli his first DIRTcar Sportsman championship win.

The Fall Nationals once again proved that the road to the DIRTcar championship finishes at the famed Bull Ring.