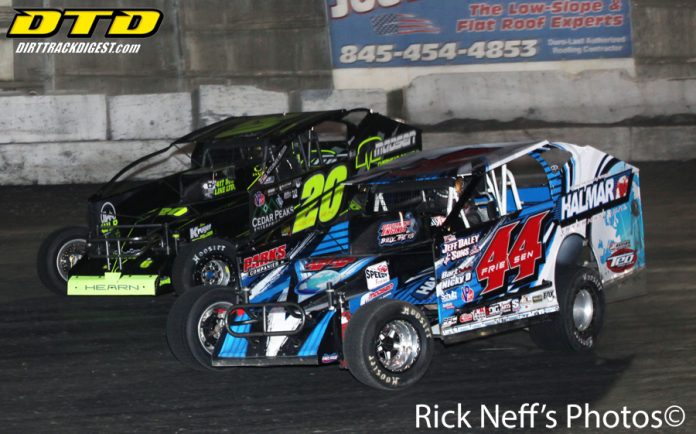 It’s hard to believe, but it’s time to make the annual trek to the Orange County Fair Speedway for the 56th running of Eastern States Weekend.  For the Northeast race fan, other than Super DIRT Week, there is no bigger event in the area.  Huge purses, multiple divisions and drama await those making the trip to the Middletown, N.Y., oval.

Whether it’s a last lap pass for the lead, a scoring snafu, a tech disagreement or just something plain old weird, Eastern States has been known to give fans something to talk about on their ride home on Sunday evening.  There is little doubt that this year there will be more of the same.

Before we get to the post race, let’s take a look ahead at some thoughts and questions as we prepare for Eastern States Weekend 2017.


Traditionally action kicks off for Eastern States on Friday night with qualifying for the big-block Modifieds and another division.  This year everyone gets a bonus of some Thursday night action with the Short Track Super Series finale for the North region.  The 50-lap, $5,000 to win ‘Hard Clay Finale’ kicks-off Eastern States with a bang.

Andy Bachetti has the advantage in the point standings for the Short Track Super Series North region.  It will pretty much take an act of God for him not to win another series title on Thursday night.  Bachetti won the ‘Hard Clay Open’ back in April to kick off the season and he hasn’t looked back.  He also won the series event at Woohull Raceway.  Bachetti, a former OCFS regular, has a 64 point lead over Anthony Perrego and 65 points on Billy Decker.   Pending some major catastrophe, Bachetti leaves with his third series title.  Bachetti also secured, at worst, the seventh starting spot in the 200 by winning the Eastern States qualifier on September 9.

Can Brett Hearn Do it Again?

Brett Hearn is an 11-time winner of the Eastern States 200.  The Sussex, N.J., driver’s last win came in the event back in 2014.  Last year he was beat out on the final lap by Stewart Friesen.  The pair rubbed doors going into turn three with Friesen getting the better of him as well as Anthony Perrego.  Hearn has already knocked down one big payday this year at Lebanon Valley Speedway in the Mr. DIRT Track USA event where he picked up $17,500.  That win also guaranteed that he’ll start no worse than eighth position in the 200.  He’ll look to do better in qualifying on Friday night.  The question is, can he win another Eastern States 200.

As mentioned, Friesen captured his first Eastern States 200 win last year beating out Perrego and Hearn.  Friesen was a regular at the ‘Hard Clay’ in 2016, but not in 2017 as his focus turned to the NASCAR Camping World Truck Series.  On off nights the Sprakers, N.Y., driver stayed close to home taking some cash out of the Fonda Speedway.  It took Friesen a lot of years to get his first win in the event, but can he go back-to-back?

Unlike 2016, Hearn and Friesen will have some additional competition in the Eastern States 200 as Matt Sheppard returns to the Orange County Fair Speedway.  Sheppard skipped the event last year in preparation for the World Finals in Charlotte.  This year Super Matt comes in on a hot streak.  The Waterloo, N.Y., swept Super DIRT Week winning both the big and small-block portions to the tune of $70,000 plus.  Plans call for him to only run the big-block portion of Eastern States which may be good for everyone else.  It’s hard to think of any major Modified event that Sheppard hasn’t won except for the Eastern States 200. His best career finish in the race was a second in 2014 to Hearn.  Is this his year?

Jimmy Horton captured the 2017 Orange County Fair Speedway big-block Modified championship over Tommy Meier and others for his third career title at the track.  His first came in 1976, his second in 1996 and 21 years later he gets another.  Horton also has two career wins in the 200 coming in 1991 and 1995.  He only had one win this season at the track on opening day.  He’ll look for another on Sunday afternoon as he looks to close out his title season with the huge payday.  We’ll have to wait and see if he can hold off the strong group of invaders.

It has been well documented that Tim Hindley hasn’t been thrilled with certain things at the Orange County Fair Speedway and as a result the Monticello, N.Y., driver took his act on the road for the second half of the season.  The good news for the fans is that he’ll be back home for Eastern States.  Hindley has finished in every spot on the podium except for the first one.  He’s been close on so many different occasions to winning the event.  He finished second in 2008 and in 2011.  In 2013 and 2014 he made late race charges to finish third after leading parts of the event.  He has a knack for using a different pit strategy to find his way forward.  He’ll be one to watch on Sunday afternoon.

Past Winners a Plenty

When racing kicks off on Friday for qualifying for Eastern States there will be several past winners looking to etch their name in history again, most notably six-time winner Danny Johnson.  Will this be the weekend that the George Shakelton owned team gets things rolling?  Other former winner’s expected to enter the event include: two-time winner Frank Cozze, Tommy Meier, the ageless Richie Eurich, Chuck McKee, Billy Decker, Bobby Varin, Jeff Heotzler and Jerry Higbie.

Could another one of the locals that haven’t won the event come through on Sunday afternoon?  The closest we’ve come to that was in 2010 when Clinton Mills nearly shocked the crowd with a late race charge.  The race didn’t end the way he would have liked as a tire started going south late with Mills finishing second to Tim McCreadie.

Craig Mitchell, Mike Ruggerio, Matt Janiak, Chris Whitehead, Gary Edwards Jr., Brendan Finley, Chris Shultz, Kirk Horton, Mike Kolka, Bob McGannon and Danny Cronk were all in the top 15 in the point standings at the conclusion of the season.  Of that list Whitehead, Edwards and Cronk took feature wins.  Can one of them pull off a massive upset Sunday?

Be sure to stay tuned to DirtTrackDigest.com during the entire weekend as we’ll have exclusive stories, photos and more from the event.