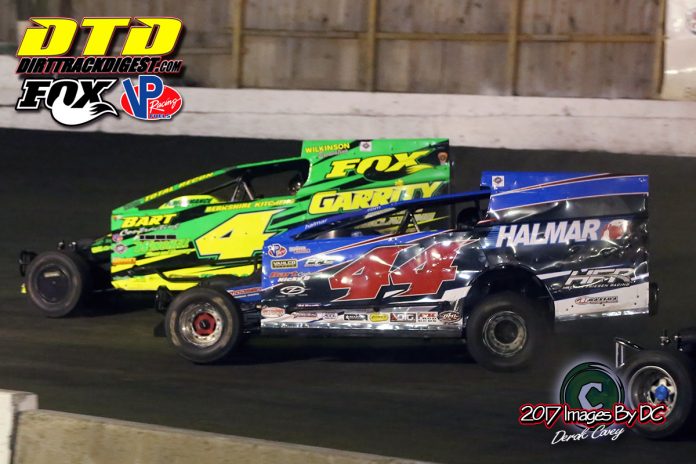 Andy Bachetti came into Thursday night’s ‘Hard Clay Finale’ with a 64 point edge over the rest of the competition as he chased his third Short Track Super Series championship. He was chased in the points by Orange County Fair Speedway regular Anthony Perrego and veteran driver Billy Decker. Bachetti got some help on the night by redrawing the pole for the feature, but that doesn’t tell the whole story.  Bachetti led the entirety of the first half of the race until the flat tire parade began on lap 30. Luckily for him, he got his flat tire early enough that he was able to navigate his way back up through for a second place finish behind Stewart Friesen. That was good enough for the title.

“Being in the mix to win this deal, to chase all those tracks and to be good at every one when we roll out of the trailer, says something about our team, sponsors and everybody,” mentioned Bachetti. “It’s been a hell of year for that. I’m pumped up. It’s awesome.”

Bachetti, driving a Teo Pro car with Fox Shocks on all four corners, has been off a bit with big-block program on a regular basis this season, but his small-block Billy the Kid Performance Engines program has been phenomenal. Bachetti won the Hard Clay Open at Orange County back in April to win the series opener before picking up a win mid-summer at the Woodhull Raceway.

“I think we got some issues as far as our big-block program with the chassis because we are just not clicking on all eight cylinders with our big-block program right now, but we are going to pick that up next year,” cited Bachetti. “I really enjoy racing the short track stuff. It is a lot of fun, a lot fun. It is a lot of work but definitely makes you a good race car driver at the end.”

Thursday night’s runner-up effort is just the first challenge of the weekend. Bachetti will be back on track on Friday afternoon looking to improve his starting spot in the Eastern States 200. Bachetti already has the seventh spot guaranteed to him by virtue of a qualifying event feature win. He hopes to do better.

“To come here and be standing on frontstretch is a positive,” said Bachetti. “Hopefully tomorrow goes good, and with seventh starting spot, that takes a ton of pressure off with the big-block.”

Friesen Finds His Way Back to OCFS Victory Lane

Stewart Friesen hasn’t been on his A-game to end the 2017 racing season. Admittedly the team has been a little off forcing Friesen and his Halmar-Friesen Racing team to make a few changes to their program. They elected to change their shock package. They made the move over to Integra Racing Shocks. Friesen felt like the move paid dividends as he went on to win the Hard Clay Finale.

“The team has worked really hard,” stated Friesen. “This is our first win since we switched to Integras. Those guys have been working really hard with us to adapt our program and vice versa. The Teo Pro Car ran good and Billy the Kid’s (Performance Engines) big-block was good.”

Friesen is the defending winner of the Eastern States 200. A win leading into the event is always a boost and Thursday was no different. It was his 10th career Bob Hilbert Sportswear Short Track Super Series Fueled By VP Racing Fuels Modified victory.

“This is always a fun and exciting week,” mentioned Friesen. “This is the most historical race we have left. To start on a Thursday is pretty cool and a lot of fun. To get a win anywhere, we’ve been in a pretty good drought, to win anywhere we are happy.”

Friesen drove around Bachetti late to take the feature win, but it almost didn’t happen as a few laps prior he got together battling Bachetti as well as Mike Ricci and Jerry Higbie. Higbie restarted with the lead on an overly warn American Racer tire while Ricci appeared to have a bit left. As they raced through turns one and two both Ricci and Friesen went for the same piece of race track. Ricci got the worst end of it spinning in two.

“I hate it for him (Ricci),” said Friesen about the incident. “It still looked Jerry’s tire was about bald, his looked like it had a little bit of tread left.  We got on a run on Andy. I tried to get to the bottom and it looked like Mike was trying to cross up Jerry there. I was in the hole. I tried to get out of it as quick as I could but we just touched a little bit. I hate that for them.”

Jeremy Smith was forced to use a provisional starting spot to make Thursday night’s feature. The Triangle, N.Y., driver started 28th on the grid, but finished the day in spot five. He picked up a $500 bonus.

“I don’t know if I passed them or the tires passed them, but we had a good car,” cited Smith. “We were picking our way up there early before the tire game came into play a little bit. We are real happy with it.”

Smith was involved in a crash on lap 39 which saw him get together with his teammate Billy Decker. Decker got crossed up in front of him causing him to spin. Smith had nowhere to go and piled in as did several other cars.

“I was glad there was another guy behind us so it wasn’t just Billy and I because that would have been embarrassing,” joked Smith. “I don’t know what happened to him. I haven’t seen him yet. He got sideways. I was starting to get through it, but you are coming off the corner you are going to get whacked.”

Matt Sheppard made strong drive from last in his heat race to fourth putting him in a consolation. He dominated that event before starting 20th in the feature field. He made his way to the top ten before pulling in with mechanical issues…

Tommy Meier dropped out of the event while also running in the top ten. Meier lost power steering on his No. 3 machine…

Anthony Perrego had a strong effort going before getting collected in the Ricci spin. Perrego’s No. 44 got over on his lid. He was not injured in the crash…

Ric Hill returned to action at the Orange County Fair Speedway for Eastern States Weekend. The veteran driver was unable to finish as he stopped to bring out a caution on lap 30…

Allison Ricci had a top ten finish locked up when a huge plume of smoke billowed out of the back of her car. She brought out the caution on lap 48…

Billy Decker and Jerry Higbie were both light on the scales after top five finishes. It is plausible to assume they ran short on fuel which caused them to not make weight. With all the late cautions for tires and courtesy laps being given, the field ran multiple laps under yellow…

The Short Track Super Series South Region is back in action next weekend at the Georgetown Speedway for Mid-Atlantic Championship weekend where that’s region’s champion will be crowned.

Jeff Withey contributed to this report.