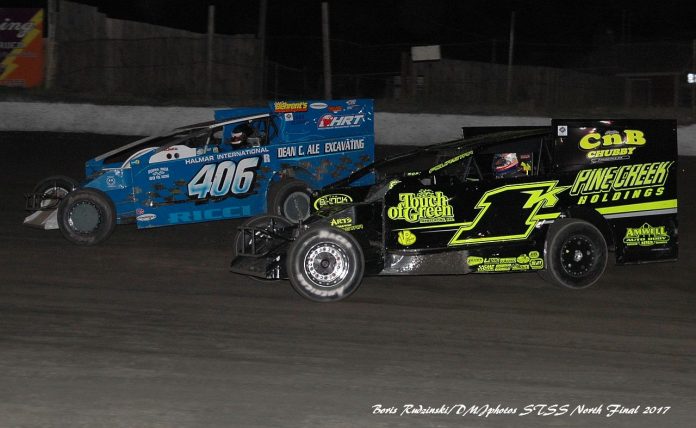 MIDDLETOWN, NY – In what turned out to be a battle of survival in the 50-lap Hard Clay Finale at the Orange County Fair Speedway. Hellertown, Pa., driver Rick Laubach survived the battle and the high attrition rate to bring home a solid third place finish.

For the driver known as the “Quaker Shaker,” Laubach battled back from a flat tire midway through the race just like many of his competitors to bring home a solid finish aboard the Ryan Kerr #1K Bicknell chassis.

Missing the redraw by one spot in his qualifying heat race, Laubach started the 50-lap feature in the 13th position. When the race started, Laubach was concerned how the race was going to play out tire wise on Orange County’s hard surface and tried to take it easy on his tires early on.

“I love coming up here to Middletown and I pretty much knew the American Racer tires probably weren’t the right tire for this track.  I tried to take it easy the first half of the race and save my tires and I still got a flat tire I think about halfway.”

Before his right rear went down, Laubach was running a steady race but was having trouble passing cars and really wasn’t sure about how his car was going to handle early on. But after the pit stop for the new tire Laubach’s car came alive.

“Yeah, before the flat I really wasn’t going anywhere and was just looking to hang on and see how the race was going to play out. Once we put the new right rear tire on, man this car came alive and I was able to get up on the wheel and do some charging. I thought there at the end we were just as fast as Friesen and Bachetti but not fast enough to pass them.”

When I was talking to Laubach, he mentioned that this was his kind of race and I asked him what he meant by that.

“This is the kind of racing that I feel that you have to use your head while you’re driving and it’s not just hammer down put it up on the cushion racing. It’s very methodical racing. It might be boring for the fans but as a driver it’s really intense out there.”

With a well needed podium finish for the Kerr team, Laubach is now looking forward to today’s qualifying session for the big-block Modifieds. Laubach will once again be behind the wheel of the Ryan Alsdorf No. 8a Bicknell chassis that he put on the outside pole at Oswego only two weeks ago.

Making only his fifth ever start in a big-block Modified, New Egypt regular Brandon Grosso impressed the crowd with his driving skills over the course of the 50-lap main-event. While not getting the finish they had hoped for after having to pit for a new right rear tire while leading and then running out of fuel with only two laps to go the ARCA bound driver let everyone their know that he has the talent to run up front with the stars of our sport.

After an impressive heat race run that earned the talented Grosso a redraw spot for the feature, the N.J., driver redrew the second starting spot for the main. With the likes of Andy Bachetti, Stewart Friesen, Ryan Godown and Mike Mahaney all starting around him, you probably would’ve thought that Grosso was out of his element against those caliber of drivers, especially on a track he doesn’t’ have much experience on. But when the green flag dropped, Grosso was able to hang with leaders and although he dropped back some to the seventh position he knew he had a good enough car to get back to the front if given the opportunity.

That opportunity came when a lap 29 caution brought the field back together and on the restart Grosso made it know he was here to race and not just learn. When the green flag came back out Grosso made a bold move when he saw an opening and vaulted from the seventh to third.

“Early on in the race I wanted to save my tires and didn’t really want to push the car too much and some of them got by me. I knew I had a good car and just wanted to take my time. On the restart the third place car sort of pushed up track and everyone went up with him.  My car was really good on the bottom and I was able to take advantage of it and get up to third.”

When the leaders in front of him all had to pit for tires, Grosso found himself in the lead with some heavy hitters right behind. The young driver never wavered and was able to keep the lead until he suffered the same fate as the previous leaders getting a right rear flat tire.

“Man that really sucked to have to get a flat while leading. I was heartbroken after that. I thought I had a good enough car to keep the lead but I pretty much knew the tire wasn’t going to last. I could start to feel it going away. After getting the flat and putting on the new tire I thought I could still get back up there for a good finish but then we ran out of fuel. We still ended up finishing tenth after Decker and Higbie were light on the scales, but it’s very disappointing especially after having the lead like that.”

After it was all said and done, Grosso had nothing to hang his head over and although disappointed with the outcome was already looking forward to Saturday’s All-Star Cup race at New Egypt.

“It was a good race for us tonight. This motor that is in this car is from 2006 and we bought it for $10,000 and to run with these guys and their 40K, 50K motors is a really good for our team. We have a race Saturday at New Egypt and I think we really have a good chance to get a win there.”

After dominating the Sportsman division last season you knew Grosso had the talent to succeed in the Modfieds and although he has been shut out of victory lane so far this season the future is bright for the young man. Although the deal is not quite completed yet, all indications are that Grosso will be driving full-time on the ARCA circuit next season for Ken Schrader Racing. With Grosso’s talent and Schrader’s guidance the future is definitely bright for young driver.