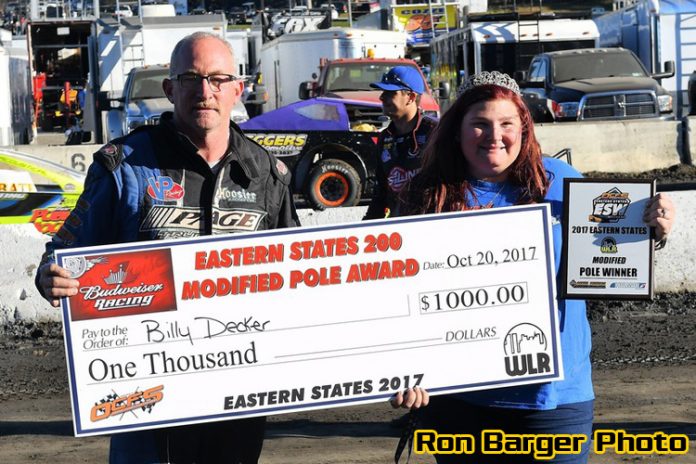 Decker turned in a lap time of 20.428 late in the time trial session to put himself into the number one spot. The 1998 Eastern States 200 winner was pleased with the Jeremy Smith owned Bicknell. They made all the right decisions which led to the $1,000 fast-time award.

“It’s comforting to get locked in,” commented Decker. “This Smith Site Development car is really good. The fact is we were good when we unloaded and that makes it a lot easier. We made a couple of fine tune adjustments and they made a decision on stagger and where to put the race car. It was really good. I’m very happy.”

Locking in is always a bonus, but it doesn’t guarantee Sunday afternoon success. They’ll have to be vigilant as they not only watch the racing surface but also keep track of the competition and their strategies. Decker knows that all bets are off on Sunday.

“It’s going to be relative to the abrasiveness of the race track and the speed of the race,” he said. “We are going to have a good starting spot. Sometimes that can be, not knowing what your competitors are doing at the same time, it can weigh on what you do. Sunday is going to be a crap shoot. It’s just going to be how the race unfolds, what traffic is like and what the race track is like. That will be what wins it.”

Starting alongside Decker on the front row is part-time Modified and Sprint Car driver Billy VanInwegen. The Sparrowbush, N.Y., driver debuted a brand new Teo Pro Car on Friday which helped propel him to a solid lap.  It was good enough to earn him the outside of the front row.

“Now we can focus on the race,” cited VanInwegen. “This is probably my fifth or sixth 200. We’ve been getting better and better at it each year and we finally put all the pieces together. I have to thank Joey Barbagallo and Rob Sherlock. They built me a hell of a race car. This is the nicest car I’ve ever had. It was expected. There was a lot of pressure going into time trials because I knew it was that good.”

Being on the front row is special for VanInwegen as he’s been a life-long supporter of Eastern States as both a fan and now a driver. This year things finally all lined up as he secured a late time trial lap.

“This is unbelievable,” stated VanInwegen. “I’ve been coming here watching this race since I was five-years-old. I never thought I’d be able to run Modifieds. This is pretty bad ass.”

VanInwegen also thanked long-time support Danny Markle who gave the team the Precision Racing Engine to use for the weekend.

The rest of the starting field for Sunday’s event looks like this:

Spots 33-44 to be determined by consolation events on Sunday.