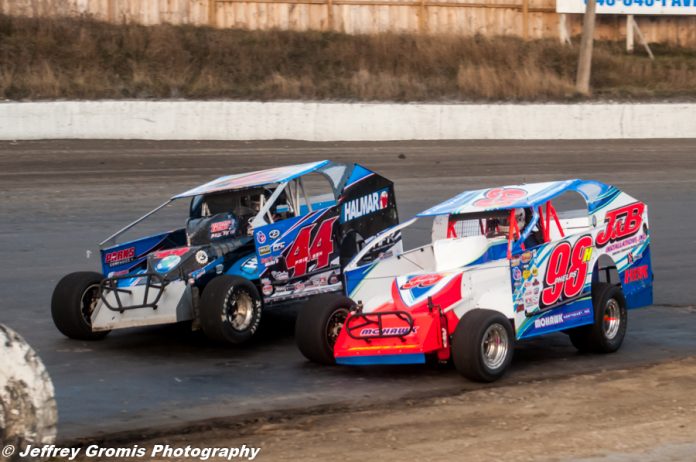 By MIKE MALLETT and JEFF WITHEY

Stewart Friesen came up short in his quest to capture the Eastern States 200 for the second year in a row.  He also lost out on the $35,000 payday plus the $10,000 bonus for sweeping the weekend. Unlike last year, Friesen didn’t have enough in the final laps to track down eventual winner Hearn, even after multiple restarts.

Friesen walked out of Eastern States Weekend nearly $36,000 richer after winning the Short Track Super Series Hard Clay Finale, grabbing the Eastern States 100 for the 358-Modifieds and his runner-up effort in the 200.

“He was good and he hit it on the money,” Friesen said complimenting Hearn. “We were really, really strong early but when we took the tires we missed it little bit. It kind of went away. It was close. We were able to race back up through. We had a great car and had a great weekend. We aren’t super happy with it, but it’s not bad either. It would have been pretty cool to sweep it.”

Friesen wasn’t sure what he was lacking late in the race, but something happened to the car after he pitted on lap 120. He just didn’t have the same feeling that he had earlier when he dominated the first half of the feature.


“I don’t know where we missed it,” stated Friesen. “I think a bar settled or something. It went away. We started hanging on the right rear pretty bad. We worked hard all weekend to keep it flat and driving straight. It just went away on us a little bit. We’ll go back to work on it and try to get it better for next time.”

Jimmy Phelps hasn’t had the best of luck in the Eastern States 200. He’s had some good runs go by the wayside late with flat tires or crashes. Sunday everything actually worked out for the Baldwinsville, N.Y., driver as he came across the line in fourth.

“It’s actually really nice for a couple of reasons,” commented Phelps about his top five. “We need this car in a couple of weeks for Charlotte and I’m glad we didn’t tear it up. It seems like we’ve got torn up here quite a bit. All-in-all it was a good day. We had a decent qualifying effort after we struggled right off bat. We won a heat and kept getting better from there. I’m proud of the guys for that.”

Phelps was good early advancing from 14th into the top five. He made his pit stop on lap 62. He raced back up into the top five. From there he settled into a battle for third with Mike Mahaney. The pair were inseparable as they swapped the third spot multiple times. It depended mostly on who restarted in what lane.

“We were good at the beginning and drove our way up there and got some track position,” cited Phelps. “We really didn’t make any changes all day. We put tires on it and at that point we were just trying to conserve. Maybe we took them a little early, I don’t know. We were out of right rear at the end. We were fortunate it didn’t blow. Me and Mahaney were pretty similar out there. It seemed like whoever got the better restart popped out ahead. A third or fourth place car is what we were so we are pretty happy with it.”

Matt Sheppard ended his day in the fifth spot. The Waterloo, N.Y., driver ran near the front of the field before coming down pit road on lap 110 to make his mandatory stop. He had “It was cut down,” cited Sheppard. “It had a lot of tread. We didn’t take a tire until after 100. I was surprised we got to fifth after getting a flat that late and having to charge back up through the field. I think we would have been in the mix there. We had made it all the way back up to fifth or sixth with 40 to go. We had some fresher tires than some guys. We would have been right in the mix.”

Ryan Godown put all the pieces together on Sunday for a terrific if not epic run in the Dieter Schmidt owned Lincoln Auto Body No. 5 Teo.  He came from 42nd to seventh.  After suffering two flats and still staying on the lead lap and having things fall his way, Godown found himself with a seventh place finish and the hard charger award.

“We unloaded off the truck and we were off and then it snowballed. We didn’t time trial good as the track got faster, then we missed out in the heat race. It’s been an eventful day. After Oswego this is a redemption kind of day,” said Godown. “We are already making plans for next year. Maybe Florida in February.”…

Billy Pauch Jr. made his first ever start in the Eastern States 200. It didn’t go his way. Billy crashed out on lap 176 when he slid into the turn one wall with the right side of his car ending his day early. His dad, Billy Pauch Sr., was on hand during the weekend to give advice and be there for moral support to his son who is coming off his first track championship at New Egypt Speedway. much the same schedule.

“We won 12 races this year,” said Pauch Jr. “I’d like to race some more in 18 and get some more wins. We had so many rain outs this year it really cut into the number of events we entered.”…

Billy Pauch Sr. will be putting together a new car for 2018. He has no plans as of now or a set schedule. He prefers to drop in when feels like it.

“I have a new car I’m building for next year,” he said. “The car I had this year was kind of an experiment. Every corner was different. I’ll pick and choose where I go, no set schedule.”

When asked if he would have liked to race in the 200 today Pauch Sr. said “I don’t like to race in these multi-day events. I like to show up race and go home. Here your here for a couple of days and then if you have trouble on Sunday it makes for a disappointing day.”…

More Work to be Done for Madsen Motorsports

Even though Brett won the 200, his car owner Brian Madsen said, “There’s still a lot of work to be done for next year. This is a good team builder, morale booster and it helps going into the winter with a big payday like this but it doesn’t change where we stand with our program for 2018.”

Previously Madsen said that there was going to be a “tag sale” of a large swath of items from the Hearn stable. Cars, parts and accessories…

Early Problems for the Doctor

Danny Johnson had trouble just nine laps into the feature and went down six laps with suspension issues on the Shakleton Napa Auto Parts Bicknell entry. According to his crew chief Chris Generalli, “Our Saturday night home is probably going to be Fonda in 2018. They have come in and helped big time. We could use some more help with tires and fuel. Heck, I’d even have Danny race here at Middletown weekly if someone would step up to help with the tire and fuel bills weekly.”

Gary Balough was on hand along with his famous “Batmobile.” He paced the field for the start of the 200 with the car he made famous in 1980 at Syracuse…

This year marked his 35th consecutive start in the 200 for Kenny Tremont. His day ended with a right rear flat with five laps to go and a 13th place finish.  It is likely the last race of the season for Tremont as he won’t be heading to Charlotte.

“We just need to regroup and work on some things for next year,” said Tremont before the 200 started…

Rick Laubach will also not be going to Charlotte.

“I’ve got a lot of work coming in for next year that I need to start working on and it’s a money thing so we will probably be at Georgetown next week and certainly Bridgeport for the Wild Card season finale.”…

Tyler Dippel had a tough day. Dippel brought out multiple cautions during the main-event for flat tires before something finally let go in the rear suspension on lap 189…

On lap 139 Brian Krummel had something lock up in the front-end of his Zubi’s Racing No. 17z. His car turned hard right coming off of turn four before stopping just short of the wall on the inside of the speedway. Luckily everyone was able to sneak by without making contact…

Jimmy Horton had a tough day which ended when he broke the suspension in the right rear of his No. 43 machine on lap 40. Horton did receive the Tom Avenengo Memorial Award worth $1,900. Horton was running in the 19th position on lap 19…

Local driver Mike Kolka was the first driver out of the 200 on Sunday. Kolka’s car shut off on lap two in turn four bringing out the first caution of the event…

Unofficially the race was slowed 24 times for caution on the racing surface.