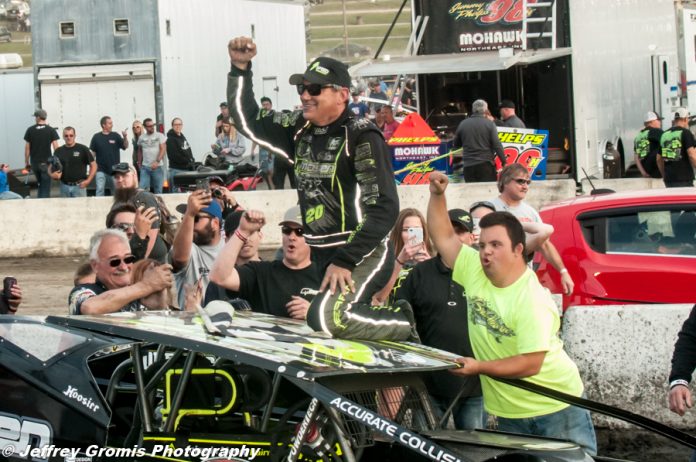 Last year Brett Hearn lost the Eastern States 200 on the final lap as his right rear tire went south allowing Stewart Friesen to drive underneath him in turns three and four for the win. Not this year.

Hearn made sure that scenario was not repeated in the 56th running of the event on Sunday afternoon.  Hearn used his typical strategy, he pitted earlier than everyone else.  He then made sure to take care of his D500 Hoosier tire in order to ensure it would go the distance.  It did for his 12th career Eastern States 200 win.

“The difference between last year and this year is I could tell with about 12 to go that I was losing the tire and I was out,” stated Hearn. “As nervous as I was about the tire I could tell we still had speed. We turned some of our best laps when we had to with about 10 to go. That was encouraging. I knew we were in pretty good shape.”

Although he was one spot short on Saturday night of the weekend sweep and the $10,000 bonus for doing so, the $45,000 plus he took home was a nice pick me up after a less than stellar 2017 campaign for the Madsen Motorsports team. “It’s been a pretty lean summer outside of the Mr. DIRT (Track USA) race,” Hearn said. “It’s important for us to end on a high note. Coming here last night and almost winning that race we were so close to getting that bonus. One of these times I’m going to get that thing. A second last night and win a tonight is awesome.”

Unlike Friesen who finished second, Hearn pitted on lap 45 while other top runners waited longer to head down pit road. The tire wear was an issue all weekend long so Hearn took care of his the best he could while going longer on his than nearly everyone else in the top five.

It worked out indeed.