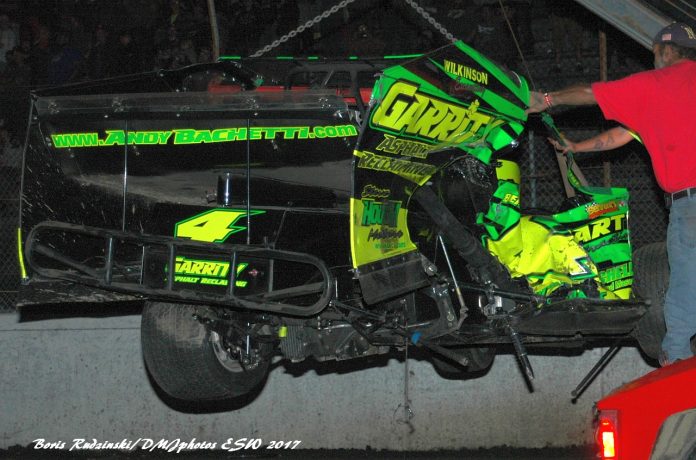 The Eastern States 100 lived up to the hype on Saturday afternoon as the race featured multiple passes for the lead, tire concerns and some late race drama. In the end it was Stewart Friesen finding a way by the Orange County Fair Speedway’s all-time winner Brett Hearn.

Hearn made one small mistake during the event that cost him the race, but for Hearn it was good to be back in his familiar position at the front of the field after the struggle in Central New York during Super DIRT Week.

“This is just a different deal,” commented Hearn after his second place run. “It is so much grippier than the other stuff we’ve been running on Upstate. This is really where our setups are. We just have to figure out what we are doing on the slicker stuff. We’ll be doing that over the winter.”

Hearn did give up the runner-up position briefly to Gary Edwards Jr. The pair made heavy contact on a lap 98 restart. Luckily for Hearn, the caution came out and gave him back the position. He let Edwards know under yellow that he wasn’t all that happy with the move used to make the pass.

“He planted me pretty good in the side and I had to get out of the gas for a second,” stated Hearn. “We were lucky that the yellow came right back out and we got the spot back. I wasn’t going to let that happen again.”

Hearn also discussed the tire wear situation in the post-race interview. He indicated that he doesn’t think it will be possible to go the entire distance on one tire as in year’s past.

“I think you are going to be seeing the same kind of race that you saw today,” he said. “I don’t think there is a tire that can go 200. You got to build your strategy around that.”

Another attempt was taken at the lap 98 restart which had Hearn and Friesen on the front row. Andy Bachetti and Edwards lined up in the second row. At the green the pair made contact as they both fought for the third position. Bachetti ended up nosing into the wall off of turn four and bouncing back into the middle of the track. Bachetti was tagged first by Tyler Boniface then received a hard lick from Danny Creeden.

Brad Horton was also involved as he went for a wild ride over the inside wall landing on pit road. His car did a spiral through the air before coming down on all fours on the opposite side of the wall. He was removed via two wreckers.

Yannick Mathieu and Brendan Finley were also involved in the crash. Luckily everyone was okay after the crash.

Tommy Meier was able to just sneak through the incident that took out the top contenders which put him in position to have an even better finish.

“I had a good view of it,” mentioned Meier. “When they come apart you don’t know where they are going to go. It was close when Andy (Bachetti) got together. He was coming back off wall by time I got through. It was close. I just got lucky.”

Edwards Scores Pole and a Fifth

Edwards didn’t want to see the caution once he got by Hearn. He was in prime position to challenge Friesen for a possible chance at the $15,000 payday.

“I did not want to see that caution,” commented Edwards. “I got by Brett on the restart. I thought we actually made a lap. I guess not. That put us back to third. It is what it is. I can’t complain. It was a good day.”

Edwards led several laps before heading down pit road to change a right rear tire. He didn’t think he could make it on one tire.  His strategy nearly paid off.

“I don’t know how these guys can make it on one right rear,” said Edwards. “I know I couldn’t. Our strategy was the first caution after lap 30 we were going to pit and take a new sneaker. It was rough coming up through traffic. All-in-all, it was good.”