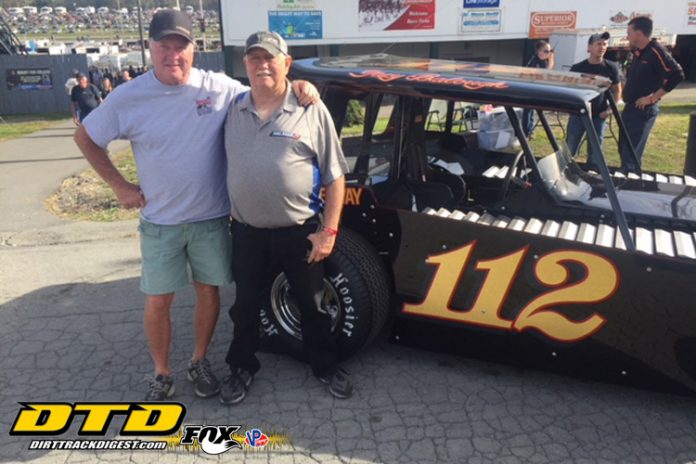 The trip to the 56th running of the Eastern States event has had many changes over the years. What started as a one day event has this year become four days long. On Thursday Brett Day held one of his traveling SSTS shows, something he has been doing now for nearly 10 years. The show brought out over 60 Modifieds with the win going to Stewart Friesen even though he suffered a flat tire about halfway through the event as did many others during the late stages of the 50-lap event.

When we arrived on Friday morning we found nearly 150 race cars including Modifieds and Sportsman. The day was filled with time trials, heats and B Mains leaving only a 50-lap Sportsman feature to be run as the final event of the day. The winner was Jesse Leiby. One of the best parts of going to this historic event is getting a chance to see many old friends that we may only get a chance to catch up with on this weekend. Saturday was dedicated to 358 Modifieds and the CRSA sprints. As we walked through the sprint pit area we learned that former Modified drive Jeff Trombley was leading the points for the club out of the Capital District of New York State. When he left Modified racing Jeff teamed up with his friend, sprint owner and former driver Warren Alexson who has his shop just down the road from our home. Jeff finished third in the sprint feature which was enough for him to hold onto the point lead and give him his first sprint car title.

During one of the breaks in the show we found multi-time Super DIRT Week winner Gary Balough. Gary was standing with what is known by many as the “Batmobile” the No. 112 that won the 1980 SDW Modified event by a large margin. Gary had drawn a crowd of race fans looking to get a photo with Gary and the historical car.

Among the crowd was former Lebanon Valley Champion, Dickie Larkin who remembered the famous run by the No. 112 at the NYS Fairgrounds and said, “Gary could have put the whole field down two laps if he wanted to.”

Larkin was in the field that was smoked by Balough on the day that changed Modified racing and SDW forever. We spoke with Gary about the car and he said they have been very busy getting it back in race ready condition.

Gary is also waiting for his book to be completed and said it covers everything. “I lived it,” said Gary.  “and that’s what we be in the book.” Gary paced the 200 on Sunday with the restored “Batmobile”.

We also spoke with one half of the promoting team at Orange County, Howie Commander who said of the recent Ronnie Johnson announcement, he is ready to welcome Ronnie to the high banks.

The Saturday 358-Modified 100-lap event had a certain local flare for us because the winner was Spraker, N. Y.’s Stewart Friesen. Friesen took home $15,000. Finishing second on Saturday was Orange County’s most winning driver, Brett Hearn. On Sunday the top two finishers reversed order as Brett Hearn was in victory lane for the 12th time in the Eastern States Weekend event. Friesen was second on Sunday.

We learned that on Saturday Matt Sheppard traveled to Outlaw Speedway where he chalked up one more win for his impressive season. He now has 40 wins this season. Matt has won 56% of the races he’s competed in this season and has finished in the top five 86% of the time. What Matt has done this season is more than impressive.

This past week Glen Ridge promoters, Mike Parillo and Ray Sefrin announced that they will give out $11,000 in point fund money to five divisions of regular weekly racers. Each division champion will be awarded $1000 plus a trophy and the remainder of the money will be given out to the second through fifth place in points in the five weekly divisions from Crate Modifieds to Sr. Slingshots.

When they took over at Glen Ridge Parillo and Sefrin looked for a way to come up with an incentive for racers and fans to come to their Sunday night track. They dropped the adult admission price to $8.00, $6.00 for seniors and committed to providing good and affordable food at the concession stands. For the racers they came up with an idea for a point fund, one that did not include the normal 50/50. They collected an extra $10 each week from drivers at the pit gate which the track matched. In a short ten weeks of points they accumulated $11,000. And this is all minus any contribution from the 50/50 or sponsors. The weekly 50/50 was divided between fans and drivers each week. The driver finishing in the position drawn at the end of the feature in a pre-determined division of the night was awarded half of the 50/50 money. The other half was taken home by a lucky fan.
With this season winding down for the two new promoters they are currently setting up next years schedule. Plans are to begin racing on Sunday, April 8, 2018 with an open practice session. They will add Street Stocks to the weekly racing card.

As soon as the gate closes on the 2017 season on October 28th both Parillo and Sefrin will begin work on the facility. One of the first things will be bringing in new clay and working on improving the buildings on the site. Both promoters feel that they had a successful first season and look forward to bringing more improvements to the popular oval. Imagine what this team will do next.

Our next racing event is this Saturday, October 28th at Glen Ridge and then the off season events begin and our first event in the off season is the DIRTcar Champions Banquet.