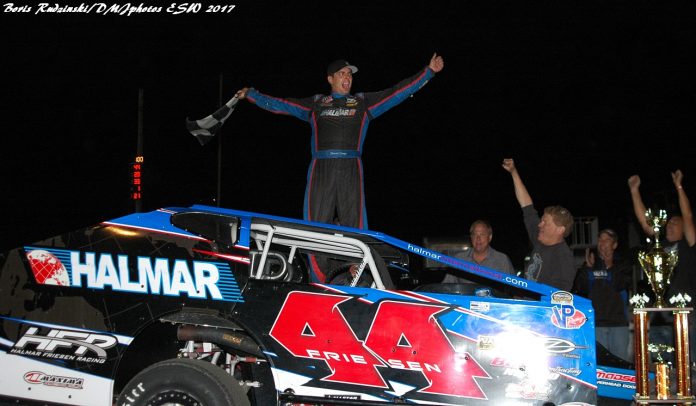 Stewart Friesen and his Halmar Friesen Racing Team continued their hot streak on Saturday at the “Legendary House of Power” by winning the 358-small block modified portion of the weekend.

Friesen’s weekend started by winning $5000 on Thursday night in the Hard Clay Finale as part of Brett Deyo’s Short Track Super Series North region finale. Friesen added another $15,000 to the team’s coffers after winning the big race on Saturday.

Starting from the sixth spot Friesen took it easy early on and moved up slowly and by lap 24 had moved up to the third spot behind leader and pole-sitter Gary Edwards Jr. and Brett Hearn. After Edwards decided to pit on lap 41 for some fresh right rear rubber, Friesen was now up the to runner-up spot behind Hearn.

Friesen was content to run behind Hearn for a while to keep his tires as fresh as possible just waiting for an opportunity to get around the leader. Friesen’s patience paid off as he grabbed the lead from the speedway’s all-time leading winner Brett Hearn on lap 64 when Hearn slid up the track a little and was never headed after that. Hearn was able to stay close to Friesen over the last 36 but was never able to really mount a serious challenge after that.


“We sort of snuck up on Brett there, he was super-fast and I was just trying to pace him there. He was keeping it his car straight and square but he was leaving me a hole open on the bottom and the one lap he seemed to slip up a little higher and we were able to get underneath of him and cross him before he was able to get back to me.”

After all of the tire issues that cropped up in Thursday’s Short Track Super Series race and the 50 lap Sportsman race on Friday. The thoughts of the crews along with all the talk coming into Saturday’s 100 lap small-block race was about tires and how many right rear tires it would take to get through the full distance. While there were a few tire issues and some teams did elect to change tires during the race, both the winner Friesen and the runner-up Hearn both went the full race on a single set of tires.

“I know everyone was talking about the tires but to be honest we were never that concerned about it. I knew the car was tight and flat enough so we didn’t have to slide the right rear too much so that was good. You know I have followed Brett around here for probably 1000 laps over the years and he is the best at keeping his car flat and tight and that is what we tried to do with our set-up. Racing here last year definitely helped us dial it in for this weekend and we back and looked at our notes from last year and applied to the car for this year.”

Friesen went on to explain that he thought as the weekend went on the tire wear would actually get better.

“The track started out pretty green on Thursday especially with the heat. It’s been unseasonably warm this weekend and that just kills the tires but as the weekend rolls on and the track starts to take rubber some that abrasiveness starts to go away. It’s almost the same thing as what happens on the pavement tracks. As the track rubbers in the tire wear gets better and you just have to have a balanced race car to go along with it.”