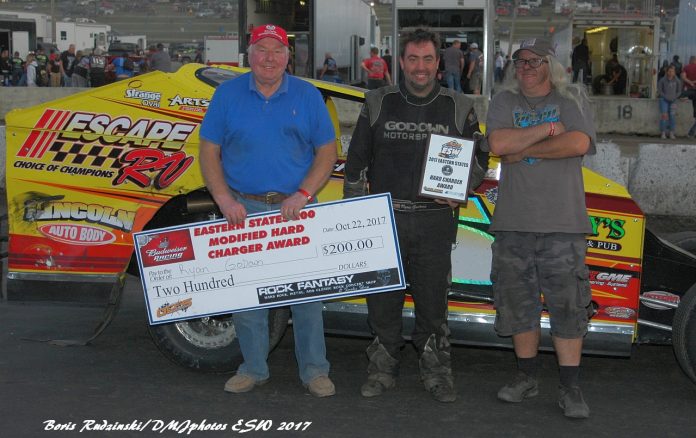 Ryan Godown has not had what he would call a great season so far in 2017 and this weekend’s endeavors seemed to have kept going along on those same lines until yesterday’s Eastern States 200.

Godown’s racing weekend began at Orange County Fair Speedway on Thursday night with the running of the STSS Hard Clay Finale.  After qualifying for the main-event, the team was forced to pull out of the race after blowing a tire around halfway through the 50-lap race.

Friday’s qualifying for the 200 brought more anxiety and heartbreak. After drawing an early spot for time trials, Godown knew he was in trouble before he even went out as he knew the track would pick up speed as the day went on. Godown’s theory proved to be correct as he was only able to time trial 42nd fasted out of the 66 cars that took time meaning Godown would have to have a good race in his heat to qualify for the main-event.

In his heat race Godown made a great move early on to move into a qualified spot only to have it all go away when he came together with the car of Mike Maresca a lap later which ended up with Godown spinning out. Forced to start at the rear of the field on a track that was hard to pass on, Godown didn’t qualify which meant he would have to race his way in through one of Sunday’s three consolation events.

Saturday was just as bad for the Ringoes, N.J., driver as he headed home to the New Egypt Speedway. Driving a new Bicknell chassis for the Petruska and Son’s/Atlas Paving team. The team ended up scratching for the night after qualifying in their heat race after the team’s brand-new Dodge 358 spec motor lost oil pressure as they came to the checkered flag.

Sunday he was back up at Orange County Fair Speedway and it proved to be a much better day for Godown and the Escape RV/Lincoln Auto Body #5 team as they were able to qualify for the 200 with a solid finish in the first modified consolation race. With nothing to lose the team knew that if they could stay out of trouble and avoid being lapped early they might possibly be able to get a good finish after 200 laps.

Although the race didn’t quite go as planned, Godown and his team were able to finish the 200-lap race in the seventh spot earning them the Hard Charger of the Race award. Godown talked about his race and how it went.

“Our day ended up pretty good. The car was pretty good, we were able to keep it going to the front early and I thought I pitted at a pretty good time and changed the right rear tire. After our pit stop we were riding along nicely and then I seen some other guys come in and after that I could start feeling our right rear tire starting to go and that is when Sheppard got me along with Decker.”

Normally having to change two tires in a race is not a good thing and you hope you don’t ever have to but today it proved to be the thing that propelled Godown to his top ten finish.

“I knew it wasn’t going to last much longer and I was just waiting for a caution to come out to come to the pits and change it, but unfortunately it was me that brought out the caution when it blew. But looking back on it, it was probably the best time it could’ve blew. With a fresh tire I knew I could be a little rough on it to get back to where we got. I thought I might’ve been able to get even a couple of more spots but I kept having to start the restarts on the bottom and I kept getting pinned down. If I could’ve started a couple of those restarts on the top I think I might’ve been able to get into the top five.”

As well as Godown’s season has gone lately especially this weekend along, the Ringoes, N.J., driver was happy to get what he got yesterday and be able to roll the No. 5 Teo Chassis back into the hauler in one piece unlike what happened at Oswego.

“At the end of the day with what happened at Oswego and here earlier in the week this is a win, win for us. I really want to thank Dieter (Schmidt) for giving me this opportunity because without him I wouldn’t be here. Hey, it’s probably been ten years since I’ve raced in this race and to have a good run for Dieter and for Escape RV is all I can ask for.  They are the ones that make is all possible. To finish seventh and win the hard charger award is a good thing for our team.”