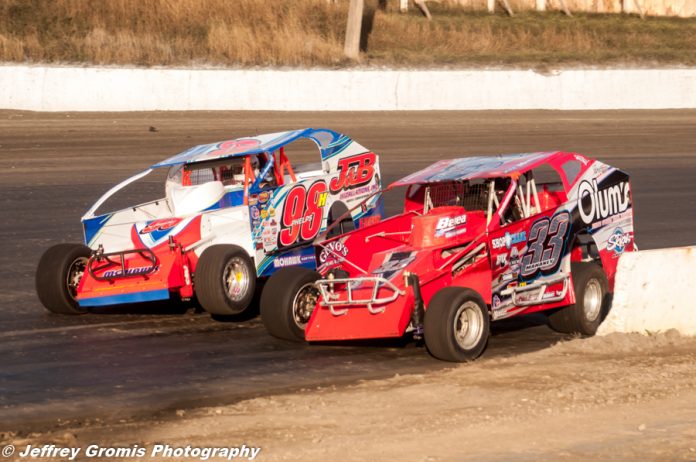 After struggling through the early portions of the 2017 season, Mike Mahaney has been strong as of late.  He secured a well deserved third place finish in this year running of the Eastern States 200.

Sunday’s 200 lap affair was the third time the King’s Ferry, N.Y., driver has competed in the storied event. Until this year’s third place run, the best finish Mahaney had was a fourth.

While Mahaney ran his usual ride, the Buzz Chew #88 in Thursday’s STSS race and in the small-block race, he was forced to bring out his family owned #33 to compete in the big block portion of the weekend so the Buzz Chew team could get their big-block car ready for the World Finals in Charlotte, N.C., which is only two weeks away.

“This was awesome, I am ecstatic! Two years ago, we finished fourth here the first time we ran this race. To be able to one up that and really, we were right there with Brett on one of those starts, we just didn’t have enough smoke under the hood to stay with him but we’ll come back with more the next time.  I really think we can win this thing. Hat’s off to my crew for a fantastic pit stop.  They did everything right and kept me out there and in position to be in contention there at the end.”

With not having his usual ride available for use and really wanting to compete in the 200-lap big-block race, Mahaney was forced to bring the family owned #33 out of the garage and you could tell by the look on his face after that race that he was certainly proud of what him and his father accomplished with their third-place finish.

“I am so happy we were able to do this today with this car. The car we used is a 2013 Troyer TD1 chassis with a 15-year-old 23 degree headed Enders motor. My comment before about needing more power was not directed at all at Enders, he builds phenomenal motors. It’s just a cheaper deal, it’s not the best motor he could’ve built but it’s what we could afford.”

Mahaney’s day did not come without some troubles as the car lost power steering at some point and he had to man handle the car for most of the race.

“Man, I couldn’t be any happier, to do this with our car and my dad spotting for me is just awesome. I have to thank Olum’s for sponsoring us for this weekend and for everyone else that supports us. We had a lot of help this week. We didn’t have any luck on both Thursday and Saturday getting involved in wrecks both days. But today we kept her in one piece and that is a testament to having radios.  They really help guide you and keep you out of trouble.”

As happy as Mahaney was with his third-place finish, what made it even better was having his dad work with him and being able to share the glory in victory lane with his father, former racer Jim Mahaney who served as his son’s spotter during the race. The elder Mahaney happened to be spotting for his son a few rows behind where we were sitting and could be heard hooting and hollering after the race as he descended his way down the stands to greet his son in victory lane. It was a truly special father and son moment for sure.

“It feels really good to have him spotting for me and being able to share in this. I had to calm him down on the radio the one time there. I missed a wreck when I should’ve creamed the guy and probably totaled the car.  I missed it because he steered me through it and he got so excited I got through I had to tell him to calm down, but he really did a great job along with everyone else on our team.”

I had a chance to talk to Mike’s father after I finished my interview with Mike and he was so excited for his son’s good run that he could hardly contain his enthusiasm.

“I am a very happy man right now. To see Mike be able to save the right rear tire like he did and how he did such a nice job of driving the car is just awesome! This is one of our old cars in our fleet along with an old motor so to finish is the top three is unbelievably awesome. Mike just keeps getting better as a driver all the time and I couldn’t be more proud of him right now.”