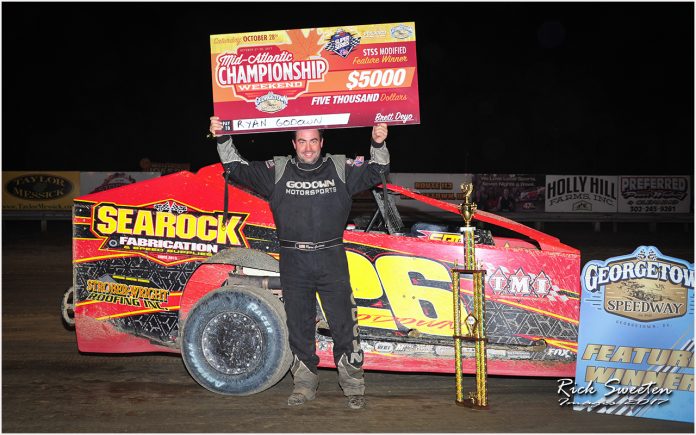 It was a vintage race on Saturday night for Ryan Godown and to make it happen the Ringoes, N.J., driver turned to one of his old trusted Troyer cars to the job done.

When the Godown left their shop on Friday the plan was to run the old Troyer car in the small-block portion of the weekend and then run their #747 big-block in the STSS race. But on Friday night after warm-ups, Godown knew he had to change that plan and it worked to perfection for the “Ringoes Rocket” as he drove the car to a dominating race win in the 40 lap STSS South Region finale on Saturday night.

“Jared (Petruska) and I were talking about what car to bring here for this race and then we saw Charlotte was the week after and we didn’t want to take a chance on hurting the #66 for that race.  So I told him I had my big-block and my outlaw car so we’ll bring them. Jared said we might be better running the outlaw car but still we weren’t planning on it when we got here. We made some changes on it for warm-ups but it didn’t like the changes we made and it just wasn’t good out of the gate.”

Not having the car work for Godown the way he thought it should the decision was made to run the outlaw car in both divisions for the weekend. After watching Saturday night’s race, I think the team certainly made the right call.

“I told the crew that if we’re going to do anything tomorrow night we’re going to have use this car and take the chance. If we wreck in the small-block race, we’re just going to have to fix it and go from there. I thought it was the only chance we had to be competitive in the race tonight and thankfully it all worked out. The car worked great for us last night. I probably went with too hard of a tire and that might’ve cost us the race but we came on at the end and got second. This Troyer car has to be at least five to six years old and it just keeps going strong with this 358 ERD outlaw motor in it.  We’re going to run it until it dies.”

The race seemed to stall out on lap five as caution after caution kept coming out to keep the race from gaining any flow and on at least one of the restarts Johnson was able to surprise Godown and grab the lead away.  The field never completed the lap as the yellow came out giving Godown back the spot and on the next restart Godown was ready for Johnson.

“He surprised me a little and he jumped me by a half a car length there. On the next restart I sort of picked up my pace a little so he couldn’t get by me again. He had a big block in his car and that gave him a little jump on the restarts over my car.”

Godown hasn’t had a typical year for himself in 2017 as we have documented before. It looks like the season is finally starting to turn around for himself and his teams. Although a hard crash ended his afternoon in Oswego, Godown was happy with how the car ran. Fast forward to last Sunday at Middletown in the Eastern States 200, Godown and the Dieter Schmidt #5 finished a very respectable seventh earning him the hard charger award. This week at the Mid-Atlantic Championship the team finished with a second place run on Friday night in the small-block race and capped off there weekend with a win in the STSS race on Saturday night. With his win on Saturday Godown moved from fourth spot to finish second in the South Region standings for 2017.

I asked the New Jersey driver if he feels like the season has finally taken a turn for the better even though it is coming to an end.

“Listen, you know how racing goes and you are only as good as your last race. I feel like were finally turning the leaf over on getting all this garbage out of the way that we’ve dealt with all year. It’s been a lot of stupid stuff happening all year. You got the Petruska’s that give you everything you need to win and we did not have the year we wanted, but I can tell you it wasn’t from a lack of effort on their part or on our part.  They feel bad for me and I feel bad for them. It takes a lot of stuff to happen in racing to have a good year and it takes a lot of money to make that happen. Even with the Searock car we struggled and with all the rainouts this year it doesn’t give you a chance to work a lot of this stuff out.”

As I have found out through the last few years of doing this that confidence is a big part of doing well for a driver and if the confidence is not there the driver tends to struggle. Once they seem to get that all-important confidence back they start to feel good about themselves and get on a roll. With the Godown and the Petrusaka #66 team ready to head to Charlotte, NC for the World Finals this week getting his confidence back is making Godown look forward to heading south.

“I can tell you honestly that my confidence was in the dirt recently. My brother Butch has been with me through all of this and even his confidence in me wasn’t good. It’s been a very stressful time. I really have to thank my girlfriend Chelsea, she has been positive through all of this and has been the one to keep picking up and keeping me going. You know in racing you can just keep being beat down over and over and at some point, you wonder what is the breaking point. The Searock’s Steve and Diane have stayed behind me to through it all and I can’t tell you how happy I am for them tonight. The Petruska’s haven’t lost confidence in me and I can’t wait to get to Charlotte with them next week and hopefully be able to give that team a good run. It’s been great working with Dieter over the last month and even though we didn’t win last week he was ecstatic with our run in the 200.”
It’s been a different year in 2017 for Ryan Godown with not as many wins as he is used to and with no new track championship banners to hang in their shop but it has also been a learning experience and he hope to take that experience and keep it rolling along and finish out the 2017 on an even stronger note.
As always, I can reached at dirtracefan25@hotmail.com or on Twitter @dirtracefan25 for any questions or comments.