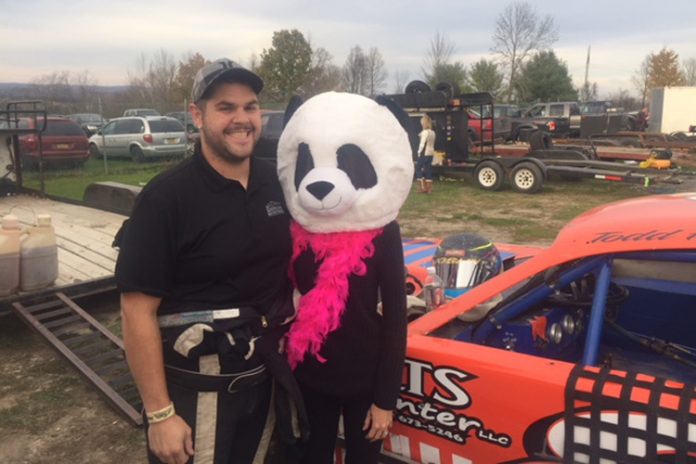 All good things must come to an end. The season ending curtain came down at one of our favorite places on Saturday. The evening at The Ridge was a racing event with a party atmosphere where both children and adults came dressed in their Halloween costumes. Prizes were awarded during intermission. In four short months the Glen Ridge Motorsports Park has turned out to be the place people want to attend. In talking with fans, pit crews and drivers alike the response is always very similar, they either like it or love it. Fonda Hall of Fame members, Alton and Carole Palmer came to just enjoy the night out on the hill, to talk with old friends and enjoy a beautiful night at the track. While the Palmer’s were there they gave Palmer team kid’s tee shirts to promoter, Mike Parillo to give to some of the night’s costume winners.

We also spotted Jackie Brown a former competitor at the track and on this night a spectator.

He said, “what a great race track,” referring to the track surface.

We also spoke with Danny Ballard, the Sling Shot winner the past two weeks. Ballard has been working with the promoters the past week, grading the track and will help out when the new clay is delivered. We ran into the Mark Mortensen race team. Mark was the winner of the Crate Modified event at the track the prior week, his first visit to the track for the season. He finished second this week behind Dave Constantino. The Mortensen team raved about the track surface and the friendliness of the track management team. This was just one of the teams that came to The Ridge, grabbed a checker and walked away very happy with things at the track this season. They are a welcome addition to the Crate Mods at Glen Ridge.

We found Ivan Joslin in the Todd Hoffman pit area preparing to sit behind the wheel of one of Todd Hoffman’s No. 8e. Ivan said he was thrilled to receive the call from Hoffman with the offer to drive. Joslin’s mount was already stripped down being prepared for next season. Ivan has become a fan favorite, and has several wins to his credit at local tracks. With the announcement last week that each champion at Glen Ridge would receive $1000 plus a trophy for their efforts we wanted to talk with a couple of the beneficiaries.

Four Cylinder champion, Chris Andrews of Middleburgh, NY said, “I was champion here last year and after running a full season, received a jacket and a trophy. It’s great to be treated as equal no matter what the division.” Next we spoke with Luke Horning. And after talking with Luke we say, don’t judge a book by it’s cover. It’s difficult for us to get to everyone at all the tracks we go to and we admit we had never really talked with Cousin Luke. Horning has a never give up attitude making him a hard charger wherever he goes. He puts a show on for all and we for one do not go to a race to see an Easter Parade. Luke puts much thought into his racing and has his opinion on many things that happen on and off the track. He’s very interesting and without a doubt someone who enjoys racing. He said he is glad to get the $1000 from the point fund and that second place will get more than most tracks pay their champions.

The racing time at Glen Ridge was moved up to 5:00 pm for Saturday’s events so that the show could be complete at a reasonable time for a special bonfire to end the evening. The racing ended at 8:05 pm and everyone moved to the pit area for the large bonfire with track personnel passing out cookies for all to enjoy.

All took time to say so long until next season with everyone looking forward to what the team of Parillo/Sefrin will bring to the popular track on the hill in Fultonville. We thank the management team for all their efforts in bringing this gem back to life.

Our next racing event will be the DIRTcar banquet in a few weeks in Syracuse. We always look forward to this because we get the chance to re-live the 2017 season and make plans for the 2018 season that begins in February in Florida.