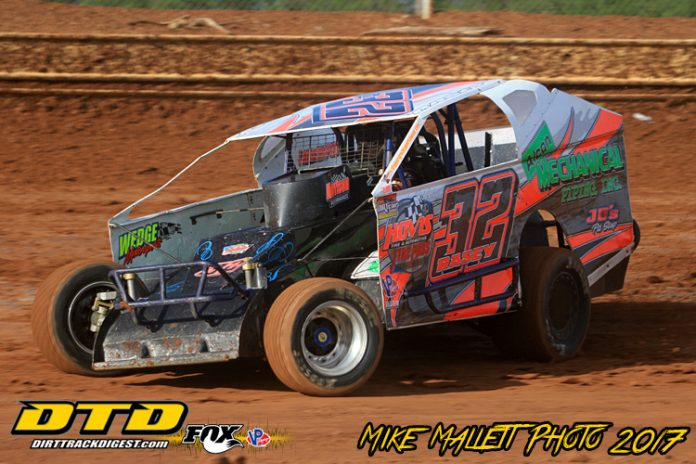 There were numerous familiar names in the big-block pits for this year’s edition of the World Finals at Charlotte.

However, there were also some unexpected surprises pit-side who aren’t common names for Northeast big-block fans.

Jim Rasey and his son Justin are vying for a starting position in the Modified portion of this weekend’s schedule.

Jim has been here before, but the former winner at Sharon, Tri-City, Lernerville and event a Late Model victory at Gaffney, South Carolina, hopes to do well in his return to the track.


Rasey has been involved in the sport since his start in 1996.

He said, “I ran a Late Model down south. I had a good sponsor who was based down there and I made the run from the Youngstown-Warren (Ohio) area every week. I ran with the Southern All Stars and the Carolina Clash.”

The 45-year-old works as a Byproduct foreman in a steel mill where they produce metallurgical coating for blast furnaces.

He is anxious to hit the track here at Charlotte.

Rasey said, “I am an old school driver and we build our own stuff. We are not big budget. I started in the big-blocks after the Late Models as I asked Rex King about it and he pointed me in the right direction.”

For a while he tried to jockey both divisions, but said, “It was just too difficult to do. We really don’t have the numbers of guys to do both cars. Maybe bouncing around between the two divisions hurt me in some ways as I never had enough time to focus on just one.”

However, he is in the BB right now and looking toward the weekend he said, “The first thing is to make the show. I think we have a fast car. When I ran against several of the Super DIRTcar Series drivers at Sharon in July I thought we did okay. I was running around 10th when a wheel spacer came loose and knocked us out of contention. I would like to be able to finish in the top ten here this weekend.”

Rasey is behind the wheel of a 2014 Troyer powered by a Morrison Performance power plant with major sponsorship from Alcon Mechanical Piping.

Jim brought along his 23-year-old son Justin for his introduction to racing at Charlotte.

He said, “The first time he saw the track was Friday morning. He is pretty new to big-block racing and ran six to eight times each of the past two years. I need to get him up to speed in this division and this will be a great experience for him.”

So fans who aren’t familiar with the Buckeye based team can keep an eye on 32 with Jim behind the wheel and one of the 21’s that Justin will be piloting.