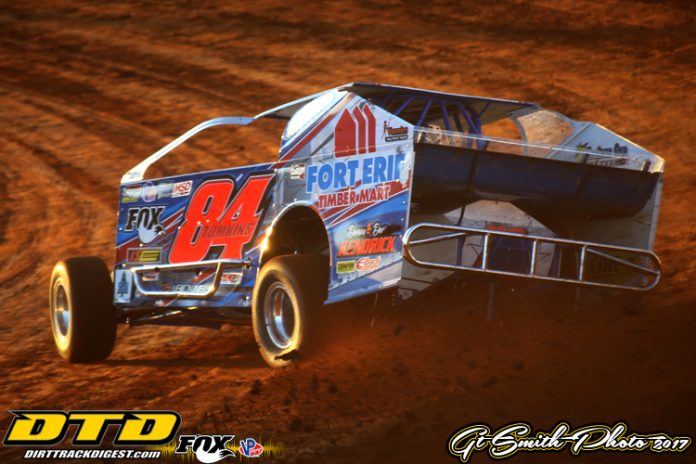 Gary Tomkins qualified for both Friday and Saturday nights’ features at the World Finals in his big-block Modified.

However, even though he earned starting spots they certainly didn’t come easily.

After time trials he was in pretty decent position in both of his heats. In the Friday segment he started fourth and finished there while in the Saturday qualifier he started third and finished fourth, but was towed from the track after parking it high in the first turn along the wall.

When asked by DirtTrackDigest.com about his night he said, “We lost the power steering in the middle of the first heat. It was bearable while racing, but trying to drive it back to our pit was brutal.”


Continuing he explained, “We ran out of time trying to replace the box because the hoses didn’t work. So we had to run the old box for the second heat. We tried just filling it up with power steering fluid and hoped it would last, but the power steering was gone by the time we hit the track for our heat.”

Things didn’t get better as Gary noted, “I decided I wasn’t going through the ordeal of trying to drive it on asphalt again so I had them tow me in.”

It didn’t end there as he continued, “Also the car wouldn’t start so in the midst of trying to get the power steering fixed we tried to replace the starter. For some reason it fell out at the beginning of the second heat race and rode on my left foot for half the race.”

In conclusion he said, “It was an interesting night for sure, but we are in both shows.”

It certainly won’t be a night Gary Tomkins will soon forget.