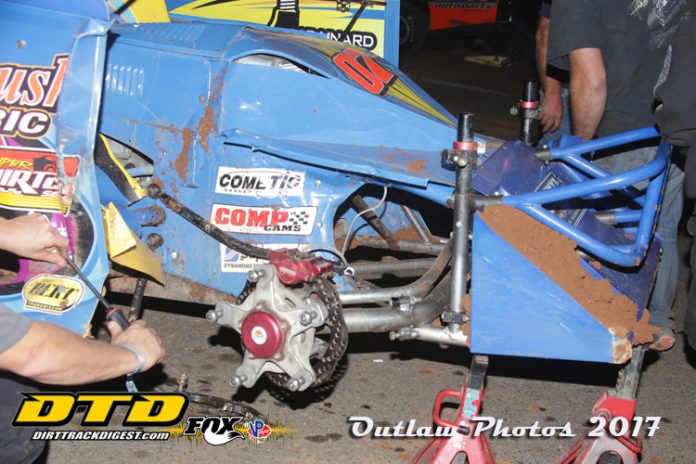 Picton, Ont., driver Tim Kerr thought his night had really turned around when he started outside of the front row in the Saturday qualifiers for the World Finals for the Super DIRTcar Series big-blocks.

But, unfortunately things just didn’t go his way at all.

After the first round of time trials and heats he was headed to the B-Main on Friday night and then he crashed with Tim Fuller as the pair drove through turns one and two in Saturday’s heat race.  He found himself in what appeared to be a weekend ending crash as the car was junk.

Tim said, “I’ve never had a problem with Tim Fuller in the past so I will brush it off.”

As the team looked over the car on Thursday night it was evident that the front axle was gone, there was a need for a fan, radiator and some frame straightening.

Kerr said, “We arrived on Friday morning to look it over, but there was much more damage. There was damage to the oil tank, a hub, radius rods and torsion bards. It sucks, but it is what it is.”

He continued, “We needed the porto power on the rear clip and Larry Wight came over and did a bunch of welding for me. Not only was my crew working, but half of Pat Ward’s crew also helped me get this back together. I really couldn’t make it through the season without the help of the Wight family as they have really helped me out and let me work on my car in their shop when I am down here for the weekend.”

Well, many teams would have given up, but this paid off.

In the B-Main for the Friday night show he survived a few yellow flags and eked out the win over Brett Hearn to qualify him for the Modified main event.

Good things happen to good people and on Thursday night those good things were absent, but with the teamwork and other teams in the pits rallying around him he was able to get in to the feature.