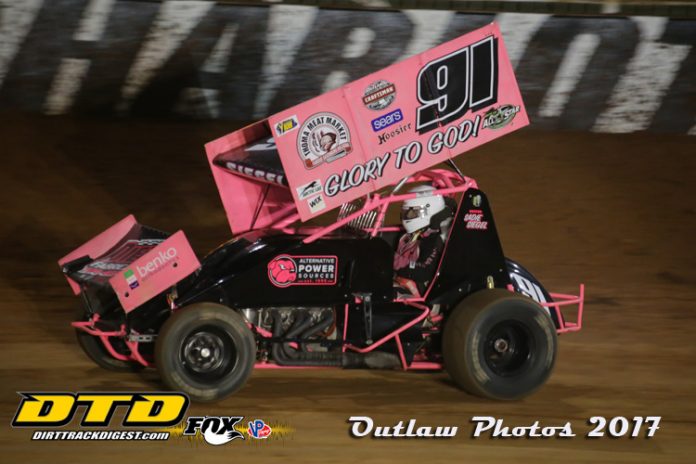 “I wanted to be known as the girl who ran decent and not the girl that went flying into the cement wall,’” said Sprint car driver Sadie Siegel as she stood just inside of her trailer on Saturday afternoon.

Siegel, a 17-year-old 410 rookie who ran this season at the Lernerville Speedway, has been attending as a World Finals fan for years, but this weekend she came to Charlotte in a new role…as a driver.

She said, “When I got out there on the track on Thursday night honestly it was overwhelming. I was living my dream. I couldn’t stop smiling as I drove around the track.”

Her goal was not to win, to finish in the top ten or even to qualify. Sadie explained, “The first time I got behind the wheel of a 410 at Lernerville I was six seconds slower than the fastest car. So when I decided to come here I just wanted to be within 6 seconds of the fastest car.”

She easily accomplished her goal as she noted, “I was 1.5 seconds behind the fastest car.” Sadie was really looking forward to heat action on Friday night. The driver found herself making news, but not in the way she wanted.

Explaining what happened, she said, “Going into the first turn an issue developed. I don’t know if it was a steering box issue or dirty air off the other cars. I was turning left, but the car went right into the wall.”

Continuing she said, “I kept my eye open as I learned from other drivers that you want to turn off the fuel and engine. So while I was flipping it was reaching for the switch and nearly broke my arm. I came to a stop and saw fire. I don’t even like campfires so I got out as quickly as I could.”

The flip was definitely the most violent crash of the weekend and the new $600 racing helmet was cracked in the back as she noted, “My belts stretched and I went up and hit the roll cage a couple of times.”

She said, “My dad (Bob) is a former racer, but I was more worried about telling my mom who is in school in Maryland at the moment. She is a runner and races and doesn’t really think a Sprint Car and her little girl go well together.”

Sadie found up quickly about the racing community as when she returned from the hospital she saw something that really surprised her.

She explained, “I was so surprised by the fans response and when I saw my car there were probably half the Sprint car teams from Lernerville, who I didn’t even know were here, helping my dad and crew in getting things organized.”

Sadie is a promoter of helping others with her “Give Glory to God” movement for her Baptist church.

This weekend any donations that were received went to THON which supports children and families throughout the youngsters journey with cancer.

As fans stood in a line accepting pieces of the frame, signed by her, she smiled and was quite positive.

Asked why she was smiling she said, “About 20 minutes ago I learned that I was accepted at Clarion University into their nursing program.”

The team is ready to head home to Saxonburg, Pa., and in the back of the hauler won’t be a car, but a motor, bladder, half the body, the left front wheel and tire, the fire extinguisher and a rock screen.

The former 602 Stock car driver who has dreamed for years of being behind the wheel of a Sprint Car will start all over again.

With the help of Thoma Meat Market, Alternative Power Sources and Precise Racing she will be back.

It was a tough weekend, but her quest to follow her dream brought her to Charlotte this weekend and talking with her you have to think she will be back.