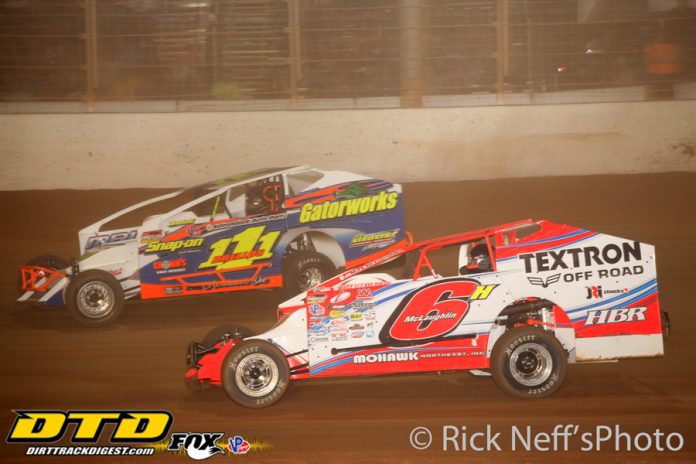 Twenty-year-old Demetrios Drellos made his first trip to the World Finals this year and it started out totally unexpected.

The Queensbury, N.Y., driver is a regular in the big-block at Albany-Saratoga Speedway and races a small-block at Lebanon Valley Speedway.

He is known for his heavy foot and The Dirt Track at Charlotte is a perfect place for him.

On his first trip to North Carolina to race he said, “I love the challenge, fast tracks, and seeing as we didn’t run Super Dirt Week this is my Super Dirt Week. We went to Oswego last year, but didn’t enjoy our experience. I think this place fits my way of driving.”


On Thursday he unloaded and what occurred next was a surprise.

Drellos said, “We’d never been here and thought we would have some fun. I would like to qualify, even if it meant through the C or B mains. I didn’t really know what to expect. I am super proud of what happened.”

Continuing he said, “We came out fast. I was the fastest time overall in group hot laps and I knew the car was working and we were okay during the first set of time trials.”

He not only turned quick time in his group for both nights, but also captured two qualifying heats to put him in the draw for his debut at the World Finals.

Reflecting on one of his heat wins he said, “I started on pole and wanted to run my race, but Billy Decker was alongside of me. He’s one of the best. He almost got us if I didn’t make that slide job. We survived. In the second heat we got a good start, a good jump, ran on our own and was able to pace myself at the end.”

Explaining he said, “Controversy can happen sometimes. You get in the cockpit and your goal is to finish the best you can. Mistakes do happen out there, but I will own up to mine.”

Earlier this season the big-block rookie got his first win at Albany-Saratoga.

He knew that the feature on Friday night could be difficult and said, “In a heat race you just put the peddle down and don’t have to lift. However, feature racing is much different. The guys who race all the time have a big notebook about every track and they know how to run the track even before it begins. For me this is our first time.”

Being a new guy he said, “There can be some mental games out there. Many of the veterans know how to do what needs to be done and they know I have much less experience. It can get into your head that you are racing alongside these guys. I’m a rookie, but looking forward to it.”

Drellos indicated it could be a bit overwhelming to be competing against the top names in the sport and noted, “I grew up watching Brett Hearn and now I’m racing against him.”

Anticipating the 40 lapper on Friday night he said, “I want to survive and would love a top ten, but this is going to slick up and I’m running against guys with so much more experience.”

Sadly for the team it was a difficult night. The track slicked over, lines disappeared and as always, it seems, the veterans rose to the top.

Drellos had problems and finished four laps off the pace in 25th in the 29 car field.

However, a first time visitor to Charlotte, timing quick in his group for both nights and winning two heats is nothing for Demetrios Drellos to be ashamed of.