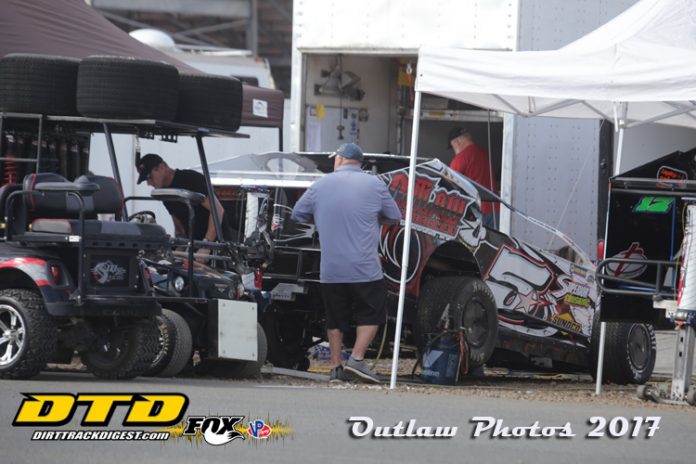 Being a driver and understanding promoters is sometimes a very difficult thing.

It you turn the tables some will say promoters don’t understand drivers.

Well, Tyler Siri wears both hats and is always seeking ways of improving in both areas.

Siri is strictly a race driver this weekend at Charlotte for the World Finals and before racing action on Friday night he said, “Things are going good and I’m happy with the week thus far. We ran second in the first set of heats and third in the second. We don’t have to run a consi on either night. I’ve been here one other time, in my rookie year and finished 15th in one of the features.”

On his hopes for the weekend he said, “I hope we can finish in the top ten each night. This is a wide race track and I can see it getting slick during the night.”

Friday wasn’t so good as he came home 25th on lap down, but he’s set for improvement in night number two.

With the effort he’s put behind Outlaw Speedway in Dundee, N.Y., for Siri the season still hasn’t been all that bad even though he didn’t have the results he would have liked.

He said, “I finished second in points at Five Mile and fifth at Outlaw. Last year I had seven wins, but this year I don’t have any. I just don’t have the time to work on the car they way I need to as I’ve been busy at the track.”

Looking ahead to ’18 he noted, “I want to do a lot more racing next year as I do have some more help.”

Not only will he be more involved in racing next season, but the promoter side of him is excited.

He said, ”This season the Super DIRT Series race put us on the map. We had an absolutely great season. We had the Arctic Cat All Stars and that was fantastic. In fact it was the biggest crowd in 60 years. Our weekly car count was around 115. We had 390 cars for our Fall Nationals and 459 for our Dutch Hoag Memorial event.”

Continuing he explained, “I like to think big. We have a real good facility, but it needed to be rebranded as it had gotten stagnant. It isn’t easy as I want to bring fans back who haven’t been there in 10 or 12 years. We need to make nights and events something special so people will come.”

He hopes some of his 2018 specials will attract a loyal following.

Tyler said, “I’m looking forward to the return of the Super DIRT Series and Arctic Cat All Starts as well as our Spring and Fall Nationals. I am also planning something special with the World of Outlaw Late Models coming for a show and adding a Summer Nationals event at the end of July.”

While Tyler Siri thinks about the promoter side of the racing business, he will have his Teo chassis, Billy the Kid powered Modified in the field for the final Modified race of the 2018 season as the curtain is coming down on Saturday night at Charlotte.