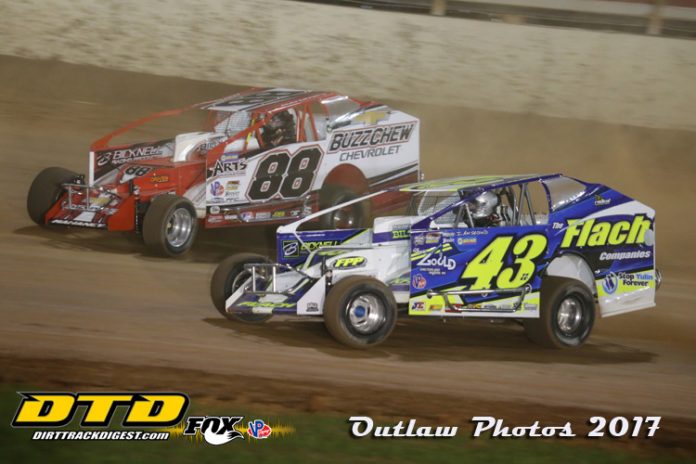 Keith Flach had his car towed off the speedway after a wild accident in the 2016 edition of the World Finals, but this year has been substantially different.  Flach won both of his heat races on Thursday night and concluded Friday night with a fourth place finish in the feature event.

He said, “It was a pretty good night and I’m blessed to have ran so well.”

Looking back on a year ago he explained, “I spun out the first night in the feature and the second night started 29th and about halfway through was running 14th or 15th. I had worked my way up but got caught up in an accident and went over. We also had some motor issues last year.”

However, this year has been different as right off the trailer, Flach explained, “The effort the guys have given has made a difference. We’ve had good speed and this is probably my fourth or fifth time here and I think running the series in my third full year has helped me.”


He entered Friday coming off two heat wins on qualifying night and was in position for the top five draw each night.

Keith drew five, but had moved up to third in the early going as he trailed only eventual winner Mat Williamson and Matt Sheppard.

Taking a look at the race he said, “The first 15 is started to slick up. The top went away while the middle went away awfully quick. It was better early as I just needed to have a tighter chassis to do better. It was real dusty midway through the race and I couldn’t see the backstretch wall coming off two. The track slickened up and I was losing my drive off the corner. I changed my line at the end of the race, but I’ll take it as a fourth place here is okay.”

However, Flach noted, “It is a good start to the weekend as we had a top five and I am okay with that. We’ll get another top five starting spot tomorrow night.