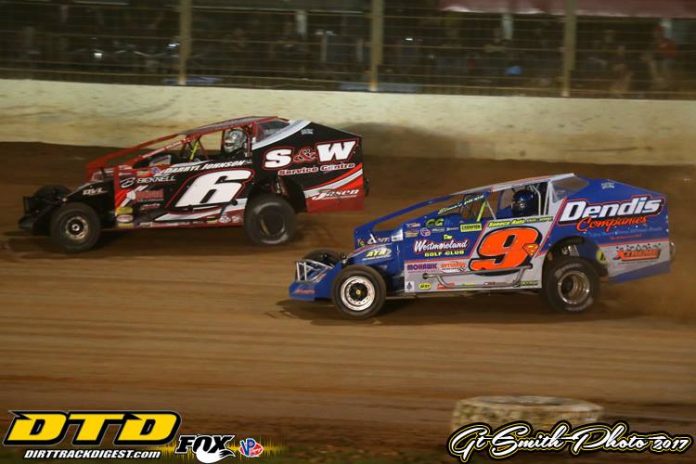 After Thursday night’s qualifying action Mat Williamson wasn’t sure how his World Finals was going to go. It seemed as if they may be over before they really got going as he suffered motor issues. It was tough because the team had two really good starting positions secured.

They scrambled and put together a contingency plan.  Initially Williamson planned on hopping in Justin Haers backup ride. That was nixed when a motor was secured from the Gypsum Racing team. The LJL Kevlar engine was bolted into his Bicknell mount early on Friday with the help of numerous people in the pit area. All of that help allowed Williamson to score his second career Super DIRTcar Series victory and his first at The Dirt Track at Charlotte.  It was a fairy tale of a night for the St. Catherines, Ont., driver.

“This is pretty cool,” said Williamson afterwards. “We were up there on that big stage. It doesn’t really set in until you get out here. It is it really humbling. We had a lot of people help us out to get here and without them I wouldn’t have raced tonight. You can say what you want about Larry (Wight) and John (Wight), or whatever, I know a lot of people talk bad about them but they are two great people. They didn’t have to do this today. This is pretty cool. Everybody that changed this motor today. It was just endless support. It shows a lot about this racing community. You have people that do stuff for you that I’ve never done anything for in my life. They don’t owe me anything. It’s pretty cool.”

The win continues the hot streak that Williamson has been on at the end of the season. He took the checkered flag at the Utica-Rome Speedway to kickoff Super DIRT Week before a runner-up finish in the 358-Modified portion of the action at Oswego. Now he puts the cherry on the dessert with a victory at the World Finals.

“This is incredible,” mentioned Williamson. “I thought Utica-Rome (Speedway) was a pretty big win. My first big-block win at Merrittville (Speedway) I thought was pretty cool, but nothing lives up to this deal. It would have been nice to win Oswego, but to pass Matt (Sheppard) is kind of like a redemption thing. I’m happy with it. I can’t thank these guys enough for sticking it out today. We were grumpy, miserable and didn’t want to be here and didn’t want to be changing motors in the dirt. It all paid off.”

Williamson credited part of the success to the new Bicknell chassis that the team has put together for late season events. It’s proven to be a very stout piece.

“We put a new car together at the end of August,” stated Williamson. “This thing has been pretty good. It’s the same old story. If you bring out new equipment to these big races you are going to run pretty good. This thing is a little bit different. It’s on coils. It’s the new BRP car. It’s what we are trying to go forward with in the future. We had a couple customers out with it and they’ve ran good. This thing seems to be pretty good.”

The redemption that Williamson is referring to comes from his battle with Sheppard at the Oswego Speedway during Super DIRT Week in the Great Outdoors RV 150. Williamson managed to take the lead away from Sheppard only to have him drive back by a few short laps later.  Williamson ended up second.  On Friday night at The Dirt Track, Williamson took advantage of an early restart to get by Sheppard on the top of turns one and two. He never relinquished the lead from there.

“The original start and first restart there he (Sheppard) pulled away from me,” cited Williamson. “I didn’t think we had a shot. He had a pretty good race car. We went with a little harder tire. I knew it would come around. I just didn’t know it would be that soon. I figured we’d have to wait 10 or 15 laps. That restart there we restarted better than we had the previous two and pulled alongside of him. I was beside him getting into one and I think I choked up his momentum a little bit.”

Williamson continued to be pressed by Sheppard as they raced in slower traffic as the race went green for the final 30 laps of the 40-lap distance. At times traffic was extremely thick, but Williamson maintained while keeping Sheppard at bay.

Not only have the wins given Williamson’s team a nice boost in the pocketbook, they’ve also bumped Williamson’s confidence. He’s riding at an all-time high.

On Saturday night, Williamson rolls off from ninth in the second and final event for the Super DIRTcar Series Modifieds at The Dirt Track for the Textron Off-Road World Finals.  He hopes a strong car and some confidences will help him roll into another victory lane celebration. 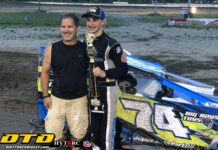 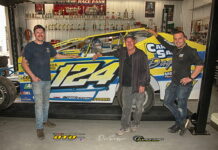