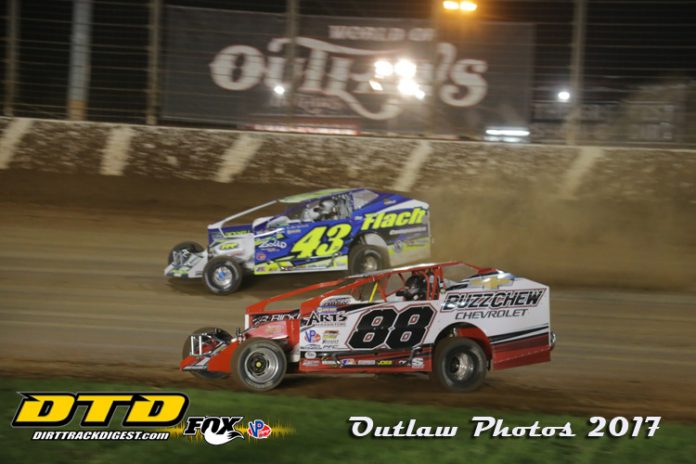 Although Keith Flach and Mike Mahaney didn’t walk out of The Dirt Track at Charlotte with feature wins, both of them came away with a pair of top five finishes on the weekend after winning their respective heat races on Thursday night. It was a career weekend for both drivers at the 2017 edition of the Textron Off Road World Finals.

Flach’s weekend ended with a second place finish in the 40-lap Super DIRTcar Series finale on Saturday night after a fourth place run on Friday night.  He was very thankful for the strong weekend to wrap up the season.

“It was a very good weekend,” stated Flach on Saturday night. “We were really blessed this weekend. I have to thank God first, he was watching out for us with everything going on this weekend. I got to thank Him. I got to thank my team. They gave me a great car to start the weekend off. We’ve always had a little bit of speed down here, but last year we had motor problems. We always had decent speed, but qualifying is so important here. The heats were pretty hammer down on Thursday. To get those two wins was crucial and the top five redraw definitely helped. A fourth and second, and second tonight to a guy that won 40 races (Matt Sheppard), it’s a phenomenal cap to our year. I couldn’t be more proud of my guys.”

It was Flach’s best ever finish with the Super DIRTcar Series regulars as he gets closer and closer to his first series win. As mentioned, Flach chased the 2017 series champion, Matt Sheppard, for the entire distance. He had multiple opportunities on restarts to start next to Sheppard. Sheppard was extremely strong on restarts. Then, during the longest green flag run, Flach inched closer several times, but he never could get up alongside to make the pass for the lead.


“Once we got running it took us a little bit to get a rhythm going,” cited Flach. “If I had a good enough start I was going to try and drive it in there a little harder getting into one if was close enough, but I wasn’t ever close enough. Once we got strung out it seemed like it took me a couple laps to get a better rhythm going than him which I’m sure is a lot more experience. Once we got rolling I got comfortable, found a decent line. I think we needed a little more lapped traffic at the end to help out. They all moved down to the bottom which left us the middle and top which was good for me in one sense, but in the same sense that was where he was running too. Second place to Matt Sheppard, I’ll take it. It’s a good cap to the year. We’ll go into the off-season on a high note.”

Like Flach, Mahaney was strong during weekend scoring a fifth place finish on Friday night before backing that up with a solid third place effort with his Buzz Chew Chevrolet sponsored Bicknell. It was a career best weekend for Mahaney as well and it continued the solid conclusion to the season for the team. They started clicking midway through the year and never slowed down with multiple podium finishes to close out 2017.

“Things have really been rolling,” commented Mahaney. “We got a lot confidence right now. Yesterday, here at Charlotte, we were a little off in the feature. We made some adjustments that we wish we would have made yesterday. They really stepped up. That helped out a lot. I think we were really right there at the end. If there was a little more time and some more leeway with the lapped cars we were there. They kept coming out to the wall on the straightaways at the very end when we were gaining on the leaders.”

Mahaney credited the team’s strong effort off the trailer with the weekend results, but admitted that the lack of experience in the feature hurt him a little bit.

“It really sets you up when you qualify well,” he said. “We rolled out of the trailer with the perfect race car. Then, when the track changed, we really weren’t prepared for what it does when it does that here because half the time in the past I didn’t qualify. I’ve only been here three times. For the experience we have, that was a phenomenal run. Two top fives, one of them a top three, and I got to sit on the podium a lot of times this weekend in front of a huge crowd. I had a great time. It was an awesome experience.”

Mahaney goes into the winter with confidence and some high hopes as he looks ahead to 2018.

“I’m looking forward to next year,” mentioned Mahaney. “This is our last run before we go to Volusia. These guys are doing an awesome job. I’m feeling like we are going to have a big season next year. We are not going to stop over the winter. We are going to keep working hard. It’s really nice the way things went.”