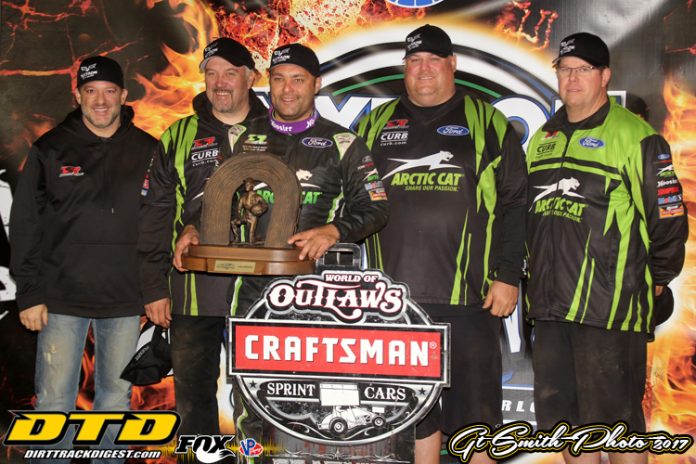 You would think it would be old hat for a nine-time champion to stand on the podium holding the championship trophy high in the air.

However, that is not the case with the newly crowned titleholder of the Craftsman World of Outlaws Sprints.  Donny Schatz concluded the season on Saturday night with a disappointing second place finish.  He led most of the race only to have David Gravel pass him on the final lap.

In regards to titles and the pressure that goes with running for the Tony Stewart Racing organization along with the quest, he said, “Pressure plays a big part in it if you want to be successful. I put pressure on myself 24-7, 365 days a year. You have to deal with it. Tonight I made mistakes and conditions made if iffy for me to see the cushion and I hesitated. You can’t make mistakes.”

Consistency wins you titles and this season there were 20 feature wins, numerous top three finishes and several top fives.

As far as titles goes he said, “It might be just me, but you think that the first one is the best. However, once the season ends and we prepare for a new season I forget about winning the title and try to win the next one as though it was the first title.  I want to do that all over again.”

The champions said, “We just came out of the box so hard and it was important.”

In regards to the 2017 title, Schatz explained, “Florida was good and usually it isn’t for us. It was a fun Speedweek (at Volusia), we had momentum and did good. We picked up the pace later on in season. We were finishing fifth, sixth or seventh, but that isn’t what this team expects to do.”

He continued, “The summer was a little slow, but then we rallied with the Nationals and got back to the top three on a regular basis. The last month has been incredible. Everything was dialed in for Williams Grove, Port Royal and here. We had a great end of season.’”

Continuing he noted, “I really have to thank everyone involved as they work so hard to make this successful. The car is top three on a regular basis, we are competitive and never drop out and that is what wins championships.”

Schatz was thankful for the opportunity and all the successes that have come his way.

“I love this sport,” he said.  “I love racing this car with the team I am with. I would like to continue doing this for as long as possible. I am blessed with the opportunity and I love every aspect of this sport.”