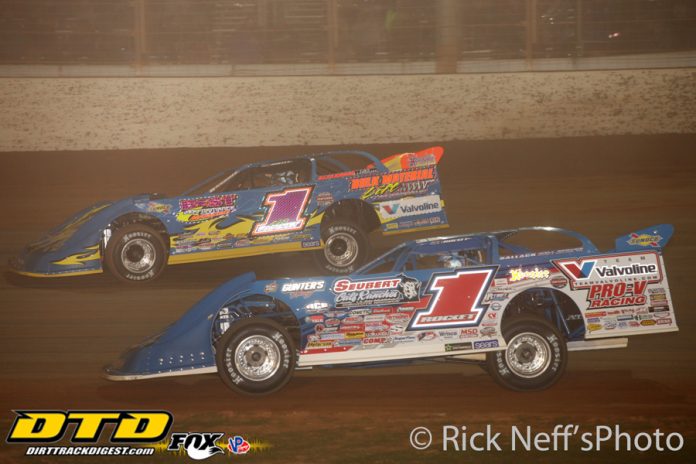 Brandon Sheppard came home in fourth at The Dirt Track at Charlotte on Saturday night in the final World of Outlaws Late Model race of the season.

The soft spoken Frankfield, Ill., driver started a new adventure during the off-season and it ended up as a tremendous success.  After spending the previous seasons chasing the Lucas Oil Late Model crown, Sheppard made the switch to run with World of Outlaws in 2017.

Sheppard, standing alongside his car awaiting the championship crowning, said, “This means a lot to me. I knew these guys before we got together.  I have to thank Mark Richards and Steve Baker for the belief they had in me. I knew going in that knowing them would be a benefit to me.”

Continuing he said, “They gave me an opportunity and went out on a limb hiring me.”


In regards to pressure of facing this type of situation with such a legendary team he said, “I put the pressure on myself to win and we did.”

The goal was to win 30 races for the season, but Sheppard explained, “We had 29 wins and 18 of them were World of Outlaw events.”

Sheppard filled the shoes of multi-time champion Josh Richards in the Number 1 Rocket House Car and said, “I had some really big shoes to fill, but we set goals for ourselves.”

Those 18 wins tied the one season record for victories, currently held by Richards, and he really wanted that record here at Charlotte.

Brandon said, “We had the championship locked up early and came here this weekend to simply win. Here you really have to work. This track is fast.”

He won on Friday night before his fourth place to wrap up the weekend.

In his 10 years behind the wheel of a Late Model Sheppard finally made his national presence known the past few years.

He said, “I ran Lucas Oil for two years and this was my first on the World of Outlaws. It was an amazing year.”